Spanish naval officer, was born at Ontaneda, Santander, on 1 April 1759, the son of Joaquín Antonio de Bustamante and Clara Ignacia Guerra de la Vega. He enrolled in the Spanish navy as a guardiamarina* at Ferrol at the age of eleven and after serving in several ships he joined the store-ship Santa Inés in November 1777, sailing in her to Manila. On the return voyage to Spain she was captured by a British ship on 22 September 1779 and taken to Cork, Ireland, where Bustamante remained until the following year, recovering from the grave wounds received in action. He saw action at the Battle of Cape Spartel on 20 October 1782 against the British fleet commanded by Admiral Howe. On 10 September 1788, shortly after being promoted to capitán de fragata, he and Capitán de fragata MALASPINA submitted to the Spanish Government a plan for a political and scientific voyage around the world. On the proposal being approved, Bustamante was appointed as commanding officer of the corvette Atrevida and second-in-command under Malaspina of the expedition, which sailed from Cadiz on 30 July 1789. After calling at Montevideo and Port Egmont in West Falkland, the expedition rounded Cape Horn and worked its way slowly up the west coast of South and North America, during which Bustamante was promoted capitán de navio and several times acted independently of Malaspina. On 20 December 1791 the expedition sailed for the Philippines, spending the next six months surveying these islands. Thence the expedition called at the British convict settlement at Port Jackson in New South Wales, before setting off across the Pacific once more for Callao. Here Malaspina learnt that Spain was at war with France and decided that the two corvettes should sail independently to lessen the risk of losing all the expedition's records if they should encounter French frigates. 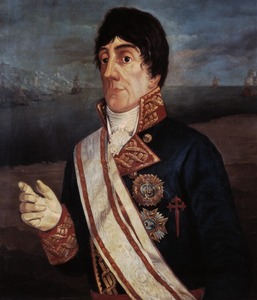 Bustamante was ordered to proceed to East Falkland to report on the Spanish settlement of Puerto de la Soledad (Port Louis) in Berkeley Sound and then to search for the Aurora Islands, reported in 1762 by a Spanish frigate of that name to lie 35 leagues (105 miles) east of the Falklands. On 23 December 1793 Bustamante sighted Beauchêne Island and passing to the south worked his way cautiously up the south-east side of East Falkland, identifying Shag Rock, south of Lively Island, until he was met by a launch off the entrance to Berkeley Sound, which he entered on Christmas Day, anchoring the following day in Port Louis Harbour. Here he found the snow* Santa Eulalia, commanded by Don Pedro SANGUINETO, who was also acting as governor of the Spanish settlement. While parties were sent out daily to survey Berkeley Sound, Bustamante drew up a report on the settlement, which he noted consisted of thirty-eight convicts and 102 seamen, the crew of the Santa Eulalia. He commented that very little effort was being made to grow green vegetables and that the prohibition of women in the settlement was an issue much debated by all the Governors of the colony since its foundation. Opinion supporting the ban, however, finally carried the day, against all the dictates of reason and experience. Bustamante commented: 'I will pass over the dreadful offences committed because of the lack of that sex which appears to have been created by Providence solely to prevent them. One cannot but be horrified by such crimes, as repugnant to Nature as they are offensive to civilized society'. Bustamante hoped that the Real Compañía Marítima would set up a large scale fishery (i.e. for whaling or sealing) in the Islands as a counter to the number of foreign ships which Sanguineto reported were visiting the Islands every year for the fishing, resulting not only in the loss of revenue to the Spanish crown, but also surreptitiously killing cattle for food during the winter.

On sailing from Puerto de la Soledad on 11 January 1794 Bustamante began a search for the Aurora Islands, being convinced of their existence from the Aurora's report and subsequent apparent sightings of these islands by other Spanish ships. So when he sighted 'islands' in the approximate position reported by the Aurora, he accepted them as genuine islands and fixed their position by astronomical observations, and so in due course they found their way onto navigational charts. However, in 1820 James WEDDELL made a comprehensive search for these islands, reaching Bustamante's position in excellent visibility 'without observing the least appearance of land'. Weddell first considered the possibility that Bustamante might have sighted icebergs grounded on Shag Rocks, but concluded that the difference in longitude of 6° between Bustamante's position for the Auroras and the known position of Shag Rocks was too great to admit of this possibility, concluding that Bustamante must have sighted icebergs incorporating earth, similar to ones he {Weddell} had sighted far to the south. 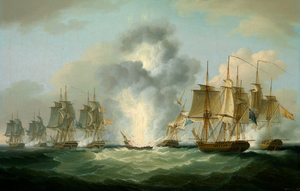 Bustamante extracted himself with some difficulty from an extensive ice field and duly rejoined Malaspina in Montevideo, returning to Cadiz on 21 September 1794 without further incident, from where he proceeded to Madrid to put in order materials from the voyage for publication. Bustamante was promoted to brigadier de real armada in September 1795 and in September 1796 was appointed military and political governor of Montevideo and general commander of shipping in the River Plate, taking up his post in February 1797. He was promoted to jefe de escuadra on 5 October 1802. Considered as the most effective and popular of all the governors of Montevideo during the Spanish vice-regal period, he was relieved from both posts in January 1804 to take command of a squadron of four frigates carrying treasure from Lima to Spain. He set sail from Montevideo on 9 August 1804 flying his flag on the Medea. On 5 October the Spanish ships were intercepted near Cadiz by four British frigates tasked to detain the Spanish squadron and take it to England. Bustamante refused to comply and in the ensuing battle the Spanish frigate Mercedes blew up with a considerable loss of life. The affair created a great stir in Madrid, resulting in Spain declaring war on Britain on 12 December 1804. Bustamante returned to Spain from Plymouth in August 1805. Court-martialled, he was exonerated from all charges and sent to Madrid on 1 June 1807 where he was appointed a member of the Committee for the Defence and Fortification of the Indies. On 29 March 1810 the Council of Seville appointed him capitán general of Guatemala and president of its high court. He was promoted to teniente general de la armada the same year and took up this post on 15 March 1811, remaining there until 1818 and returning to Cadiz in April 1819. On 9 May 1820 he was appointed director-general of the Navy, a post which he held until August 1822. He died on 10 March 1825 in Madrid.