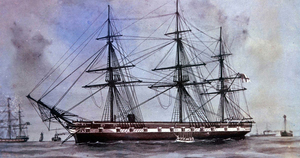 His mother was Sophia (née) Wilson, and his brother was Edward (1844-1929) - the utopian socialist, poet, philosopher, anthologist, and early activist for gay rights.

Alfred was educated at Brighton College, where his father was a governor. He entered the Royal Navy as a cadet on 11 September 1860; became a midshipman 7 March 1862; was promoted sub-lieutenant on 5 December 1866; and promoted lieutenant on 4 April 1870. He was serving in HMS Iron Duke, on the China Station when he joined the Challenger Expedition, as the ship’s first lieutenant, on 2 January 1875.

For his actions, when HMS Challenger was in the Falklands, he was awarded the Albert Medal 2nd Class and the Royal Humane Society Bronze Medal for his attempts to save the life of Able Seaman Thomas Bush in Stanley Harbour. Bush unfortunately died of his injuries soon after his rescue. Bush was from Canterbury, Kent and thirty years old at the time of his death. He was a very popular member of the crew and was planning to get married on his return home.

Eric Linklater, in his book The Voyage of the Challenger (published 1972) graphically describes the incident:

There was a tragic incident to mar the ship’s stay at these islands whose bleak weather and dismal aspect were mollified, for the sailors, by the abundance of fish that were caught, of geese that were killed, and good mutton at threepence a pound, and draught ale and porter at three pence a glass. It was, perhaps, threepenny porter that contributed to the death of a sailor called Bush, for when coming off the shore, late at night, in the steam pinnace, he fell overboard.

The pinnace was close to the ship, but the rain fell so heavily, and so fierce were the squalls of wind, that the two men in the bows of the boat saw nothing. On board, however, Lieutenant Carpenter heard the splash – perhaps a despairing shout - and diving from the gangway swam to the man’s rescue in a bitterly cold sea. Bush had gone down, but Carpenter found him, pulled him to the surface, and someone in the pinnace pushed an oar out towards them. 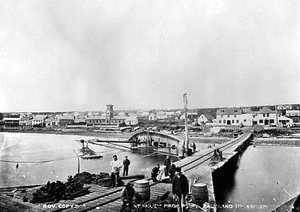 They were picked up, both exhausted, and Bush, despite long efforts by the ship’s surgeons to keep him alive, died within a few hours.

Will you allow me to express in the name of the Community the admiration we feel at your gallant conduct on the occasion when the seaman lost his life in this harbour last Monday night. We all envy that which you must possess – an approving conscience for having endeavoured to save the life of a fellow creature at the risk your own.Will you give us the pleasure of your company at dinner (Saturday) at 6 o’clock?

The citation for the award of the Albert Medal to Carpenter reads:

‘At 10.30 P.M. on the 31st of January 1876, while the Challenger was at anchor in Stanley Harbour, Falkland Islands, in five fathoms of water, distant a quarter of a mile from the shore, Thomas Bush, an Able Seaman, fell overboard from the steam pinnace, which was coming alongside, and sank without uttering a cry. The night was dark, the weather very boisterous and raining. There was a short chopping sea (which rendered swimming extremely difficult), and an outsetting current.

Lieutenant Carpenter, without a moment's hesitation, jumped from the gangway, and swam towards the spot where the man disappeared, which was some twenty feet from the ship, and touched him with his feet under water. He then dived, seized hold of Bush, and brought him to the surface, and supported him from three to five minutes; but Bush being a very heavy man, and encumbered with thick waterproof clothing, and, moreover, being quite insensible,

Lieutenant Carpenter, as he got exhausted with his exertions, was obliged to let him slip down. He supported him with his legs for a few moments, and then they were both hauled into the pinnace, and taken on board the Challenger.  When picked up. they were between forty and fifty yards from the ship's stern, which distance they were drifted by the current and wind. 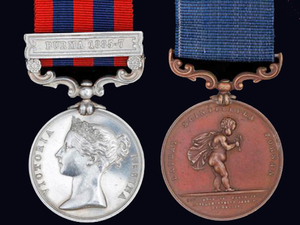 Every effort was at once made by the medical officers to restore Bush, but without success. There were several patches of floating kelp round the ship, amongst, which the strongest swimmer would be helpless, which materially increased the risk, incurred.’

Promoted commander, 31 December 1883, he served in the Sudan Expedition in 1884, he took command of HMS Myrmidon on 10 January 1894. For his service he was awarded the Khedive´s Star medal. He was appointed to the Marine Survey of India, September 1884. During the Third Anglo-Burmese War, he piloted the War Flotilla under fire to Mandalay and Bhamo. For his actions Carpenter was Mentioned in Despatches (London Gazette 22 June1886) and created a Companion of the Distinguished Service Order (DSO). 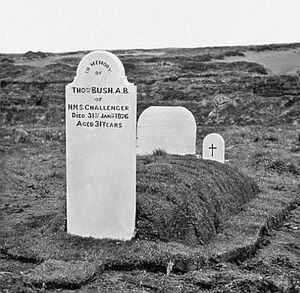 His son, by his first marriage, was Vice-Admiral Alfred Francis Blakeney Carpenter (1881-1955), who in 1913 was awarded the Royal Humane Society's Bronze Medal for saving a life from drowning. He commanded HMS Vindictive during World War I and was awarded the Victoria Cross for his conduct during the Zeebrugge raid on 23 April 1918. 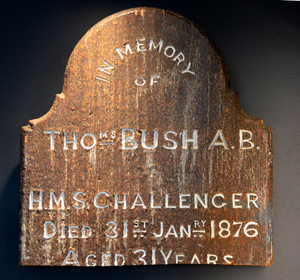 1. The grave markers of a number of graves at Port Louis were removed in the 1980s; some were destroyed, but Thomas Bush's grave marker was saved from destruction and a portion of it is now displayed in the museum in Stanley

2.For the second occasion when an Albert Medal was awarded (in 1948) for an attempt to rescue a seaman who had fallen into Stanley Harbour see the biography of Petty Officer LYNCH.