Spanish naval officer, entered the Spanish navy as a guardiamarina on 26 June 1759. After successive promotions he was promoted to capitán de fragata on 29 October 1781. On 15 September 1782 he was appointed in command of the corvette Santa Elena, sailing in her from Cádiz to Río de la Plata in company with the store-ship Anunciación. 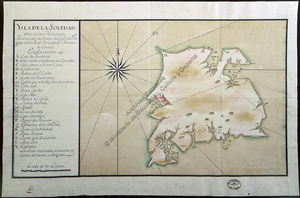 He remained in the station until 1 March 1791, and served three times as comandante gobernador of the Spanish settlement at Puerto de la Soledad (Port Louis) in the Santa Elena, first taking over from Augustín FIGUEROA on 15 May 1785 and staying in post until 25 May 1786,when he was relieved by Pedro de MESA. On 15 May 1787 he took over again from Mesa as governor, serving until 10 April 1788, when he was relieved once again by Mesa. On 29 March 1787 he submitted a manifest in which he stated that the establishment, including the crew of the Santa Elena, consisted of nine officers, 24 soldiers forming the garrison, 88 seamen and 25 convicts. The livestock comprised 2001 cattle, 109 horses and 108 geese. Clairac returned to Puerto de la Soledad for the third time on 16 May 1789, when he took over from Mesa once again, serving until 30 June 1790 when he was relieved by Juan José ELIZALDE. During his time in the Islands he produced a chart of the entire archipelago by sea and land, carrying the necessary horses on board his ship. When he took over as governor in 1785 the settlement had consisted of 34 buildings and its population was under 100, including the garrison. The settlement was also protected by batteries which had been established earlier, two of which he repaired. Livestock of all kinds numbered 7,774 head. Communication between Puerto de la Soledad, Puerto Deseado on the coast and Montevideo was kept up by six warships with orders to protect the Islands from all attacks.

On 19 March 1789 Clairac was ordered to reconnoitre the coast of Patagonia and to visit the ports of San Julián, Santa Cruz and Puerto Deseado to discover whether the British had any establishments there or were employed in the fisheries in those waters; in which case he was instructed to evict them, always showing the greatest civility and urbanity. This he did with the frigate and brig he found at Puerto Deseado, providing them with victuals and provisions from his own stores. In a report to the viceroy Clairac named seven British and one American vessels in Port Egmont, between 1787-90, engaged in whaling and sealing, stating that their business was very profitable. In consequence he showed himself very keen to develop the resources of the Islands and to contradict the idea that the Islands were a sterile possession and their inhabitants of no use to the Spanish crown. It was probably due to him that a fishing company was established by Spain in 1790, its principal factory being at Puerto Deseado, which was extended to the Falklands by royal decree of 15 September 1792. He relinquished command of the Santa Elena on 18 July 1791, having been promoted capitán de navío on 4 October 1789. His final seagoing appointment was in command of the ship San Augustín, in which he served until 28 February 1800.