soldier and member of parliament, was born at Darwin on 4 September 1891, the son of George A Cobb (a brother of FE COBB) and his wife Julia who farmed Lively Island. He was educated at St Paul's School in London and the Royal Military College, Sandhurst. 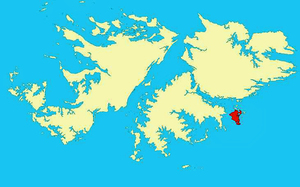 Cobb was commissioned into the Northamptonshire Regiment in 1911 and in 1914 seconded to the West African Regiment. He took part in the campaign to capture German Cameroon and was wounded in January 1915. Later that year he joined a battalion of the Northumberland Fusiliers and was wounded in 1916, winning a DSO. He retired from the army with the rank of captain in 1924.

From 1925 to 1934 he was a member of London County Council and chairman of their education committee from 1932-34. In 1936 he became Conservative MP for Preston, serving until 1945. As 'Captain Cobb', he held a series of junior ministerial posts, from 1938 to 1941 - parliamentary under-secretary of state for Air, for the Board of Trade, for War and for India and Burma.

In 1918 he married Gladys Ryder King: they had one son and three daughters. Cobb died on 14 May 1957. He is the only Islander to have become a British member of parliament.