chairman FIC and racing driver, was born on 2 December 1899, the son of Rhodes Hawtyn Cobb of Esher, Surrey, a director of the Falkland Islands Company and chairman from 1922 to 1929. He was educated at Eton and Trinity Hall, Cambridge, and in the early 1920s developed his love of speed by racing at Brooklands, Surrey, where he established many records including the track lap record of 143·44mph. 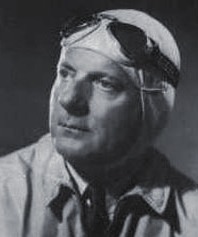 Before World War II Cobb became world-renowned racing his Napier-Railton car in the USA to such effect that he held all the world records for time and distance up to 24 hours.

Upon the outbreak of war he enlisted in the Royal Air Force having learned to fly at Brooklands but to his dismay was prevented from becoming a fighter pilot because his size made it difficult for him to get in and out of cockpits. It was not until 1943 that he flew regularly as an Air Transport Auxiliary ferry pilot.

After the war Cobb resumed racing and in 1947 at Utah, USA increased his own world land speed record from 369·7mph to 394·2mph in the process becoming the first man to exceed 400mph for which he was awarded the Segrave Trophy. 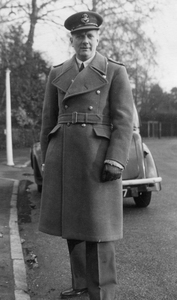 Cobb was a big man in both stature and status but extremely modest and shy. His profession was that of a skin and fur broker and he was joint managing director of Anning, Chadwick & Kiver Ltd in the City of London which sold the colony's output of sheepskins and hides. Before the war Cobb was commissioned by the Soviet government to sell the annual Russian pelt stock.

He visited the Islands in 1946, when he flew from the newly opened Heathrow Airport to Montevideo and sailed on to the Islands on the maiden voyage of SS Lafonia (formerly SS Perth).

He married Elizabeth Mitchell-Smith in 1947 and was devastated when she died from Bright's disease 14 months later. He later married Vera Henderson in 1950 and it was this event and the fact that he had just been elected chairman of the Falkland Islands Company that resulted in an impassioned plea by the managing director of the Company for him to abandon his attempt at the world Water Speed Record in 1952. 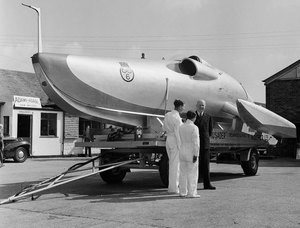 Cobb had not previously been involved on water but was determined to attempt the record on his boat Crusader. On 29 September 1952 at Loch Ness the boat exceeded 200mph but then crashed killing Cobb.

The eulogies were many but perhaps are best summarised by the Duke of Richmond who described him thus:

An Englishman becoming very great and carrying his fame with ease quite impossible to anyone with a trace of vanity or conceit. In such a man of action and achievement his intense wisdom could perhaps be expected but it was accompanied by a rare gentleness and sense of humour which made his companionship so much a joy to his friends.

Cobb came from a family with strong ties to the Falkland Islands stretching back to 1867. His father died in 1930, the year after John joined the Board of Directors.

His own death in 1952, a fortnight after his appointment as chairman, was a great loss to the Falkland Islands Company.

From the Aberdeenshire Press and Journal 19 September 2019

‘The discovery of the boat used in a tragic speed record attempt on Loch Ness has brought to an end a “17-year quest” by experts. Dramatic underwater footage has emerged of the jet-boat Crusader, used by John Cobb in his tragic world record attempt 67 years ago. 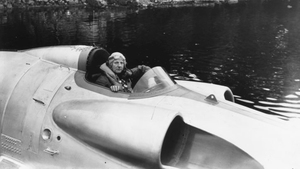 John Cobb in the cockpit of Crusader...

Mr Cobb was in the midst of attempting to break the world water record when disaster struck on September 29, 1952.The Crusader hit a wake and crashed, killing Mr Cobb in the process.

His body was discovered on the surface, but only small fragments of the vessel were recovered, with the main body sinking to the depths of Loch Ness. The discovery of the impressively intact hull was made by the production crew of a new instalment to the National Geographic Drain the Oceans TV series.’

“It is one of those bittersweet moments. We have succeeded in what we set out to do but it is then you realise you are looking at a tragedy, and that was not lost on us. I was highly surprised to see how intact the vessel was.” 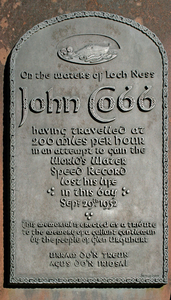 John Cobb's memorial on the shore of...

“John Cobb was a national hero as the holder of the land speed record and he went down very well in Drumnadrochit, where he refrained from running on Sunday’s.