Camp manager and artist, was born in Liverpool in 1826, son of John Pownall DALE and his first wife Mary, née Astley. He was educated in England and Germany and accompanied his father and stepmother (Martha Seacombe Dale) when the former took up the post of FIC Colonial Manager in Stanley in 1852. His father appointed him Camp manager. 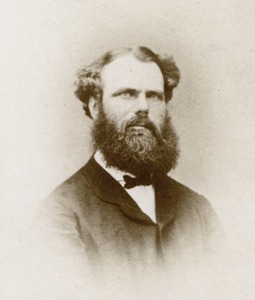 He resigned his duties on the dismissal of his father at the end of 1853. It seems that the Dale family remained some time in Stanley before leaving for England. First his parents left, and then, according to a letter he wrote to María Lafone, William was due to follow at the end of July 1855, on board the Birmingham bound for Cork. William married his stepmother's sister, Harriet Jane Lafone (c.1809-83), whose brother was Samuel F LAFONE, on 15 November 1855, in the Church of St Mary the Virgin, West Derby, Liverpool, where Harriet was still living in her widowed father's home. She was baptised the day before the wedding. The witnesses at the marriage included Alexander LAFONE and his wife Emily.

At some time afterwards, William returned to Uruguay with Harriet, where he built his own house and continued to farm. Dale died in Buenos Aires, aged 42, and was buried in the Victoria Cemetery on 18 November 1870. The cause of death is stated in the burial register as cancer. There is a strong family tradition that he died as a consequence of complications following a fall while drinking mate, and the metal straw (bombilla) which he was using penetrating the back of his throat. Harriet returned to England and lived at Sale, Cheshire, until her death in 1883. There were no children of the marriage. 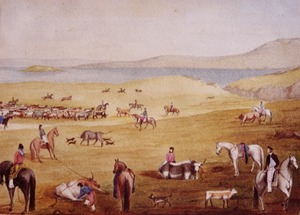 William Dale was a talented watercolourist. His paintings, dating from the years when he lived in the Falklands, are contained in a sketchbook which is still in family hands. The watercolours show country scenes, gauchos, cattle, corrals and huts and are a unique record of life in the Falklands Camp in the 1850s. Several were reproduced in Joan Spruce's Corrals and Gauchos and others (unattributed) appear in R L Molinari's Biografía de la Pampa, Buenos Aires 1987.