English mariner and writer on navigation, was born and bred in Devon at Sandridge in the parish of Stoke Gabriel, near Dartmouth, where, as a child, his neighbours were the three Gilbert brothers and their half brother, Walter Raleigh. Humphrey Gilbert was to publish a Discourse for a discovery for a new passage to Cataia (China) in 1576 and to claim Newfoundland for Queen Elizabeth in 1583, whilst the youngest brother, Adrian Gilbert was also a keen promoter of voyages of exploration. Davis was known to Dr John Dee, the famous polymath, cosmographer and authority on the art of navigation, who had earlier advised Frobisher before the Arctic voyages of 1576-8. 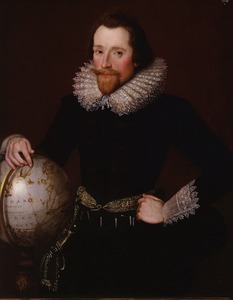 To set Davis in context, it needs to be remarked that after the discovery that a huge landmass (the Americas) blocked any possible direct westward sea route to the Far East, the seamen of Spain and Portugal established south-westerly and south-easterly sea routes there, which left other European seafaring nations to seek for northerly ones. In the case of England and later Great Britain, the quest for a North West Passage intermittently over the centuries became almost a national preoccupation, even when by the nineteenth century the existence of such a sea route had little commercial significance. Davis must be counted as an early pioneer in this quest. He discovered what became known as Davis Strait between Greenland and what is now Arctic Canada, carefully charting his route and thus enabling his successors to sail further than he had been able to do during his three Arctic voyages in the reign of Queen Elizabeth.

It was in the course of his fourth voyage to find a passage, in 1591-93, this time in a south-westerly direction via the Strait of Magellan and into the Pacific, that his vessel the Desire in mid-August 1592 was 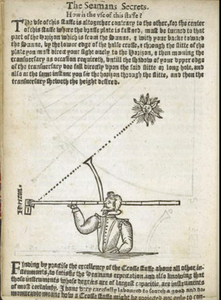 The Backstaff (or Davis Quadrant) as...

driven in among certaine Isles never before discovered by any knowen relation lying fiftie leagues or better from the shore East and Northerly from The Streights: in which place, unless it had pleased God of his wonderfull mercie to have ceased the winde, wee must of necessitie have perished. But the winde shifting to the East, wee directed our course for The Streights ...

These were undoubtedly the Falklands and Davis has been credited with their discovery by his biographer, Sir Clements Markham (1889) and by the Oxford Companion to Ships and the Sea (1979). However, in the Hakluyt Society edition (1880) of Davis' voyages and works, the editor, Albert Hastings Markham, remarked in a lengthy footnote that 'there is very conclusive evidence to prove that the Falkland Islands had been discovered long before the time of either Davis or Hawkins, and called the Ascension Islands, but by whom it is difficult to decide'. He concludes, after reference to a number of globes and charts in which these islands apparently feature, that 'the honour of their discovery must belong to some unknown foreign navigator'. This hypothesis has been followed up (see First DISCOVERERS) by the modern scholar, Graham Pascoe, who cites maps by Pedro Reinel c1519 and André Thevet, 1586 for a Portuguese discovery, but gives credit to Davis and his crew for being the first Englishmen to see the Falklands, as related in John Jane's account, published by Hakluyt in 1600. Nevertheless, it may be prudent to remember that features on early maps and charts do not always exist, as Captain Cook often found during his great voyages. Failing an accompanying Portuguese narrative, as Clements Markham pointed out, we may still be correct in giving credit to Davis for the first sighting of the Falklands. 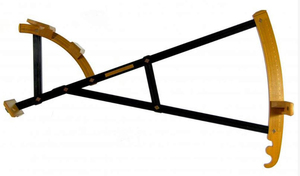 Davis not only practised navigation, but wrote about it. His book The Seamans Secrets went into eight editions between 1594 and 1657. It was illustrated with drawings, one of which shows the use of the back staff, which he invented. In 1595 he published The Worldes hydrographical discription in which he endeavoured to prove that all lands were habitable and all seas navigable. Sadly none of his charts survive.

He made three more voyages, all to the East Indies. The first was with the Dutch in 1598-1600. The second was with Sir James Lancaster on the historic first voyage of the English East India Company, 1601-03. His last voyage was as pilot with Sir Edward Michelborne in 1604-05. He lost his life at the eastern end of the Straits of Malacca on 27 December 1605 at the hands of Japanese pirates. So died a skilled scientific navigator and pilot, one of the great seamen of the reign of the first Queen Elizabeth.

See:  The life of John Davis - The Navigator