The Falklands first appear on maps from the mid 1520s, but there survives no written record of their discovery. Many people have therefore felt entitled to say on behalf of some chosen candidate, ‘ he discovered the Falklands' though in fact all claims so far made on behalf of people whose names are known can be shown to be untrue. 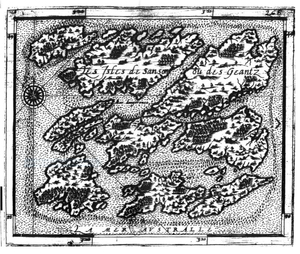 The claim for the earliest discovery in chronological terms has been made on behalf of Fuegian or Patagonian tribesmen centuries or even millennia ago. Evidence for that claim was provided by the warrah, the Falklands fox, extinct by the 1880s which was remarked upon by many visitors in the same breath as they levelled their muskets at it. Fuegians or Patagonians may have been blown across to the Falklands in their canoes carrying tame hunting dogs (warrahs) with them. There is naturally no record of such an event but it should at least be borne in mind - the real first discoverers of the Falklands may have been very humble indeed, and they may have arrived at any time from about 10,000 years ago, since it is not known when the warrah arrived in the islands (by contrast, the fur seal has been shown to have been present on Beauchene Island about 11,000 years ago).

Geologists have established that there was never a land bridge by which the warrah might have reached the islands, so the canoe-passenger theory seems the most likely route by which it arrived. The theory that it rode on ice-floes or rafted without human participation is weaker - if foxes arrived on ice-floes other vertebrates such as pumas or mice could have done the same. But the Falklands never had any other indigenous vertebrates, which argues in favour of the canoe theory: pumas and mice would not have been such likely occupants of a canoe. However, even if the warrahs did arrive by canoe, we shall never know whether the canoes' owners survived the journey - perhaps the human occupants died before the warrahs disembarked, and hence never saw the Falklands. So this theory is doomed to remain unprovable, while at the same time also remaining un-disprovable.

The same is not true of the next claim, first advanced by the retired Royal Navy submarine captain Gavin Menzies in 2002: he claimed the Falklands were first discovered in 1421 by one of the treasure fleets sent out by the Chinese Ming emperor Zhu Di. These fleets, with some ships larger than Nelson's Victory, really did sail around the Indian Ocean between 1405 and 1431, but the idea that they visited the Falklands is based on mistaken interpretations of early maps. Menzies claims that the Piri Reis map of 1513, now in Istanbul, shows Patagonia, the Magellan Strait and also a compass rose placed on the Falklands by the Chinese for navigational purposes. In February 2006 he presented another map which he claims is a copy made in 1763 of a Chinese map of 1418 showing the whole world. Both of these claims are untenable - the Piri Reis map only goes down to Río de Janeiro (what Menzies takes for Patagonia is in fact Brazil), while the other map is a Chinese copy of an 18th-century European map. Menzies's claim is thus not only disprovable but indubitably disproved.

The next claim in historical sequence is that made on behalf of Amerigo Vespucci, the man after whom America is named, who explored the coasts of America in two voyages between 1499 and 1502. Unfortunately for him, his accounts were pirated and published in forged garbled versions, one of which, known as the Soderini letter, contains a brief mention of sailing north-east in a south-westerly storm from somewhere in Patagonia and sighting twenty leagues of a bare coast. This has been taken to be the Falklands by many writers going back to BOUGAINVILLE in 1771, but it is a myth - the direction of sailing makes it impossible that any islands were the Falklands, and the entire text is a forgery anyway.

The best evidence for the real first discoverers of the Falklands is found in two maps with a Portuguese connection: the Pedro Reinel map of around 1519 now in Istanbul, and André Thevet's engraved map of 1586 in Paris, based on a Portuguese original. Thevet's accompanying text says he obtained the original of his map from an old Portuguese captain in Lisbon, who had been with the first visitors to the Islands, some Portuguese accompanying Magellan in his voyage. There is abundant evidence that Magellan's expedition did not visit the Islands, so perhaps the old captain was upgrading his map to get a better price. Judging by the joint evidence of these two maps, the Falklands were first sighted by an otherwise unknown Portuguese expedition in around 1518-19, which explored the north coast and sailed down Falkland Sound but did not see any outlying islands. Several Spanish and Portuguese maps from the mid to late 1520s show the islands as little blobs or dots.

However, the Pedro Reinel and Thevet maps disappeared into archives and only emerged in the late 20th century, so in their absence various other first discoverers were put forward. The earliest were the crew of the unknown Spanish ship christened Incognita by Julius GOEBEL, who spent several months in 1540 among some islands that can only have been the Falklands. But since they recorded that they had maps that showed the islands, they were obviously not the first discoverers.

The next people to see the Falklands, over half a century later, were the explorer John DAVIS and his crew in the Desire. On 14 August 1592 they were blown out from Port Desire (Puerto Deseado) in a storm, into ‘some islands never before discovered by any knowen relation', which must have been the Falklands. Davis was long regarded in Britain as the first discoverer of the Islands, but that is clearly disproved by the Pedro Reinel and Thevet maps. Davis and his men were at any rate the first Englishmen to see the Islands, and their account, published in London in 1600 by Richard Hakluyt, was the first printed reference to the Islands.

Davis was followed by Sir John HAWKINS who sailed along the Falklands' north coast in the Daintie on 2 February 1594 and named the Islands ‘Hawkins' Maidenland'. He sighted what is now called the Eddystone Rock at the northern entrance to Falkland Sound and christened it the ‘Condite Head', since it looked like a conduit head, a well bringing piped water into the City of London.

On 24 January 1600 the Dutchman Sebald de WEERT sighted the Islands, and his mention of them was spread widely by maps, though mapmakers had trouble with his name, calling the Islands the ‘Iles Sebaldes', the ‘Sebaldines', the ‘Sibble de Wards', ‘Los Selvajes' and the like. Until recently he was often wrongly credited with the first discovery of the Falklands.

The Islands were sighted on 27 January 1690 by the captain of the Welfare, John STRONG, who called them ‘Hawkinsland'. That day some of his men landed on one of the islands off the north coast of the Falklands, and again on 29 January somewhere near where Port Howard is today. This was formerly described by some writers as the first landing on the Islands, but Strong's men had clearly been preceded by over 170 years by the Portuguese expedition, and by some 150 years by the crew of the Incognita.

Finally, in the early eighteenth century the islands were seen by many French navigators from St Malo in Brittany, who knew nothing of earlier accounts and thought they were the first discoverers. On 19 January 1701 one of them, Jacques Gouin de BEAUCHENE, sighted the island that bears his name, and others described the Sea Lion Islands, which may perhaps not have been seen before, so the French were not the ‘first discoverers' but may have been ‘later discoverers' of previously unknown islands. Their accounts caused the islands to appear on French maps from about 1705 onwards, and led the mapmaker Guillaume Delisle to christen them Les Iles Malouines, (the St Malo Islands) on his maps of 1720 and 1722. The name is still used in French (alongside ‘Les Iles Falkland')' and has been used in Spanish from the later 18th century, first as ‘Islas Maluinas' and from about 1805 as ‘Islas Malvinas'.

To sum up: unless more documents emerge, the first discoverers of the Falklands must be presumed to have been Portuguese, in about 1518-19. All these claims are analysed in detail in The Falklands Saga by Graham Pascoe and Peter Pepper (forthcoming).