navigator and fur trader, first came to prominence when he served as armourer in the Discovery during COOK's third voyage. Subsequently he appears to have commanded a merchant ship. When the King George's Sound Company was founded in 1785 in order to send an expedition to the north-west coast of America to prosecute the maritime fur trade between there and China, the overall command of the expedition was given to Nathaniel PORTLOCK in the King George, while Dixon was given command of the smaller Queen Charlotte as his consort. The expedition sailed from St Helen's Road, off Portsmouth, on 17 September 1785, anchoring in Port Egmont on 5 January 1786, making its departure from New Island on 23 January. For details of the expedition's visit to West Falkland see the entry for PORTLOCK below. The 'sea pie' Dixon mentions as good eating is probably the Magellanic Oystercatcher (Haematopus leucopodus). Little is known of Dixon's subsequent life, but he is supposed to have died about 1800. 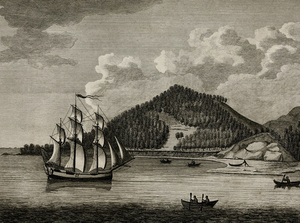 The Queen Charlotte in the Cook River...

George Dixon; (and Nathaniel Portlock); A voyage round the world; but more particularly to the north- west coast of America- performed in 1785, 1786, 1787, and 1788, in the King George and Queen Charlotte, Captains Portlock and Dixon;   London.J. Stock-dale and G. Goulding; 1789