naval officer and fur trader, was born in America. He first came to prominence when he served as master's mate in the Discovery during COOK's third voyage, transferring to the Resolution, Cook's ship, in August 1779. In 1785 the King George's Sound Company was founded in order to send an expedition to the north-west coast of America to prosecute the maritime fur trade between there and China. Portlock was given the command of the King George and the expedition, while George DIXON was given command of the smaller Queen Charlotte as his consort. The expedition sailed from St Helen's Road, off Portsmouth, on 17 September 1785 and, after calling at Guernsey, Madeira and Porto Praya in the Cape Verde Islands, the Falklands were sighted on 2 January 1786. 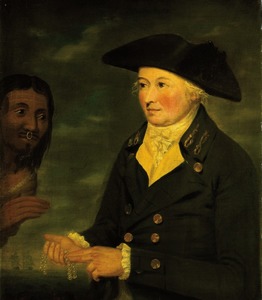 Portlock had informed Dixon of his intention to call at Port Egmont in order to refit and water both ships, even though neither vessel held a chart of the islands. After sighting 'something from the mast-head which had greatly the appearance of a ship under sail', which he failed to identify as the Eddystone Rock, Portlock anchored in Port Egmont on 5 January. Having been at sea on 25 December, 8 January was celebrated as Christmas Day with a double issue of brandy and a walk on shore. The remains of CLAYTON's settlement and garden were found in which there were a few flowers and vegetables, such as horseradish, shallots, a few small potatoes and some celery. A bullock, a cow and several hogs were also sighted. As well as watering ship, seven tons of stone ballast were embarked. On 15 January the American sloop Speedwell, commanded by Captain Coffin, anchored off the ruined settlement. Coffin informed Portlock that he was a tender to the United States, Captain Hussey, which was anchored in a good harbour in Swan {Weddell} Island, together with the Canton, Captain Whippey, both vessels being employed 'in the oil trade' and that Hussey had on board six or seven thousand seal skins. Having consulted Dixon, Portlock decided to make for Swan Island in order to purchase these skins if the price was right, as there was a great probability of them selling well in China. On 19 January, Portlock, with Dixon in company, got under way and set a course for Swan Island. While Coffin proceeded through Byron Sound, Portlock and Dixon rounded the north side of Saunders Island. After anchoring overnight off Carcass Island, they were joined by Coffin, who piloted them into West Point Harbour. The following morning they got under way again and shortly after midday anchored in States Bay {Chatham Bay} on the north-east side of Swan Island, where the Canton, United States, and the sloops Speedwell and Maria, tenders to the United States, were at anchor. Captain Hussey was, however, unwilling to sell his seal skins and so on the morning of 23 January Portlock and Dixon got under way and after rounding the northern end of New Island set a course for Le Maire Strait.

In his published account Portlock described and illustrated three Falkland Island birds. Of these his Rusty Crown'd Plover is easily identified as the Two-banded Plover (Charadrius falklandicus) and his Cinereus Lark as the Falkland Pipit (Anthus correndera grayi). However, both his illustration and description of his Yellow Winged Bunting cannot be reconciled to any Falkland Island bird. 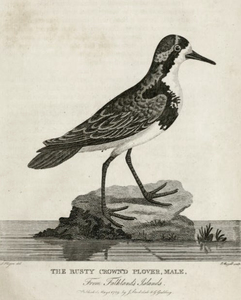 On reaching the north-west coast of America the expedition spent two seasons collecting sea otter skins which were sold profitably in Macau, before returning to England in August 1788. In 1791 Portlock was appointed in command of the Assistant as tender to the Providence, Captain William Bligh, on the latter's successful second voyage to Tahiti to take breadfruit plants to the West Indies.

On the ships' return to England, Portlock was promoted to commander on 4 November 1793. In 1799 when in command of the sloop Arrow he captured the Dutch ship Draak for which he was promoted captain on 28 September 1799. He does not appear to have had any further service afloat.

Due to ill health he was admitted to Greenwich Hospital where he died on 12 September 1817.

Portlock's only son was born at Gosport Hants, on 30 September 1794: as Major General Joseph Ellison Portlock, Royal Engineers, he was a noted geologist and surveyor.

See:  The text of Portlock's book (with Dixon)

Nathaniel Portlock; ( and George Dixon) ; A voyage round the world; but more particularly to the north- west coast of America- performed in 1785, 1786, 1787, and 1788, in the King George and Queen Charlotte, Captains Portlock and Dixon;  London.J. Stockdale and G. Goulding; 1789

Nathaniel Portlock; A Voyage Round the World; Falkland Islands Journal; 2013