headmaster, was born in Duffield, Derbyshire, the eldest of six children of Charles Durose, a gardener/nurseryman and his wife Harriet. He trained as a teacher at Satley College, Birmingham and in 1875 was employed at St Thomas's Day School in Stockport. On 15 October 1877 he became headmaster at the new Woodlane Schools in Fleet, Lincolnshire, where he was accompanied by his mother and five sisters. On 10 April 1882 he was appointed headmaster at Stanley and in May he married Charlotte (nee. Harborne), also a teacher, before moving to the Falklands. They were accompanied by his sister Rose Emma who later married Andrew Julius Winther, master mariner, in Stanley on 30 April 1883. 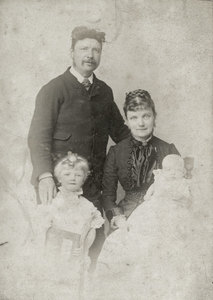 Durose earned £170 pa, while Charlotte earned £30 pa as teacher in the Infants School. They had to cope in primitive facilities, with minimal help. The destruction of the school by the Peat Slip of 1886 forced them to use temporary premises in the Government Store and the old theatre until a new school was built in 1906. Despatches from Governor ALLARDYCE reveal his intolerance of Durose's agnosticism, which he confused with atheism, and by 1905 he was actively trying to remove Durose from his position. He judged that Durose had been in the Islands too long, and that he had not kept up to date with changes in education, but when given the chance to respond to these criticisms Durose had valid answers. Even when Durose finally retired on 11 April 1908, after twenty five years service, Allardyce tried adversely to influence ExCo's award of a full pension. The local newspaper reported the public's appreciation of his years of service and described him as a 'painstaking and conscientious teacher', who was 'always ready and willing to enter into any scheme making for the betterment of the Colony'. Durose was CO of the Falkland Volunteer Corps, director of the Assembly Rooms Company, member of the Mutual Improvement Society and the choir. At times he acted as Crown Prosecutor. He founded a drum and fife band and was a keen gardener.

The Duroses had four children: Muriel Harriet (b1884) who married Roy Stanley Felton in 1907, Winifred Maude (b1887) who married Michael Louis Robson at Fox Bay in 1921, Rupert Frederick Beresford (b1889) and Marion Ethel (b1894). On retirement Frederick and Charlotte returned to England with the two younger children.

They lived in Stockport until his death on 26 March 1933.

Editorial comment: Muriel Durose married Roy Felton in 1907 and they had five children. One of the children was Betty Lois Felton - who later married Sydney Miller in 1933.  See: Image 237