farmer, was training as a mechanical engineer on the London, Brighton and South Coast Railway when his father died. Aged about 20 years, he had to support his mother and his sister, so he travelled to the Falklands to work for Wyrley Birch, the manager of Weddell Island. 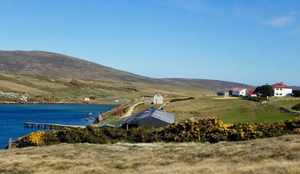 Hennah moved from there to Port Stephens where he was manager for the last 25 years of his life, becoming a shareholder.

Governor ALLARDYCE reported in a despatch to London in 1906 after visiting Port Stephens: 'Mr Hennah...is an excellent type of colonist, resourceful and practical ... there is very little to which he can not now turn his hand satisfactorily'.

Hennah's obituary in the Falkland Islands Magazine and Church Paper of September 1909 reveals a thoroughly conscientious and able man who once ordered a flock of sheep to be dipped eleven times because contaminated sheep had been deliberately let into the same paddock. He was remembered as: 'An interesting man to talk to on any subject' and one who used 'his mechanical knowledge to simplify the difficulties of camp housekeeping' as well as to help his 'brother camp-managers'. 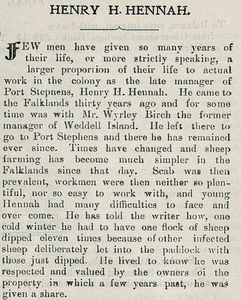 Hennah's obituary in the Falkland...

The marriage of Henry Harrison Hennah and Elspeth Dickson (1888-1954), daughter of John and Agnes Dickson of New Island, took place on 28 June 1888 in the house of the Rev William Philip at Darwin, under the auspices of the United Nonconformist Church (The Tabernacle). Their daughter Elspeth Agnes Lucy Harrison (1889-1964) was born in 1889 at Port Stephens.

Henry Hennah, aged 50, died 7 July 1909 at Port Stephens from cerebral thrombosis and was buried there. He had been in a precarious state of health for some time.

There is reference to a brother, probably Thomas Harrison Hennah, (1867-1938). He was a carpenter at Dyke Island and married Mary Dickson (1868-1951) of New Island, Elspeth's sister. Thomas is remembered in Stanley for having built a boat in the loft of his house at 25 Ross Road East. The side of the house was removed in order to extricate the finished boat.