He was educated at Haileybury and Emmanuel College, Cambridge. He volunteered for war service and was commissioned into the Royal Warwickshire Regiment in 1914, and went into battle in France with the ninth platoon of the old Sixth Foot. He was wounded and invalided back to England. It is probable that this was when he lost the lower part of his left arm. He later served in England with the 11th (Garrison) Battalion of the Oxford and Buckingham Light Infantry, being promoted captain in 1918. 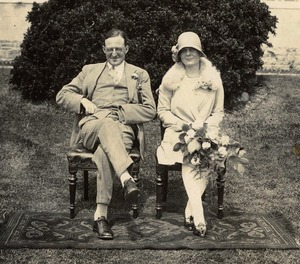 Ellis joined the colonial civil service in 1919, and was chief assistant secretary to the Cyprus Government from 1919 until 1926.

He was appointed acting colonial secretary to the Falklands where he arrived in September 1926, succeeding H HENNIKER HEATON. He took part in many of the activities of the town, and was chairman of the Entertainment Committee during the visit of HMS Capetown when she visited for the unveiling of the Falkland Islands Battle Memorial in early 1927. In May of that year he was sworn in as acting governor on the departure of Lt Col BEATTIE. Governor HODSON arrived the following month. In August Ellis was appointed colonial secretary.

In spite of his amputation, Ellis was a sportsman. He is recorded as playing in a cricket match 'Government Officials against the Rest' in January 1927, and he also played hockey. In early 1928 Ellis was among a group who set up the first Girl Guide company in the Falklands, and served on the committee. Ever since his arrival he had been a great supporter of the Falkland Island Defence Force, and in a farewell speech in 1934, Captain Allan said he had 'gone out of his way to assist in whatever manner possible, no matter whether it had been shooting, football or other matters pertaining to the F.I.D.F.' In his reply Ellis said: 'However long I live and wherever I may be I shall always have my roots in the Falkland Islands, and I shall not forget'.

Ellis's engagement to Molly Clement, daughter of Howard Clement and Mabel, née Bertrand, was announced in March, 1928. In June he broke his leg playing hockey, and had the distinction of being sworn in as acting governor while confined to bed in the King Edward VII Memorial Hospital. They were married in November at Government House by the acting registrar, Capt Amedroz, RN.

They had no children. Ellis and his wife lived at Sulivan House, and lost nearly all their possessions in a disastrous fire in July 1929. According to the Falkland Islands Magazine it was 'only possible to save a few personal things from the back premises'. 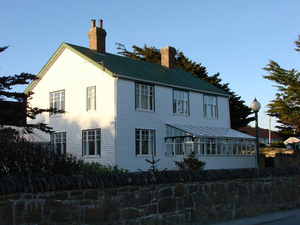 Sulivan House - home of the of John...

Ellis carried out a huge variety of government tasks during his time in the Falklands. In 1930 he acted as local auditor from May to the end of the year, and as registrar of the Supreme Court from July to the end of the year. In 1931 he administered government from February to June, acted as local auditor and as registrar and magistrate in January.

In 1933 Ellis was awarded the OBE. He had three war medals and the Jubilee Medal 1935 and Coronation Medal 1937 for his Colonial Office service. He was on leave for the latter half of 1933, and on his return once more became acting governor, as Governor Sir James O'GRADY had been taken ill.

In late September 1934, after eight years in the colony, Ellis left the Falklands to take up his appointment as colonial secretary in Grenada. The local newspaper, the Penguin of 1 October, 1934 reported that: 'A large gathering of Government officials and general public assembled on the Falkland Islands Company's East Jetty landing stage on Saturday morning to bid farewell to His Excellency J.M.Ellis, Esq., O.B.E. on his departure from the Colony'. At this time his wife was in England undergoing medical treatment, and joined him later.

They were in Grenada for a year, then in 1935 went to Nyasaland and served there until 1948; from 1941 he was one of the three provincial commissioners in Nyasaland and was based at Blantyre.