governor, was born in Bristol of Irish parents on 6 May 1866. He was educated at St. Mary's Roman Catholic School which he left at an early age to work in a mineral factory, but at the age of 15 he was apprenticed for five years to a Bristol chairmaker. In 1887 he married Louisa James, a teacher; she was a great help to him in his studies and in his work. He and his wife were practising Catholics all their lives. They had ten children, three sons and seven daughters. Theirs was a wonderful family life; all the children were taught a musical instrument and on Sunday evenings a family concert was held. 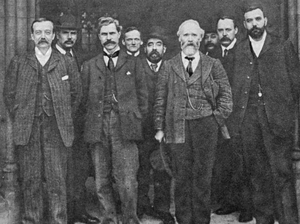 The Labour Movement and Russia

O'Grady worked in various parts of the country for three years during which time he came into contact with socialist ideas and trade unionism. He then returned to Bristol to serve as president of the Bristol Trades Council, and become a member of the City Council. In 1898, at the age of thirty-two, he was president of the Trades Union Congress (TUC) which met in Bristol. In his presidential address, he proposed that a scheme be formed for the political organisation of the trade union movement, and two years later the TUC acted upon this suggestion and the Labour Party was born.

In 1906 O'Grady was elected to Parliament as the Labour member for East Leeds, and held the seat until 1924. During the war years he visited the Western Front and undertook several special missions for the government, including one to Ireland for a recruitment campaign. Perhaps his most important missions were to Russia. After the first revolution of February 1917, he was appointed by the War Cabinet to join a joint British and French delegation to impress on the moderate Kerensky Government the vital importance of continuing the war against Germany. In November 1919 O'Grady, was appointed to negotiate in Copenhagen with the Soviet commissar Litvinov on the exchange of British prisoners of war and the repatriation of British civilians in Russia: ultimately an agreement was reached. O'Grady visited Russia again in 1922, to administer relief with funds provided by the International Federation of Trade Unions for the famine areas around Kazan. He contracted smallpox on his return home. 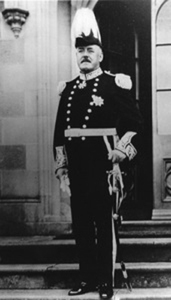 O'Grady was appointed governor of Tasmania in 1924 and created KCMG. Despite some initial criticism of the appointment, it was a great success and he was asked to stay on for a further two years. Sadly, Lady O'Grady was unable to accompany her husband to Tasmania as she was suffering from cancer but two of his daughters accompanied Sir James to Tasmania and Margaret, the younger, remained to support her father in the role of first lady of the colony. Lady O'Grady died in 1929.

In the spring of 1931, after only one month at home since his return from Tasmania, O'Grady accepted the appointment of governor and commander-in-chief of the Falkland Islands and Dependencies. In an article in the News Chronicle of 29 April, he gave his reasons for accepting, namely 'a love of the work of Colonial administration. When I think of the fine work being done in all parts of the world by handfuls of our men, I cannot bear the thought of settling down and doing nothing. It is not in my make up to do so'.

O'Grady arrived in Stanley on 20 June on the SS Darwin. He had been in correspondence with Buckingham Palace since 1917 and spoke of his royal connection at his swearing in:

His Majesty the King has requested me to inform you of his kind interest in you. That may seem a rather far-fetched idea, but most of us follow His Majesty in that respect. We consider this Empire of ours a natural living reality. It is a body politic. It is just as real and just as living as my body is real and living. It is a personality: an entity, representative of our characters and all we stand for. Down in this far away Island in the Southern Atlantic the people of the Falklands have got just those same faculties and qualities that our forefathers had who went abroad for adventure and found it ...You are here in the Falklands and I want you to love the Falklands. To many of you it is your Homeland of the Empire. The more you love it the greater will be your love for the Empire of which it forms a part.

Settling into his new home must have been a lonely time, having no member of his family with him. His daughter Margaret, who had been with him in Tasmania, offered to accompany him but Sir James declined, telling her 'it's no place for a woman'. 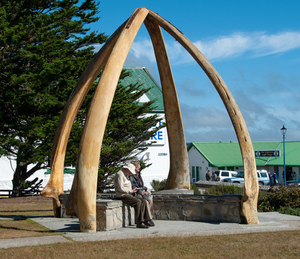 The governor's first public appearance was in August, at the new Power House in Stanley for the ceremonial switching on of the town's electrified system of street lighting. In November he visited Bull Point which is frequented by elephant seals. In January 1932, 'shearing time', the governor made a three week tour of the farm stations by boat, landing at the jetties by launch, 'a rather bumpy procedure' he reports. Sir James continued his letter to the King's private secretary Sir Clive Wigram:

The sheep farmers and their employees are a fine lot of men. Their lonely life makes them reticent, disliking talk, but when one gets them to 'thaw out' their conversation about their work and domestic affairs is indeed interesting. Their children are educated by travelling teachers, employed by the Government, and the respect in which these teachers are held by the parents is a feature that is wholly blessed. I came away from these folks a better man, I am certain, than before I met them. They were kind enough to say that my talk was helpful and pressed that I should make my visits frequent. 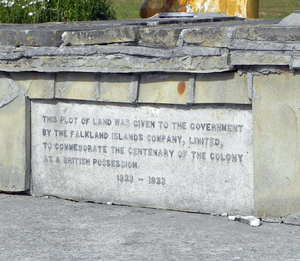 Commemorative plaque on the base of...

At St Mary's Bazaar he spoke appreciatively of the good will between the different Christian missions and, as a member of the Roman Catholic Church, of the heroic work being done by Father MIGONE and the Sisters.

The celebration of the Falklands Centenary in 1933 began with a tribute to the memory of Matthew BRISBANE. The Lafonia carrying the governor and 123 other passengers sailed from Stanley to Port Louis and a wreath was laid at Brisbane's grave where the weather beaten wooden marker was replaced with a new marble gravestone. 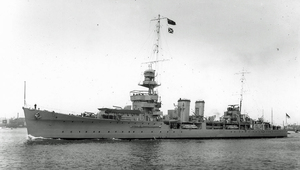 The celebrations continued with a week of festivities described by the Governor in a letter to his daughter Mary (Molly):

Curiously enough we had the weather of the century - a week of glorious, warm sunshine. We had the H.M.S. Durban in, also Discovery II, the latter is the research ship that has, for some time, been investigating sea life and currents.The proceedings opened with a review, under arms, on the large paddock facing Government House. I took the salute in full uniform, afterwards attending service at the Cathedral. Throughout the week, there was horse racing, sports, dancing in the Town Hall every night and a fine display of fireworks. Ninety percent of the total population of the colony were in Stanley for the celebrations.I am persuading the folks to have a "do" every 3 years so that the feeling of mutual regard generated shall be perpetuated. The sheep farmers and their shepherds rarely come in to Stanley, therefore they and the town people are complete strangers. It will be to the good of the colony if they meet every 3 years and have a week of festivities.

He reported to Wigram:

Going back to the Centenary celebrations. I must say that I was agreeably surprised at the behaviour of the men from the camp, having regard to the lonely life they lead and to the fact that many of them had never been in Stanley before, and I took care at the final function on the Saturday night to express publicly my sincere thanks for their behaviour through the week. Of course a few of them quite naturally partook rather freely of the strong - very strong - beer we import and being myself naturally of a cautious turn of mind - you may not believe that - I had about twelve special constables sworn in but gave them definite instructions that they were to arrest no man, no matter what his style of walking might be at the moment, but instead they were to take him to his diggings [ie digs] and get him put to bed. So there were no arrests and no gaoling. 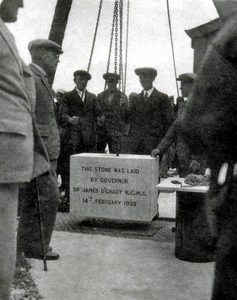 Laying the foundation stone of the...

The Governor laid the foundation stone for a swimming pool, telling Wigram:

Our swimming pool, I am afraid, will not be built yet owing to the lack of finances. However it is a beginning and such a swimming pool is a very great necessity here as there are only about fifteen men and boys in the whole colony who can really swim. I am hoping that some of the better-to-do people will help me with the financing of this project.

The celebrations were appropriately concluded with the gift of a fine silver 'smoking set' from the City of Bristol for use at Government House (the cigar box is still held at GH).

The centenary stirred Argentina's sovereignty claim, as he reported to Wigram:

They will not recognise our passports and insist upon our people when they arrive in the Argentine, taking out another passport. There are some other acts of theirs that while irritating need not be commented upon but the last of their pretensions - the matter of our Centenary Stamps - seems to be about the limit. Our stamps are declared to be invalid when the Falkland Islands' people write to their friends in the Argentine; they are surcharged and a fine is imposed before delivery can be effected. Further than that, they have written to the International Postal Bureau at Berne informing them that in view of Argentina's 'Sovereign Rights' they are to take notice that the Falkland Islands stamps are invalid. Incidentally, from the philatelists' point of view the stamps will become much more valuable as a result of this extraordinary attitude of the Argentine. 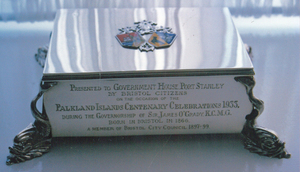 It was announced on 1 July 1933 that the governor was indisposed and had gone in to Hospital. O'Grady departed on 8 July in the SS Lafonia bound for Montevideo and thence for England. He left a farewell message:

I am hoping to be back with you again recovered in health sufficiently to help in carrying through a number of projects that I have in mind leading to more efficient government and increase of the welfare of the people of the Colony. 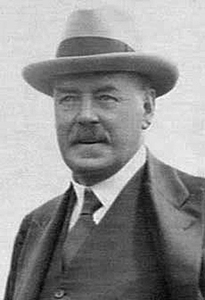 The cause of his 'indisposition' was given in the British press as blood poisoning; he had also suffered for many years from diabetes. After some initial improvement, his health declined and he remained on sick leave, living with his family, until his death in a London nursing home on 10 December 1934.

On the day before O'Grady left for England, the colonial manager of the Falkland Islands Company, LWH YOUNG wrote to his directors in London:

I fear he is unlikely to return, which is to be regretted. I have always found him to [be] reasonable and just; he had a keen perception of the difficulties of the farmers, but has been greatly handicapped during his administration by the legacies left him by his predecessor and by unemployment.

O'Grady's departure meant that the colony was without a governor for 17 months.