businessman, was born in London on 3 January 1891. In 1929, at a time of complete dependence of the Islands for passenger and cargo traffic on irregular calls by Pacific Steam Navigation Company (PSNC) vessels, a position which had existed since termination of the mail contract in 1917, it was desirable that the Falkland Islands Company appoint a new colonial manager with shipping experience. Such a man was Young who was recruited from India where he managed a shipping company. Young became colonial manager in 1929 and quickly reintroduced the Company's steamer, SS Falkland, to external service involving voyages to Montevideo with the wool clip and to South Georgia. In 1930 he negotiated a mail contract with the Falklands Islands Government which enabled the Company to have a vessel specially built for the colony's needs. SS Lafonia began service in 1931, making about eight voyages annually to Montevideo, seasonally connecting with Royal Mail Lines vessels there. Young was energetic and a strong disciplinarian who brought much needed changes to the Company's operations in the Islands. He also improved service conditions for staff, introducing particularly a provident fund scheme based on the level of dividend paid by the Company, and improved pensions. In 1936 it was decided to replace Lafonia with a larger vessel and divert all overseas passenger and cargo trade to her whilst maintaining monthly sailings to Montevideo, thus ending partial reliance on PSNC. The Southern Coast was purchased in 1937 and renamed Lafonia, whilst the existing vessel of that name was renamed Fitzroy. Punta Arenas became a regular port of call and results were satisfactory for the improved service despite promises of cargo trade there made to Young by local shippers not being fulfilled, mainly because of strong opposition from the conference line which exercised their monopolistic position. 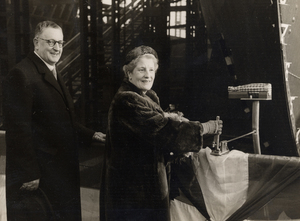 Mr and Mrs LWH Young at the launching...

Young was appointed managing director of the Company in 1938 and made as his successor Captain DW ROBERTS, the Company's senior shipping master, thus emphasizing the importance of shipping to the colony. The war years (1939-1945) were difficult ones for the colony and for Young with increased isolation following the early requisition of Lafonia and her loss in the North Sea. Young submitted to the Board in 1943 an outline of his postwar plans, which included a replacement for Lafonia, and a resurrection of his plan to operate a feeder service with PSNC in the Straits of Magellan without which it was difficult to justify operating two ships. He also strongly advocated the Company taking the initiative of informing the Falkland Islands Government that it was prepared to consider operating an internal air service after the war.

The Company and the colony found overcoming the arrears of maintenance and capital projects caused by isolation and shortage of materials during the war difficult. These problems were not helped by the ill-conceived erection of a freezer at Ajax Bay funded by the Colonial Development Corporation which Young bitterly opposed, particularly for its siting which created difficulties in transporting live sheep. This resulted in a difficult relationship between Young and Governor CLIFFORD. Young was a strong and very effective director of FIC, overcoming disagreements over farming policies between different family interests. He formed a strong relationship with John COBB, the racing motorist and welcomed his appointment as chairman in 1951. He tried hard to persuade Cobb to abandon his attempt on the water speed record at Loch Ness only a fortnight after his appointment but to no avail. Cobb's death in the attempt dismayed Young who was appointed to succeed to the chairmanship, a position he held until retirement in 1958. Although never achieving his goal of breaking into the Latin-American market for shipping, Young did the Company and colony a great service when, following years of problems with cargo delays and losses through pilferage at Montevideo he introduced a charter service of vessels between the UK and Stanley with cargo outward and wool homeward. This transformed shipping results and reduced the subsidy for working RMS Darwin. 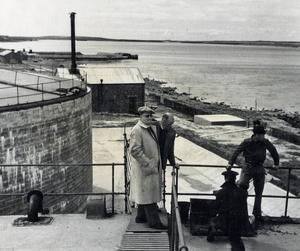 L W Young during the construction of...

Young married Gladys Evangeline Matthews and they had three sons, William Hamilton (born in Bombay on 23 November 1920 and the only one with close links to the Islands), Timothy (b1922) and Christopher (b1926).