horticulturalist, was born in Stanley on 20 January 1914, the fourth of eight children born to John David Evans and Matilda Letitia, née Betts.

Evans began his education in Stanley but, on the death of his father in 1927, had to leave school to work at age 14. His mother found him a job as cabin boy on the government vessel Afterglow. His first months at sea he said 'were the worst time of my life'. However a change of master and cook of the vessel brought happier days and increased his love of the sea. 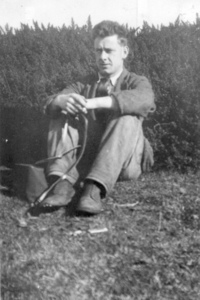 After six months at sea Afterglow was laid up and his mother found him a gardening, three year un-indentured, apprenticeship at Government House gardens under the head gardener, Cecil Parkinson with an unwritten promise from Governor HODSON of further training in Britain. After his apprenticeship, no mention was made of the promised training as Hodson had been replaced by Governor O'GRADY. Parkinson departed leaving his position vacant but, although now fully qualified, Evans was not to fill the vacancy.

With a new governor, Sir Herbert HENNIKER HEATON, a petition was submitted by the Falkland Islands Reform League that Evans be appointed acting head gardener. The governor, guided by his own assessment, appointed Evans acting head gardener. He also renewed the promise of training once arrangements could be made, and in 1937 Evans and family duly departed for Britain. 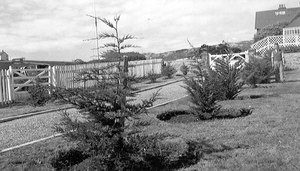 487 Howell Evans planting trees on the...

Evans completed one year training at the Royal Botanic Gardens, Kew and a further year at the West of Scotland Agricultural College Horticultural Department, Auchincruive, Scotland. He returned to Government House gardens as head gardener in 1939 on a salary of two hundred pounds per annum. Thus began a very successful career in the Falklands, and later horticultural research in West and East Africa.

Evans married Mabel Eliza (May) Middleton, a housemaid at Government House, on 4 December 1932 in Stanley. They had four children: Denton John, (b1933), Howell Alistair (b1937), Marcia Joan (b1938) and Darrell (b1946). He had also been an active member of the Boys Brigade and, in earlier years, as a Rover Sea Scout (1936) and had been taught, examined and certificated for his competency in sailing. 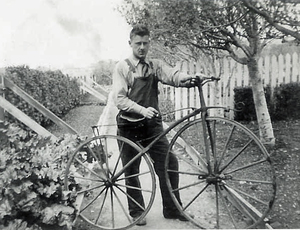 Howell Evans at Government House in...

One of Evans's many projects was the growing of trees in the Falklands. For his initial experiment, he planted two plantations of trees behind the government gardens; these were eventually to act as a shelter break against the westerly winds - subsequently they became known in Stanley as 'The Forest'.

During World War II he was withdrawn from active military service with the Falkland Islands Defence Force, in which he served for a period of 15 years as a corporal, and called upon, with his staff, to produce massive quantities of vegetables for the British forces stationed in Stanley and for visiting naval and merchant vessels. In July 1946, Dr GIBBS, in charge of the Agricultural Department, left the Islands. Evans was then appointed officer-in-charge of the Agriculture Department, in addition to supervising Government House gardens on a salary of £437 pa. 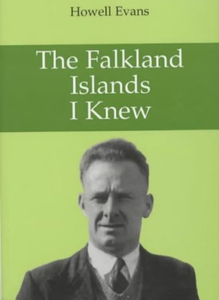 Shortly after the end of World War II Evans applied to the Colonial Office in London for an overseas posting as he wanted a better education for his children and also because the colony did not offer further advancement in his profession. In March 1947 he departed, on his own, aboard the Northumberland, his family remaining in Stanley.

Evans took up  a horticultural position at the Cocoa Research Institute at Tafo, Gold Coast, {Ghana}. Toward the end of his contract time he applied successfully for a position as an assistant horticultural officer at the Coffee Research Station, Ruiru, Kenya. He was reunited with his family in the UK before they all sailed out to Kenya, where they happily remained, he in various other horticultural research units (pineapples and citrus), until Kenyan independence in 1963. He had also served in the Kenya Police Reserve, on active duty during the Mau Mau uprising. 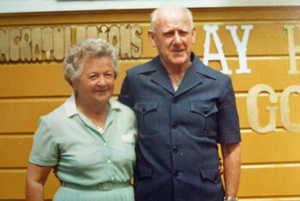 Howell and May Evans celebrating...

With their son Darrell they migrated to New Zealand, where their eldest son and his family lived. Evans had a varied life style in Auckland: he gave up horticulture completely and bought a grocery shop. However he and his wife were too successful and the business became too demanding so he sold it and worked for the Inland Revenue before getting work with local government.

Evans, for the most part, thoroughly enjoyed his life as a seaman and as a Falkland Island and African horticulturalist. He was a short, slight man with a strong will, and a happy disposition although, when antagonised, he had a 'short fuse'. In his grim determination to better himself and his family, he was ably supported by his equally determined wife. He was always very conscious of his lack of secondary and tertiary education, but his ability to learn on the job brought him the success and happiness he had worked so hard for and so richly deserved.

In 1999 he completed The Falkland Islands I Knew, an evocative account of his first forty years, which was published by Antony Nelson (Oswestry, England) in 2001.