geologist and mineral prospector, was born 'Glasgow c 1857' according to the records of the University of Glasgow which he attended as a mature student aged about forty. Nothing is known of his early years, but his career as a mineral prospector and mine surveyor is recorded by geological specimens, notebooks and archive papers now held by that University and within the Salvesen archive at the University of Edinburgh. 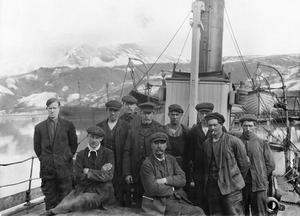 His work began in the Scottish coalfields and the Galloway metalliferous mining field. Building on that experience, he was then involved in several overseas mine assessments and prospecting expeditions seeking metal ores, working in Iran (1891-1893), Newfoundland, (1894) and South Africa (1895-1896 and 1901-1903). Perhaps financially secure after his overseas postings, Ferguson next embarked on higher education, taking classes in geology and mineralogy at the Glasgow and West of Scotland Technical College (now the University of Strathclyde) between 1904 and 1907, and the University of Glasgow between 1905 and 1908. He does not appear to have formally graduated from either institution, but at the University of Glasgow he made professional contacts that were influential in his future activities around the South Atlantic on behalf of the Salvesen whaling company.

The Salvesen company had established bases in the Falkland Islands, at New Island, in 1908, and in South Georgia, at Leith Harbour, in 1909. With a view to additional economic opportunities, David Ferguson was recruited to carry out a mineral survey of South Georgia and arrived at Leith Harbour on 7 January 1912. His journey had been monotonous and uncomfortable on a Norwegian-crewed ship that he considered a 'death trap'. The experience rather set the tone for his subsequent, extremely uncomplimentary opinions of Norwegian whalers. 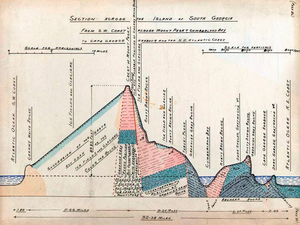 The geological cross-section of South...

During the first months of 1912, Ferguson travelled widely around the coasts of South Georgia, transported by the Salvesen whale-catcher SSMatilda and landing wherever possible to investigate and sample the rocks. It proved an arduous assignment, but he came to the correct conclusion that the Island’s predominantly sedimentary geology held no economic potential. He departed South Georgia in mid-April 1912, and once back in Scotland prepared scientific papers describing the Island’s geology in collaboration with two eminent mentors from the University of Glasgow, Prof J Gregory and Dr G Tyrrell. Their interpretations have not proved durable, but Ferguson’s basic data and specimen collection served usefully to inform all subsequent geological work on the island. A planned collaboration with WS BRUCE, that would have seen an account of South Georgia’s geology included in the scientific reports of the Scottish National Antarctic Expedition (1902-1904), did not come to fruition.

In 1913, Ferguson again sailed south on behalf of the Salvesen Company. From the New Island whaling station, at the western margin of the Falklands archipelago, he planned a prospecting expedition to the South Shetland Islands and neighbouring parts of the Antarctic Peninsula. He arrived in Stanley on 15 October 1913 and left in mid-April 1914; his Antarctic trip lasted from 1 December 1913 to 7 February 1914. 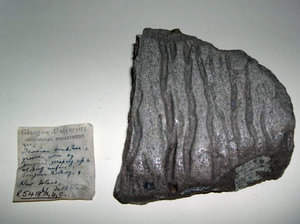 Sample of rock collected by Ferguson...

Ferguson travelled to the South Shetland Islands on the Salvesen whale catcher SS Hanka, and was able to examine localities there and on the Danco Coast of Graham Land. Valuable geological information was gathered, but the experience reinforced his low opinion of Norwegian whalers. Nevertheless, his observations and specimen collections were scientifically pioneering and commendably comprehensive given the circumstances. He published an account of the geology which remains a useful contribution.

Ferguson’s Falkland Islands assessments were less successful, although he correctly dismissed reports of oil shale and base metal ores, from various Falklands beaches, as the result of shipwreck and lost cargoes. His low opinion of Norwegians may have extended to Scandinavians in general, as he rashly disputed the conclusions of two Swedish geologists, JG ANDERSSON and T HALLE, who had worked in the Falkland Islands a few years earlier. Andersson’s and Halle’s interpretations were fundamentally correct, and it may have been the advice, to that effect, of Ferguson’s better-informed mentors at the University of Glasgow, that dissuaded him from writing any formal account of his Falklands work.

Apart from the geological observations, Ferguson’s Falklands notebooks contain much social commentary, and reveal him as a rather brusque and perhaps arrogant character, very conscious of ‘British superiority’ in all things. However, he was generally sympathetic, at times even admiring, towards the Falkland Islanders, if highly critical of absentee landowners and a landholding regime that thwarted ambition.

After returning home from the Falkland Islands, Ferguson continued with coalfield work in Scotland and northern England then, in the 1920s, resumed overseas prospecting in Canada and possibly India. He does not appear to have married and died in Glasgow on 8 March 1936. He is commemorated in Ferguson Peak at the south-east end of South Georgia: 54°47´S. 35°50´W., 560 m.

Peter Stone: The mineral prospecting expeditions to the South Atlantic islands and Antarctic Peninsula region made by the Scottish geologist David Ferguson, 1912–1914; Scottish Journal of Geology (2013) 49 (1): 59-77