Swedish botanist and geologist, was born on 25 September 1884 in Nykyrka, close to Mullsjö in Västergötland, Sweden. His father, Carl Otto Gustafson was a shopkeeper, and his mother was Eva Cornelia née Larsson. His elementary schooling was followed by secondary grammar school in Jönköping where he developed a strong interest in science and in particular botany. In 1903 he began studies at Uppsala University graduating in 1906 with a Bachelor of Science in geology. 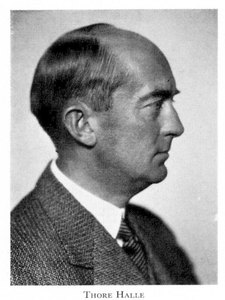 In 1911 he received the title of Doctor of Philosophy from the University of Uppsala for his work on the geology of the Falkland Islands and in the same year was appointed docent at Stockholm University.

Halle began a long association with the Swedish Museum on Natural History in 1907 under the tutelage of the renowned palaeobotanist Professor AG Nathorst. In 1914 he was employed at the museum, and on the 22 February 1918 he succeeded Nathorst as head of the Department of Palaeobotany. Between 1921 and 1947 Halle was also director of the Swedish Museum of Natural History before he retired in 1950. 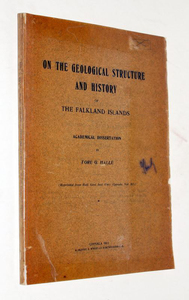 Halle was active in other fields and served as vice-secretary to the Swedish Academy of Sciences. In 1930 he received an honorary Doctorate from the University of Cambridge for his contributions to Palaeobotany. In particular Halle is best know for his seminal works describing the first Mesozoic flora from the Antarctic, floras from Patagonia and his most famous work of 1927 on the Permian floras of China.

Halle was one of the worlds leading palaeobotanists, who was respected as an excellent morphologist and for the development of new techniques to study fossil material. Halle married Helga Elvira Westman (b1898) on 24 November 1921; they had at least one son. On 12 May 1964 Halle passed away at Saltsjöbaden, Nacka, (Sweden). 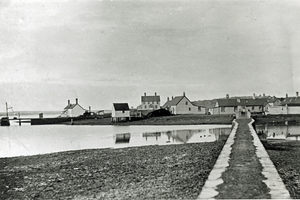 Halle's association with the Falklands arose through investigations made on the Swedish South Polar Expedition (1901-1903). The discoveries by Prof JG ANDERSSON raised Halle's interest in the geological history of this region and on 26 October 1907 Halle arrived in the Falklands at Port Stanley as part of CJF SKOTTSBERG's Swedish Magellanic Expedition. He spent several months in the Falkland Islands and departed on 12 February 1908. During this time the expedition travelled widely in the Falkland Islands through the generous offer of free passage on the Falkland Island Company ships. The expedition visited Saunders Island, Roy Cove, Fox Bay, Speedwell Island, Darwin Harbour, Port Howard, Hill Cove, Port Philomel, Halfway Cove, and many other places. These were often used as bases for trips into the hinterland.

Halle mentioned that he was based at Mr Allan's home in Darwin Harbour for all his trips across Lafonia.

The geological investigations and collections made as part of the Skottsberg Expedition formed the basis for Halle's PhD thesis which was published under the title On the Geological Structure and History of the Falkland Islands in 1911. Some of the main findings were the extent of the Permo-Carboniferous glacial beds, extensive Glossopteris fossils from Lafonia, and the discovery of in situ forest horizons on West Point Island. This comprehensive work with its associated geological map formed the main body of knowledge about the geology of the Islands for the next 62 years until The Geology of the Falkland Islands was published as a British Antarctic Survey Scientific report (No 76) in 1972. 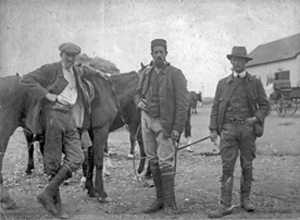 Halle and Carl Skottsberg in...

Thore Halle; On the Geological Structure and History of the Falkland Islands; 1911. Bulletin of the Geological Institution of University of Uppsala 11: 115-229.