Swedish geologist, polar explorer, and archaeologist, was born in Knista, in the province of Närke, Sweden, on 3 July 1874, the only child of Johan and Hedvig Andersson, née Lekberg, (farmers).

The abundance of fossils in Närke stimulated an early interest in palaeontology, and in 1892 he went to Uppsala University to study geology, palaeontology, chemistry and zoology. He gained his PhD in 1901 for his work on the geology of Bear Island in the Arctic Ocean, and was appointed assistant professor in geology at Uppsala. 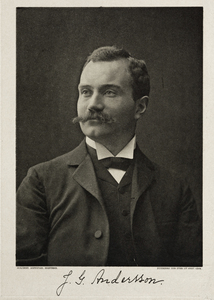 8 Kina Gunnar in his late twenties.

His studies prepared him well for the Swedish South Polar Expedition of 1901-1903 led by Otto NORDENSKJÖLD, a colleague at Uppsala. Andersson was deputy leader of the Expedition and in charge of the 1902 leg which undertook research in the Falklands, Tierra del Fuego, South Georgia and the Antarctic Peninsula.

Andersson arrived in the Falklands on 21 February 1902 on board the Orellana from Liverpool, and had to wait for a few weeks spent exploring the surroundings of Stanley, Port Stephens and Fox Bay, where he stayed with Mary Ann and George Hurst, finding fossils similar to those discovered by DARWIN. On 11 April he departed in the Antarctic for South Georgia where he remained until 15 June pursuing topographical, geological and botanical surveys, with Samuel August Duse (cartographer) and Carl SKOTTSBERG (botanist). Andersson named two large glaciers in the western arm of Cumberland Bay as the Lyell and Geikie glaciers after Scottish geologists Charles Lyell and Archibald Geikie. 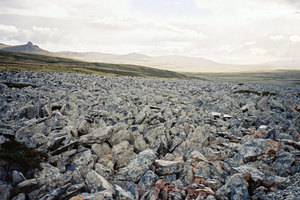 On 4 July the Antarctic returned to the Falklands, remaining through the winter. Andersson and Skottsberg went to Port Louis for almost a month studying stone runs, in particular Prince's Street. His intention was to produce 'a map of the stone-river' but progress was slow and the map was unfinished when he returned to Stanley. Nevertheless the map was published as part of his 1907 paper written for his friend Thor HALLE, who also undertook geological work in the Falklands.

Andersson's observations led him to introduce the term solifluction (literally: soil flow) for the process by which hillside detritus (rock particles, soil and sediment) moves from higher to lower ground. Andersson recognised that stone runs were not the result of present-day solifluction, but associated with an earlier period of more severe climate characterised by heavy snowfalls in winter and summer snowmelt capable of moving large boulders. Although stone runs have continued to attract interest since Andersson's explanation and some alternative mechanisms have been introduced into the debate, solifluction is generally accepted as the principal means by which the boulders reached their present locations. 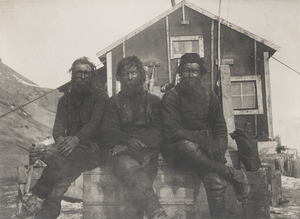 After departing Stanley on 6 September for Tierra del Fuego, the Antarctic stopped for two days at Port Albemarle thus enabling Andersson to visit and sample the igneous and metamorphic rocks in the cliffs at Cape Meredith. Unfortunately the samples were lost when the Antarctic went down in the Weddell Sea in February 1903.

Following almost two months in Tierra del Fuego the Antarctic returned south to meet Nordenskjöld's winter party, but this part of the expedition did not go according to plan because of extensive sea ice. Andersson, Duse and Grunden (seaman) attempted to reach Snow Hill Island by an overland route but were forced to winter in a crude stone hut which they built at Hope Bay. The following spring they succeeded in reaching Nordenskjöld, and were joined by CA LARSEN and some of the crew of the Antarctic, which had been trapped and crushed by the ice. The expedition was eventually rescued by the Argentine naval vessel Uruguay in November 1903. 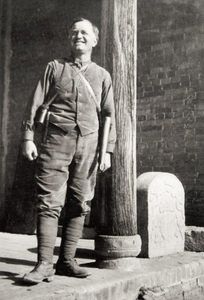 On returning to Sweden, Andersson resumed his career at Uppsala University and in 1906 became Director of the Swedish Geological Survey.

Using the artefacts he collected, the Swedish parliament established a museum of Far Eastern Antiquities in Stockholm in 1926. Andersson was awarded a professorial chair in Far Eastern Archaeology and appointed the museum's first director. He retired in 1939. 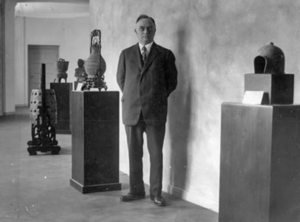 Andersson married Eira Johansson in 1950 when he was 76 and in hospital. His two autobiographies mention three children (two daughters and a son), born between approximately 1900 and 1910, but make no reference to their mother(s) or a previous marriage.

The Museum of Far Eastern Antiquities is generally regarded as Andersson's legacy, but his time in the Falklands, South Georgia and Antarctica produced a wealth of geological information around which many subsequent studies have been constructed, and a tale of endurance now largely forgotten or overshadowed by the exploits of those who came later.

Otto Nordenskjöld and J. Gunnar Andersson ; with a foreword by Vivian Fuchs;  Antarctica; or Two years amongst the ice of the South Pole;  University of Queensland Press; 1977.