naval hydrographer, was born on 5 July 1805 at Ampton Hall, near Euston in Suffolk, the second son of Lord Charles FitzRoy (the second son of the third Duke of Grafton) and Anne, daughter of the first Marquis of Londonderry. His father, after service as an army officer became a country squire, represented a Suffolk constituency in Parliament in a not very distinguished way, and was described as a 'farming, gardening and fox-hunting country gentleman'. The family was well connected politically, and the family tree abounded with army and naval officers, some of great gallantry and distinction. 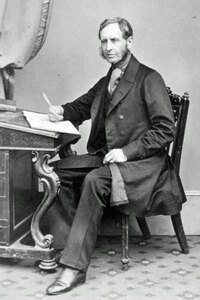 142 Robert Fitzroy seated at a writing...

Before he was thirteen years of age the young FitzRoy was enrolled at the Royal Naval College at Portsmouth; the normal course lasted from two and a half to three years, but he completed it in one year and eight months. The teaching (physics, astronomy, navigation, naval history, geography, naval architecture, French) was intense and he passed out with full marks and a gold medal.

He saw service as volunteer, midshipman, lieutenant and flag lieutenant on the Owen Glendower, Hind, Thetis and Ganges in his 'teens and early twenties. These ships had tasks as varied as discouraging smuggling around the Cornish coast and ferrying ambassadors to their posts. His service in British waters, South America and the Mediterranean trained him well; the ships were involved in the occasional skirmish, but in no spectacular action. An officer who served with FitzRoy described him as 'one of the best practical seamen in the service' and one 'with a fondness for every type of observation useful in navigating a ship'. 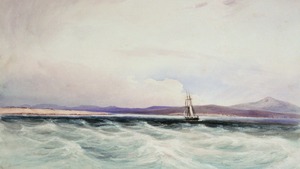 143 Beagle standing in to Berkeley Sound...

Early in 1828, the Adventure (captained by Philip Parker King) and the Beagle (under the command of Pringle Stokes) were undertaking a hydrographic survey of the confusion of islands, inlets and promontories that constitute Tierra del Fuego. Faced with severe weather and serious privations, the strain on Stokes became unbearable, and he committed suicide. Although another officer could have had a better claim on the position, Admiral Sir Robert Otway, in charge of the South American Station, gave Robert FitzRoy command of a ten gun surveying brig, the Beagle, at the young age of twenty three: his confidence was not misplaced.

Many months of further survey followed, FitzRoy completing the tasks assigned to him with flair. However, at one stage a whaleboat was taken by a group of Fuegian natives; FitzRoy took several Fuegians hostage, hoping to exchange them for the boat. The tactic was unsuccessful. None the less, FitzRoy resolved to take the group to London, to have them educated (and 'christianised') and returned. 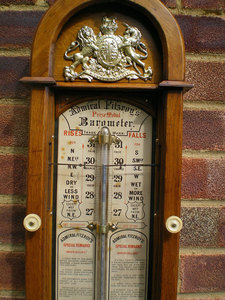 Just after Christmas 1831 therefore, HMS Beagle set off again for the South Atlantic, intent on continuing the survey of the southern tip of South America, and returning the now-educated Fuegians to their homeland in the company of a missionary. The west coast of South America was then to be surveyed, and 'a chain of meridians' around the world was to be established: an accurate method of establishing longitude had only recently been developed, and the precise position of many points was still uncertain. Charles DARWIN was chosen by FitzRoy to act as a companion, and to assist with natural history observations on this second Beagle voyage. Although the young naturalist (Darwin was 23 on going aboard the Beagle, four years junior to FitzRoy) did not undergo any Eureka-like experience during the voyage, the observations he made (particularly on the many remote islands he visited) were later to prove extremely important in the subsequent development of his ideas.

There is every reason to believe that the discussions, and sometimes vigorous arguments, which Darwin and FitzRoy had while sharing cramped quarters aboard ship, were a significant influence on the young naturalist. On the whole they interacted well, despite occasionally strained relations, sometimes visiting geological and other sites together, and FitzRoy allowing the ship's boats to be used to set Darwin down at a location from which he wished to collect specimens or make observations. The history of science would have been very different were it not for the manner in which these two were thrown together for nearly five years. 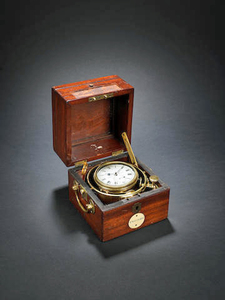 The chronometer used by Fitzroy...

FitzRoy spent several months surveying around Tierra del Fuego in late 1832 and early 1833, during which the Fuegians were returned, but the attempt to establish a mission station was unsuccessful - the missionary was attacked, and his property taken, so that FitzRoy had to remove him, taking him eventually to New Zealand. The Beagle then sailed for Port Louis, Berkeley Sound, East Falkland. No doubt this was partly to repair the ship after serious storms experienced off the southern tip of South America, and to replenish stocks of beef and water, but FitzRoy also completed detailed hydrographic charts of the Falklands. Superb manuscript charts of parts of the Islands countersigned by Captain FitzRoy are held in the Hydrographic Office in Taunton.

The captain of one of His Majesty's ships-of-war frequently had diplomatic, administrative or other official duties to perform in the ports visited, and at a number of locations Robert FitzRoy had to sort out petty squabbles or act in some other official capacity. The visits of the Beagle to Berkeley Sound were typical. On the first visit from 1 March - 6 April 1833, just after Captain ONSLOW had reasserted British control, FitzRoy found a group of French seamen living in tents made from sails; the French whaling ship La Magellan had been 'totally wrecked'. FitzRoy wrote: 'after due enquiry, I promised to carry as many as I could to Monte Video, and to interest myself in procuring passage for the rest'. He went on 'there was no constituted authority on the islands', the Argentinians having recently apparently abandoned them. The settlement had been 'ruined' in 1831 by the USS Lexington; the few gauchos living there used to 'gamble, quarrel and fight with long knives', the crews of French, British and American whalers, armed with clubs and rifles provided 'no lack of elements of discord'. And it was with 'a heavy heart and gloomy forebodings that I looked forward to the months ... without the presence of a man-o-war, or the semblance of any regular authority'. 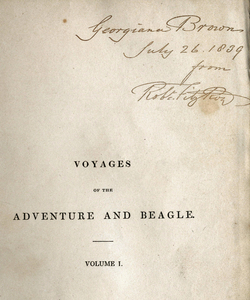 Robert Fitzroy's signature on the...

His forebodings were well grounded; in the year that elapsed between the two Beagle visits, there were enacted, as Darwin put it, 'complicated scenes of cold-blooded murder, robbery, plunder, suffering and infamous conduct'; several murders were committed; several of the desperados responsible were taken on board the Beagle, some of them in irons. Dealing with these problems amongst others, and completing the hydrographic survey, and collecting information on the islands took up most of Captain FitzRoy's time during his second visit from 9 March to 7 April 1834.

The voyage of the Beagle continued until late 1836, and on his return FitzRoy married Mary O'Brien, by whom he had several children. He spent the next three years completing the charts and reports for the Admiralty, writing his Narrative of the Surveying Voyages of the Beagle, and giving evidence to a House of Lords Committee. On 30 June 1837, Fitzroy wrote to Admiral Beaufort, hydrographer to the navy, giving meteorological and other reasons for establishing the principal settlement in the Islands adjacent to Port William, adding: 'without easy and frequent intercourse with ships the Falklands are not worth notice. With that, they may become invaluable.' 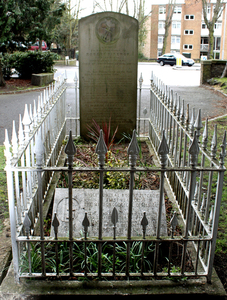 Robert Fitzroy's grave in front of...

He had a brief period in Parliament, followed by a couple of years (1843-1845) as governor of New Zealand. In part because of his autocratic manner his tenure of this position was not a success. Back in Britain he was posted to HMS Arrogant, the first screw-driven ship of the Royal Navy. In 1850, partly on the grounds of ill health, he resigned from the full-time service of the navy.

Always interested in meteorology (he invented a type of barometer), he was appointed the first head of the newly established Meteorological Office. He was promoted to rear-admiral, and developed a system of synoptic charts, weather forecasts and storm warnings. He was a great success in some of these activities, but he had his own priorities, which were not always those of his political masters. He tended to make enemies; sometimes (as with weather forecasts today) his forecasts were wrong, and he was bitterly criticised: he took this hard. Always a traditionalist in many matters, and an evangelical, estrangement with Darwin followed the publication of On the Origin of Species in 1859 and the 'Great Debate' at the British Association meeting in Oxford in 1860. Periods of ill health and depression became longer and more intense and eventually destroyed him: on 30 April 1865 he took his own life, cutting his throat with a razor. There is a bitter irony in this: it was the suicide of Pringle Stokes which had given him the command of the Beagle; one of his naval forbears had also committed suicide. 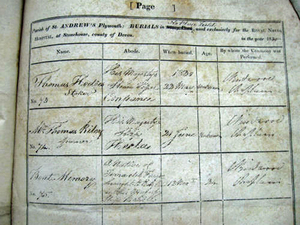 The third entry in this burial...

In some ways a caricature of a naval officer of his day, Robert FitzRoy had defects in his character but was a brilliant man; it is for his hydrographic charts and his contribution to meteorology that he is remembered. The precise extent of his influence on Darwin can never be known, but it was considerable.

In the Falklands he remains important for his charts, and for his efforts to bring order at a troubled time. In the Islands his name is commemorated in the settlement of Fitzroy and in Fitzroy Road in Stanley; there are various other Fitzroys in South America and Australia, as well as a meteorological sea-area in the Atlantic.

Robert Fitzroy; "Narrative of the surveying voyages of His Majesty's Ships Adventure and Beagle between the years 1826 and 1836, describing their examination of the southern shores of South America, and the Beagle's circumnavigation of the globe. Proceedings of the second expedition, 1831–36, under the command of Captain Robert Fitz-Roy, R.N."; 1839

Peter Nicolls; Evolution's Captain: The Dark Fate of the Man Who Sailed Charles Darwin Around the World; Harper Collins; 2003

Univ of Western Australia; author of Darwin’s Desolate Islands and Darwin’s Other Islands.