Yahgan Indian, was born about 1818 and bought for a pearl button by Captain Robert FITZROY in 1830 and given his nickname. With three other Indians, he was taken to England on board HMS Beagle. There they were educated and, before they left, were presented to King William IV and Queen Adelaide. Button stood  out as intelligent and quick to learn. At the end of December 1831, the Beagle set sail again for Tierra del Fuego, with the Indians on board. After an interrupted voyage of 13 months, they were settled at Wulaia, Navarin Island.

On the first visit by the Allen Gardiner to Tierra del Fuego in November 1855, the missionaries encountered Button, his wife and children. They found that Button still remembered much of the English he had learnt. Finding the Indians' attitudes too threatening, the missionaries departed without taking the Button family with them. In June 1858, DESPARD, by now in charge of the Mission, visited Wulaia. He met Button and his wife and persuaded them to come to Keppel Island with the three youngest children. Among them was their son Three Boys, who later was to go to England with STIRLING. With Button's cooperation, the missionaries began to build up a dictionary of Yahgan words and their meanings. Five months later the Indians were returned to Wulaia.

When in November 1859 the Allen Gardiner returned another group of nine Indians to Wulaia, without warning other Indians set upon the missionaries and the crew of the mission vessel. Eight were killed and only the cook escaped. At the subsequent enquiry in Stanley, Button gave his deposition in English. It decided that Button did not participate in the massacre of the missionaries, but did share some of the spoils. He had done what he could to alleviate the situation, and had rescued the ship's boats from drifting away. OKOKKO and Alfred Cole both attested to his innocence of the charge of murder. Later Button was influential in encouraging some of his relatives to spend time at Keppel. Contact was again made with Button in 1863 on Stirling's first trip with BRIDGES and Okokko to Tierra del Fuego. Three Boys was among the party who returned to Keppel on the Allen Gardiner. At the beginning of March 1864, Button died, with many other Indians, of an unknown disease. 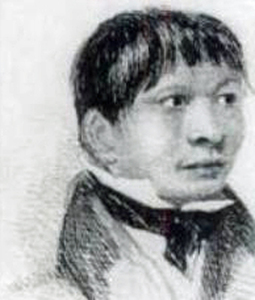 Button made an impact on the Europeans who met him. Despard in 1868 described him as about 40 years, 5'1" or 2" tall, broad and straight. His hands, feet, and teeth were small; he had a pleasing look. He was sensitive to slights, affectionate, courteous, cleanly, orderly, good memory, slow to comprehend, taciturn, and avoided hard work.

E L Bridges; The Uttermost Part of the Earth; first published in 1948 and reprinted by Overlook Press 2008

Anne Chapman; European encounters with the Yamana people of Cape Horn, before and after Darwin; Cambridge University Press; 2010