Yahgan Indian, was persuaded by GP DESPARD to come to Keppel Island when he was 15. He arrived with several others in January 1859. During a stay of 10 months, he learnt practical skills as well as Christian fundamentals.

On their return to Wulaia, Navarin Island, at the beginning of November, Okokko witnessed, but did not take part in, the massacre of the mission party of nine men with the exception of Alfred Coles, the cook. Okokko and his companion subsequently placed the bodies together and protected them with rocks. Afterwards he pleaded to be allowed to return to Keppel, which he did with his wife, Camilenna.

In 1863, when the STIRLING family arrived in Keppel to take charge of the mission work, they found there, in addition to the BARTLETT family and Thomas BRIDGES, Okokko and his wife and two children. By this time Okokko's grasp of English and the Christian faith had greatly improved and in return he had helped Bridges to learn Yahgan and understand his people's customs. As a result, Stirling was able to set off for Tierra del Fuego to visit the Indians for the first time since the massacre, taking with him Okokko and Bridges to act as interpreters. Okokko's task was to explain to his fellow Indians the purpose of the Keppel Mission. Such was his success that 11 of the hearers decided to go there with him on board the Allen Gardiner. In early 1864, it was decided that Okokko and family should go back to Wulaia to live, properly established in their own house and garden following the pattern of life they had learned on Keppel. It was on this visit that Okokko identified to Stirling the place where the 1859 massacre had taken place, thus allowing six of the dead to be given a Christian burial. 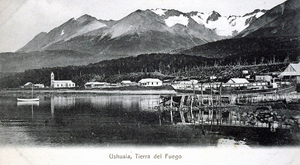 On a visit to Okokko a year later, the missionaries found that, having established himself and family well, jealous tribesmen had destroyed his house and garden. In view of Stirling's impending visit to England, it was decided to take him and his family back to Keppel. After Stirling's return to Keppel in April 1867, he decided to set up on Navarin Island a small settlement of Indians who had been at Keppel. Okokko was to take charge. Stirling planned to establish himself permanently on the opposite shore of the Beagle Channel on what is now the site of Ushuaia. Stirling's stay in 1869 among the Indians lasted only seven months until he was called to London to be consecrated bishop. In 1872, Okokko and Camilenna and their five children were the first of 36 Indians to be baptised by Thomas BRIDGES. Little is recorded about Okokko afterwards.

He died c1906 at Ushuaia, one of the last of the surviving Yahgan Indians.

Okokko and his wife were key figures in introducing the missionaries to the Yahgan language and culture. They convinced their countrymen of the benefits of Christianity and of embracing European values.