French engineer and cartographer, was supposedly from a Scots family named Frazer, which had fled to France. He was born in Chambery in Savoy in the French Alps.

He trained as a military engineer and sailed on the St Joseph, 350 tons, for over two years, from January 1712 to August 1714, visiting the South Seas. Besides studying Spanish fortifications in South America, Frézier was well placed to assess current maps of the area and to make corrections. 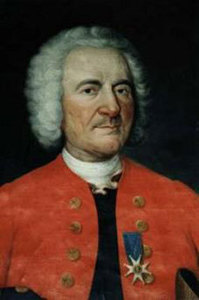 He drew up new charts which took account of the discoveries of recent voyages by frigates from St Malo and published a detailed illustrated account in 1716 on his return to Paris.

Frézier's map of southern Tierra del Fuego and the Falklands was the best of the area so far made. It showed the east coast of East Falkland in some detail, although it did not distinguish Falkland Sound or attempt to chart the western coasts.

Later French explorers and colonists used Frézier's plans and Admiral Lord ANSON took an English translation of his book with him. Frézier named the Islands on his map, the 'New Islands' and more fully in the map's title: 'New Islands discovered by the vessels from St Malo, of which the western part is still unknown'. 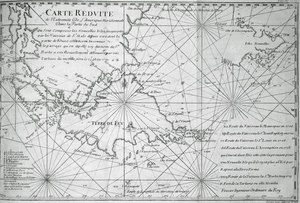 The French king's geographer, Guillaume Delisle, on his map of 1720, published in 1724, compressed this to 'Isles Malouines'. The name stuck and became 'Islas Maluinas' and then 'Malvinas', in Spanish and, briefly, 'the Maloons' in English.

Frézier's expedition became celebrated for bringing back samples of the Chilean strawberry, fragaria chiloensis, which was crossed with the smaller European variety to produce the present fruit.