master mariner, whaler and sealing skipper became a legend at South Georgia, renowned for his seamanship and intimate knowledge of the Island’s maritime geography acquired in the 35 years that he worked out of Grytviken for the Buenos Aires based Compañia Argentina de Pesca. 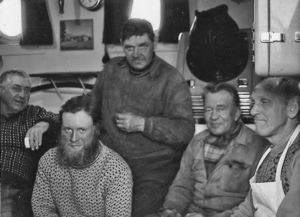 Sealing crew on Petrel  in...

Captain Ole Hauge Petersen was born at Kværne Søndre in the parish of Stokke near Tønsberg, Norway on 10October 1898, the son of able seaman Oluf Kristian Petersen (b 1877) and Hanna Andrea Petersen née Simensdatter (b 1875).

Hauge went to sea at an early age and obtained his ship’s mate certificate. He was first recorded skipper of the sealing vessel Carl, constructed in 1884, the most elderly of three vessels employed by the company. These ships took a strict quota of southern elephant seals (Mirounga leonina) from four ‘divisions’ or lengths of the coast defined by the Falkland Islands Government. (n.b.The division of the coastline for the purposes of sustainable sealing was first proposed by James Innes WILSON).  Under this licensing regime, which the Pesca company was permitted to monopolize, the sealers butchered the seals on the beaches, and having flensed the oil-bearing blubber, stored it in the hold of the ship. When the ship’s hold was full, the vessel would make its way back to the whaling station at Grytviken, where the blubber would be unloaded and fed into the station boilers to produce a valuable oil, equal to the best whale oil. The company claimed that sealing had enabled it to continue in business when returns in whaling declined, so that sealing provided some 14 per cent of the production and value of a season’s catch. 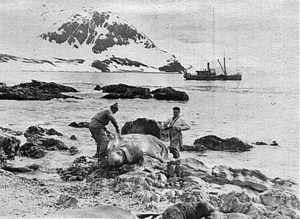 Sealing with ship Carl in the Bay of...

On 8 December 1936 Hauge became engaged to Solveig Melsom (b 13 June 1911) from Notodden in Telemark county, but the marriage in that town did not take place until 6 August 1938. In the meantime, Hauge had received in July 1937 official consent to discard the surname Petersen and replace it with his middle name Hauge. The couple made their home in Thaulows gate, Sandefjord, and his wife trained as a qualified chiropodist, opening her own business in the town.

Hauge found himself en route to Grytviken when war broke out in September 1939. It appears from the records that following the occupation of Norway in 1940 he remained at Grytviken for the remainder of the war, where the company was supplying valuable oil for the allied war effort in Europe. Hauge was assigned to the whale catcher Narval under gunner Albert M Ingebretsen.

After the war, Hauge was appointed master of the sealing vessel Albatros, which had been constructed as a catcher in 1921. It appears that sealing became Hauge’s chosen vocation as he continued in this role until both whaling and sealing ceased in 1965. In this time, he gained an intimate knowledge of the marine environment of South Georgia and assisted many scientific and cultural expeditions by landing men ashore (and collecting them thereafter) in some of the most distant and remote bays and islands. Of particular note, was the support he lent to the South Georgia Survey team, led by Duncan CARSE, which was intent on producing the first accurate topographical map of the island and his assistance to the British South Georgia Expedition, led by George Sutton in 1954/55. He also transported the biologists Nigel BONNER and Bernard Stonehouse to the Bay of Isles in 1953 where they set up camp and undertook investigations of birds, penguins and seals for a complete year. This was the beginning of Bonner’s long association with South Georgia as a government naturalist, sealing inspector and museum director.

On Christmas Day, 1955, Hauge was one of ten Norwegian and five men from other nationalities who in the Pesca company’s tradition, were presented with a gold watch in commemoration of 25 years’ loyal service. The Norwegian newspaper Sandefjords Blad reported that the ceremony took place in the Grytviken Kino (Cinema) so that the whole workforce, both the station and whale catcher crews, could be accommodated. The Welfare Committee had provided a variety of entertainment in addition to the film show. But the main part of evening’s event was the awarding of the gold watches. The station manager Kenelm PIERCE-BUTLER was the master of ceremonies. He made an emotional speech and then each one of the fifteen recipients came to the stage to receive their watch to rapturous applause. In the same year, Hauge was granted permission by Sandefjord Commune to construct a detached house on a piece of land, whose street name was designated Sydgeorgia gate (South Georgia street).

Hauge continued to work on the sealing vessel Albatros until 1959, after which he transferred to the Petrel. In 1960 he also took charge of one of the modern diesel driven ‘R’ catchers at the beginning and end of the whaling season navigating her from Norway to South Georgia and return. When whaling at Grytviken ceased at the end of the 1961/62 season, sealing also came to a halt. But it was resurrected a year later when a Japanese consortium took a lease on the station. Hauge, with several other Norwegians, returned on the Petrel to instruct the Japanese in the practical methods of sealing. Despite differences in language and culture, the outcome was remarkably successful. But the Japanese found whaling and sealing at South Georgia unremunerative, and in December 1964 they departed the island for good. Hauge and his compatriots were anticipating a return, but it was not to be and at 66 years of age he was forced into retirement.

Ole Hauge died in Sandefjord on 9 July 1978. He was survived by his wife, a daughter, son-in-law and two (later three) grandchildren. Hauge was one of many individuals who worked for most of their lives at South Georgia and in the course of time became legends in their own right. His name is remembered in Hauge Reef, between Annenkov Island and Cape Darnley and Hauge Strait, between Hauge Reef and Cape Darnley, located in the treacherous waters off the western coast of South Georgia, where many a ship has come to a grisly end.

Hauge Strait (Coordinates: 54°28′S 36°53′W) is a strait 3 nautical miles (6 km) wide between Cape Darnley and the northeast end of Hauge Reef, off the south coast of South Georgia. It was surveyed by the South Georgia Survey in the period 1951–57

Hauge Reef is a chain of islands and rocks extending in an east-northeast direction from the eastern extremity of Annenkov Island to a point about 3 nautical miles (6 km) west-southwest of Cape Darnley, South Georgia. It was first charted in 1819 by a Russian expedition under Fabian Gottlieb von Bellingshausen. The reef was surveyed by the South Georgia Survey (SGS), 1951–52