sapper sergeant, was christened in Rochester, Kent on 27 March 1814, the son of William Hearnden, gardener, and his wife Sarah. A bricklayer by trade, he entered the Royal Sappers & Miners in 1836 and was commended for his talent and energy in the tuition of officer cadets at Sandhurst and Woolwich. He took part in an expedition to define the borders between Canada and the US state of Maine. As sergeant he was the senior sapper in the party of twelve which accompanied Lt Richard MOODY RE when he sailed to the Falkland Islands on the brig Hebe, arriving on 15 January 1842. 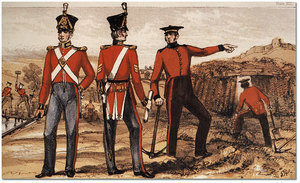 During their six years on the Falklands the sapper detachment was kept constantly busy preparing housing for the governor and his staff, building jetties, preparing roads, digging drainage and surveying. Moody relied on Hearnden in a wide range of tasks. In September 1842 he rode out to Second Corral on Port Salvador and produced an excellent report with plans of the corral. In 1843 the secretary of state decided to move the seat of government from Port Louis to Port William (Stanley) and on 18 August Hearnden read a proclamation to this effect to the colonists at Port Louis. The detachment marched overland to Port William and a letter from Hearnden to Moody, dated 29 December from the new site reports progress in assembling houses and difficulties in unloading casks of lime. In April 1845 a crisis shook the tiny society of Stanley: four of the sappers were imprisoned prior to being shipped home. Hearnden wrote to Moody: 'I consider the whole Colony to be in a bad state...I know a great deal of what goes on and am often very anxious. At times I have made up my mind to the probability of being assassinated'. In the event the recalcitrant sappers were safely embarked on HMS Philomel, and in his despatch to the Colonial Office Moody commended Hearnden, whom he said deserved the highest praise. The remainder of his term in the Islands was spent in constructing the basics for the new capital always under harsh conditions, but with the compensation of an allowance of 4s 6d a day. Hearnden was accompanied by his brother Thomas Hearnden, a butcher who was employed as gaoler in 1848. Robert Hearnden returned home with four members of the original party and Governor Moody in July 1848.

A word on his horse: Blanco was brought from South America, showed signs of breeding and was perfectly white. Though Hearnden had paid over the odds, he was very satisfied with Blanco's usefulness and robustness. On 7 January 1847 Blanco won the Governor's Cup - worth £50, a very considerable sum. Made of silver by Hunt and Roskill, the cup stood 18 inches high and the Sergeant was represented on one side mounted with sword, sabretache and gauntlets.

On his return to England, Hearnden purchased his discharge for £6 on 28 February 1849. He married Sarah Ann Williams on 11 February 1849 in St Botolph's Church in the City of London. With his savings of nearly £1,000 he emigrated to America, where - reported the historian of the Sappers in 1857, 'from his enterprising spirit and commercial tact, he is realising a fortune'. One Robert Hearndon (1815-1867) is buried in Maple River Cemetery, Minnesota, USA, as is his wife Sarah (1830-1911).

He is remembered by Hearnden Water near Stanley and Hearnden Hill near Port Louis.