Norwegian whaling manager, was born at Nedre Råel (in Slagen outside Tønsberg), the son of a blacksmith, Henrik Henriksen, who set up a workshop there in 1856 and specialised in harpoons and machinery for the developing Norwegian whaling industry. The company, H Henriksen Mek Verksted, was later moved into Tønsberg.

The younger Henriksen was recruited by Christian Salvesen & Co as an engineer in 1902 to set up their operations in Iceland, the Faroes and Shetland. In 1908 he built their whaling station at New Island in the Falklands. In 1909 Henriksen set up the Leith Harbour station in South Georgia. Henricken's family company, H Henriksen Mek Verksted provided the plans and much of the machinery for Leith Harbour

Henriksen was station manager at Leith from 1909 to 1918, steering its operation through the troubled and uncertain times of World War I with inadequate and sometimes mutinous crews. He must have been a remarkable man. It requires no mean ability to set up and work a station with all its processing machinery, tanks, boilers and living quarters on a bare beach at the end of the world. H Henriksen Mek Verksted continued to supply the whaling companies with harpoons and grenades and is still a prosperous engineering company in Tønsberg, led by descendants of the founder. 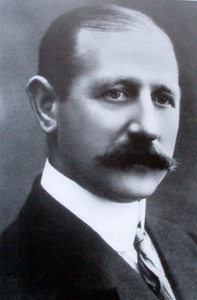 Editorial comment:  (1) From the history of H Henriksens' company history:  'People from around Tønsberg had found highly profitable whaling areas – on the other side of the globe. There is room for great expansion in the years to come. The new boss of the workshop, Karl Ludvig Henriksen, now delivers complete whaling shore stations. And it is not long before H. Henriksens can boast that their products are in use all over the world! While many of the most important shore stations are built up by Henrik, the youngest brother, Harald, specialises in building whale catchers at the local shipyard, Kaldnes .Karl Ludvig and his brothers constitute a mighty alliance in the modern whaling industry.'

(2) From 'A whaling enterprise'  (page 18)  by Sir Gerald Elliot:  'The man who led the whaling enterprise in the Antarctic was Henrik Henriksen, an engineer from Tonsberg, who had already supervised Salvesen's operations in the north. ... Henriksen was clearly outstanding. He belonged to a family of blacksmiths which had designed harpoons and guns for Svend Foyn ... Henriksen was manager of the [Leith] station from the start until his retirement ... The firm of Henrikens Mekanisk Verksted still flourishes, and has among its mementoes a pair of beautiful duelling pistols, by Purdey of London, in a handsome oak box, presented by the Salvesen partners to Henrik Henriksen on his retirement. 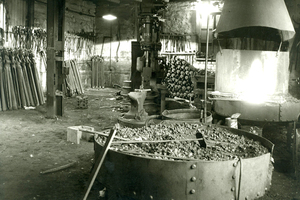 Manufacturing whaling harpoons at the...