colonist in Patagonia, was born at Penaer, Llanfair-talhaern, Denbighshire, the seventh son of Charles Jones and his wife Jane. The family moved regularly, influenced by Charles Jones's role as one of the preachers at the presbytery and thereby involved in preaching and instructing chapel members and conducting prayer meetings. 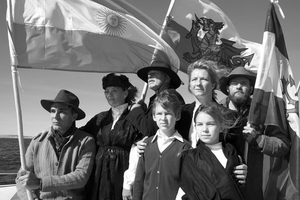 Modern day re-enactment of  the...

Jones left school at 14 and was employed as a clerk and compositor with the local printers, but left in 1863 for Denbigh where he continued in printing. He had a lively and enquiring mind, spending his spare time in bookshops but never neglecting worship by regularly attending chapel meetings. The constraints of life in Wales at the time were such that emigration was rife and inevitably Jones announced to the dismay of his parents that he was to join a company of settlers to Chubut in Patagonia. The settlement followed protracted discussions between Welsh representatives and the Argentine government which at one time involved the British chargé d' affaires in Buenos Aires, when it was suggested that the Argentine Congress would approve the settlement if the British Government would cede the Falkland Islands to Argentina. The chargé responded that it would be wrong for the Argentine Congress to consider that there was the slightest hope of this happening. The settlement proceeded under the auspices of the British Land and Emigration Commissioners who approved of the settlement at New Bay. Jones sailed with 152 others on 25 May 1865 and immediately started compiling a diary which is the only detailed record of the journey.

Jones was an excellent correspondent, unfailing in his letter-writing to relatives at home and from which we are able to piece together his subsequent movements. The settlers arrived at a time too late for sowing and the trials and tribulations they suffered in the first six months or so are outlined in a long letter from Jones. They only survived in fact because of aid provided by the Argentine government in the form of food and a boat. Some of the settlers were aggrieved and when a sealing boat of the Falkland Island Company put in to New Bay {Golfo Nuevo} in March 1866, took the opportunity to prepare and sign a letter to the governor of the Falkland Islands, outlining their grievances. This was carried by Jones and a fellow settler David John on the Fairy which arrived at Stanley on 9 May 1866. Jones clearly intended to return to the Welsh settlement as he left possessions there and did not sign the letter. 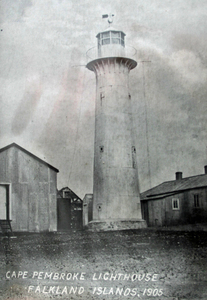 Governor MACKENZIE responded promptly and vigorously, taking depositions from Jones and John and the master of the Fairy which resulted in the dispatch of a naval vessel HMS Triton to the Welsh settlement. The subsequent enquiry established that the discontent arose from a minority and that the Argentine government was blameless. The report was circulated to both Houses of Parliament. The settlement is of course still thriving.

Jones took up employment as a lighthouse keeper at Cape Pembroke and his diary, which is owned by the FIC, is on permanent loan to the FIG Archives. It represents an excellent record of daily life in the colony in the nineteenth century and was published in the 1998 Falkland Islands Journal. He was a deeply religious man of some sensitivity and would probably have returned to Chubut, but for becoming frustrated when he received no word that a return would be wise. He therefore decided to return to Wales, working his passage as a steward and arriving at Liverpool on 3 May 1868. He settled in Holywell, Flintshire, and worked for the post office until his retirement in 1904. He never married and spent his leisure time in the service of the Presbyterian Church, caring particularly for children and the less fortunate. For one who spent so little time in Patagonia and the Falkland Islands, he made a significant impact on their history. A landmark outside Chubut is named Twr Joseph (Joseph's Tower) in his memory.