printer, was born in 47 Fitzroy Road, Stanley on 11 February 1921 to Fred King and Ella, née Biggs. King spent his childhood next door at 49, and moved to 39 Fitzroy Road when he was married, essentially living his whole life on the same road. He was educated at the Government School in Stanley and on leaving school in 1936, he became messenger boy at the Post Office for two pounds and ten shillings per month. In March 1938 King began a five-year apprenticeship in the Printing Office and on completion was appointed assistant printer. He was promoted to head printer in 1959. He loved his trade and spent almost his whole working life in the Printing Office. Over his career he prepared a wide variety of printing, from wedding invitations and sweepstake tickets to the Falklands Councillors' appeal to the British Parliament in 1968 and the document conferring the Freedom of Stanley on Margaret Thatcher in 1983. He retired on 20 September 1988 after 52 years Government service. 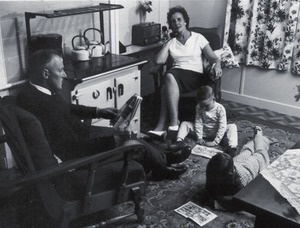 King served in the Falkland Islands Defence Force for 24 years, attaining the rank of sergeant and receiving a number of long service and efficiency decorations. His early service coincided with World War II and he served as a signaller on outposts around Stanley, keeping watch for invading forces. He was also a member of the FIDF band, where he played a number of instruments including the cornet. Along with other members, King represented the Falklands at the 1953 Coronation Parade in London: he always maintained that he got his Coronation medal for walking 13 miles in the driving rain! He was called up when the CONDOR Group landed a hijacked Argentine DC4 on Stanley Racecourse in 1966.

In his younger days, King was a very keen footballer and played as left half for Stanley's First Eleven against visiting naval vessels. He was also a keen badminton, snooker and darts player and loved ice-skating in the winter on ponds around Stanley. He tended his putting green at 39 Fitzroy Road with love and dedication for 57 years. His first golf club as a child was apparently a flattened syrup tin nailed to the end of a stick which he carried around in a horse's nosebag. 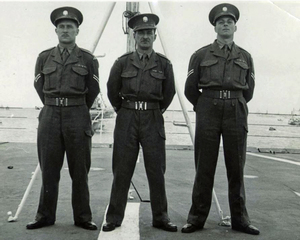 Soldiers three, in England for the...

King was well known in the Falklands through his insurance agency which he operated for some thirty nine years. Much paperwork for customers was delivered personally as he particularly enjoyed keeping in touch with people he had known for years. A quick visit by a customer to 39 Fitzroy Road to pay a premium could also turn into a much longer stay once the chatting, or golf, got underway!

King married Gladys Eveline Pettersson, the seventh child of Frans Axel Pettersson and Caroline, née Newman, on 14 March 1947 in Christchurch Cathedral. They had two sons Peter Thomas (b1955) and Robert John (b1960). Both Kings had a passion for the outdoors and he loved to get away to fish for mullet and trout. He was also a conservationist at heart, and was never upset if a fine sea trout escaped from his hook, as he believed that after a strong fight it deserved its freedom. He was also involved in the initiative to prevent the shooting of wildlife on Stanley Common and Cape Pembroke. Both the Kings loved dancing and were very adept ballroom dancers. 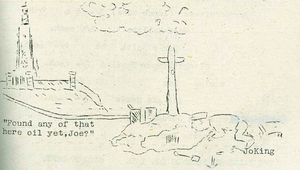 Joe King's cartoon that appeared in...

King had a deep love for his homeland, and hated with a passion the Argentine claim to sovereignty. He was a member of the Falkland Islands Committee which vigorously supported the campaign for Falkland Islanders to determine their own future. Over the years King also directly supported many other clubs and organisations - The Boys Brigade; Stanley Co-operative Society; Home Industries; Horticultural Society; Rifle Club; Civil Servants' Association; Working Men's Social Club.

He was a talented cartoonist and his contributions often appeared in the Weekly News, signed - in true punning fashion - 'JoKing'. A prophetic drawing published in 1946 - after the discovery of oil in Tierra del Fuego had been announced - shows workmen digging a deep hole for the new concrete lamppost on the Front Road outside Government House; one is calling down to the other 'Found any of that there oil yet, Joe?'  He contributed to the Broadcasting Committee for which, in addition to the very popular In the Potting Shed with Joe and Gene, which he produced with Gene Williams, he also gave darts match commentaries and popular musical/chat programmes. King was awarded the MBE in 1976 for services to the community. 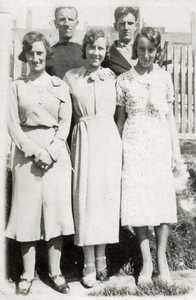