registrar, was born on 30 October 1916 at Stanley, the third of four sons of Arthur George BENNETT and Ethel Eliza, née Axton. He was educated in Stanley at St Mary's Sisters' school and then at the government school. He helped Jack McGill in his butchery as a lad and had a keen interest in rearing hens and ducks, trying for an improved strain and good egg production. He joined the civil service on 1 April 1932, firstly at the Penguin Daily News office, and then moved to the post office as mail officer travelling on the SS Fitzroy round the Islands. He maintained a keen interest in sports, football and athletics as well as boxing. He joined the Falkland Islands Defence Force before the outbreak of war and became secretary of the badminton club. With the outbreak of World War II on 3 September 1939, Bennett was sent to the Camber on outpost duties. He later served as clerk in the FIDF headquarters. He moved on to work in the Treasury and the Secretariat before joining the Legal Department. In 1949 he was made a Justice of the Peace and appointed registrar-general and registrar to the Supreme Court. Over the next 33 years Bennett presided over the courts, dispensing legal advice to the public, drawing up deeds, drafting legislation and performed many marriages. From 1957 to 1959 he took study leave in England, becoming a member of the Inns of Court and enrolling in the Middle Temple. He qualified in Criminal Law. During his busy career he served on ExCo and LegCo before retiring in 1982 as senior magistrate having devoted more than 50 years to the service of the Colony. 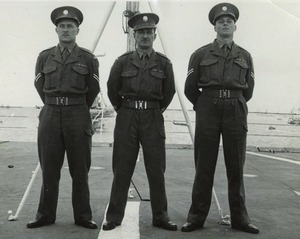 29 Soldiers three, in England for the...

In 1948 he visited Britain as part of the rifle team which won the Junior McKinnon and the Colapore Cups at Bisley, and brought both back to Stanley to display in the Gymnasium. In 1953 he was a member of the contingent representing the Islands at the Coronation Parade in London.

Harold Bennett married Grace Turner (widow) in 1961 and the service was performed by his brother Stanley, a unique event. He inherited his father's interest in natural history, and while on leave took various birds, mainly penguins, to zoological gardens in England to restock after the war. He became a member of the Zoological Society of London. After the death of Jack McGill's widow, Bennett inherited the property known as McGill's Butchery and other lands which included the Butchery Buildings adjacent to Dairy Paddock and some paddocks to the west of the racecourse. He also inherited the large house and garden on the junction of King Street and Allardyce Street where he pursued his hobby of gardening and the love of roses which he grew in the large conservatory. 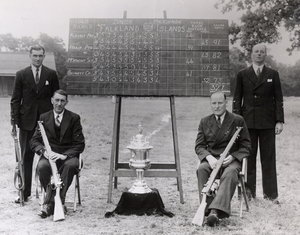 He had a great interest in horses, probably fostered by McGill, who had a few horses himself, and became for a number of years secretary of the Stanley Sports Association. Bennett was a patriotic man: he hedged and stalled continually when, during the Argentine occupation in 1982 he was flown in from camp at the 'request' of the authorities, to adjust the laws of the Islands to the Argentine system. He had a proud moment in 1983 when Mrs Thatcher visited the Islands: as the cavalcade drove along St Mary's Walk below his house, he rushed into the road, the cars stopped, and he presented the Prime Minister with a beautiful rose from his conservatory.

Bennett was a staunch defender of the sovereignty of the Islands, a firm Christian and a regular communicant at Christ Church Cathedral. He predeceased his wife when he died on 12 December 1999 in Stanley, a well-respected member of the community. 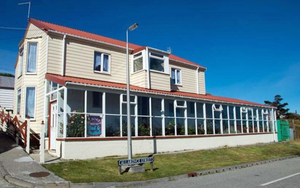