civil servant and naturalist, was born in Paddington, London on 26 January 1880, the son of Henry and Eliza Bennett (nee Axton).

His first job was in the Post Office of the House of Commons, and he also ran a small business selling ornithological specimens and apparatus.

Frustrated by poor prospects of promotion he moved to the Falkland Islands on 9 January 1912, and began work as a customs officer. Bennett married Ethel Eliza Axton in 1908 and their first child, George, was born in 1909. Ethel followed Arthur from England to the Falkland Islands after the birth of their second child - Stanley BENNETT (b1911; d 1984). They had three more children: Alice (b1914, who died as an infant), Harold BENNETT (b1916; d.1999 - who had a distinguished career in government service) and Arthur (b1918; d.1941). The family lived initially at Fairview Cottage, 3 Pioneer Row Stanley, but later the family moved to Gilbert House, Stanley. 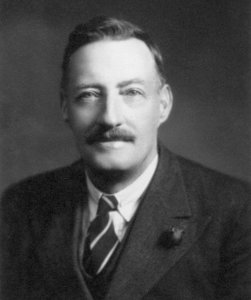 Bennett spent eight southern summer seasons on Deception Island, in the South Shetlands, serving variously as deputy collector of customs, chief customs officer, receiver of wrecks, whaling officer and postmaster. His first season was 1913-1914, when twelve floating factories and a large shore station operated at Deception, then the main centre of Antarctic whaling.

During the 1921/1922 whaling season he took part in the relief of the British Imperial Antarctic Expedition when two of its members - Bagshawe and Lester - had overwintered at Water Boat Point in Andvord Bay. On Deception Island Bennett made an annual collection of penguin eggs, for food and also for study and display in various museums. During his forays he would take fresh bread and a little butter in order to be able to produce fresh egg sandwiches - the eggs were boiled in the hot volcanic water. 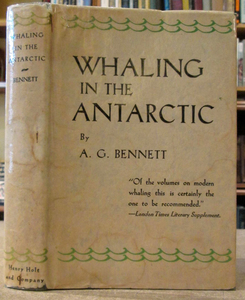 Bennett was an accomplished naturalist, and a number of the Discovery Expedition reports bear witness to his skills as an observer and recorder of the natural world. He was appointed Assistant Government Naturalist in 1922. Sir Sidney HARMER (1882-1950), the Director of the British Museum (Natural History), used the occasion of his Presidential Addresses to the Linnean Society of London in 1928 and 1930 to draw attention to the parlous state of some species of whales, and the statistics that he used were based on the meticulous work of Bennett.

Dr Stanley KEMP, the Director of the Discovery Expedition, wrote the Report of 1932 (concerning the distribution of whales) in collaboration with Bennett. The Discovery Report of 1937 contains a substantial report on the coastal fishes of the Patagonian region by JR Norman from the Natural History Museum who pays tribute to the work of Bennett: 'he provided detailed notes of the occurrences and habits of the fishes, which have proved of great value, and many of them are included in this report'. The Preface of the Discovery Report of 1946 on South Atlantic fishes states that most of the specimens were obtained by Bennett. 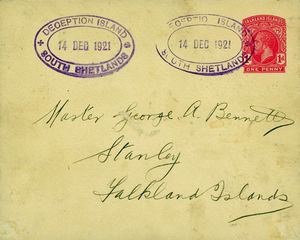 Bennett was an expert self-taught taxidermist and responsible for many of the exhibits in the Old Town Hall Museum (destroyed by fire in 1944). He preserved and mounted several hundred birds displayed there and made many of the original display cases. In 1922 and 1923 he was responsible for the preparation and dispatch of many of the Falklands exhibits for the 1924 British Empire Exhibition at Wembley. His family recall that he was an accomplished shoe and boot repairer, and delighted in the fact that during his time in the Falkland Islands he acquired the nickname of 'Old Big Feet'.

Bennett strongly opposed the introduction of the Patagonian Fox to Weddell lest it threaten the indigenous bird population. He was over-ruled by the Government, but several years later successfully prevented its introduction to New Island and Carcass Island. He was an accomplished photographer and water colourist and during the 1920s was regularly commissioned by Government to conduct surveys of the population of penguin and seal colonies. Many of the early wildlife photographs that exist today are the work of Bennett and his friend, Arthur COBB. He contributed to numerous scientific journals and wrote the first definitive list of all birds in the Falkland Islands and the Dependencies, published in Ibis in 1926. This 'List' was used by the Discovery Expedition of 1927 as the basis for cataloguing the birds of the region. 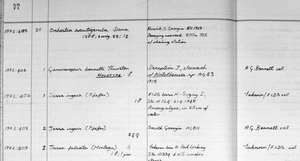 After his last summer on Deception Island, Bennett continued as customs officer in Stanley, until he retired in 1938.

Shortly after his retirement the Bennetts returned to England where they settled in Billericay, Essex. He continued to keep a lively interest in the Falkland Islands and regularly attended rifle competitions at Bisley whenever the Colony entered a team. Bennett returned briefly to the Falkland Islands in 1946 on behalf of London Zoo to supervise the shipment of a number of live penguins.

Bennett corresponded with Arthur COBB, of Bleaker Island, from 1907 until 1954, exchanging detailed comments about the bird life of the Falkland Islands and complaining constantly about the failings of government officials in the Islands, and problems with publishers. 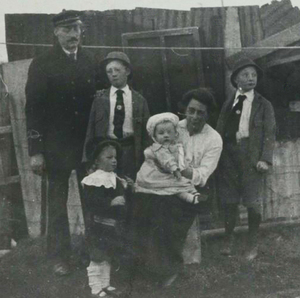 A group of islands in Hanusse Bay, near Adelaide Island were named after Bennett to commemorate his scientific achievements in Antarctica. They comprise, from north to south, South Granicher Island, Praff Island, Mugge Island, Megaw Island and Weertman Island, and are located 66°56' South and 67°42' West. His detailed knowledge of shellfish has been marked by the naming of a species after him - Gammaropsis bennetti - first collected and identified by Bennett at Deception Island in January 1918.

Bennett's book Whaling in the Antarctic was published by Wm Blackwood in 1931. In the Preface he commented: 'This book is based on thirteen years experience, during which a total of four years has been actually spent at sea with the whaling fleet. The illustrations are taken from my own photographs'. His many publications are listed in the Falkland Islands Journal of 1995. 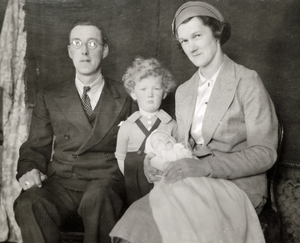 Arthur Bennett suffered from angina during the latter years of his life, and he died suddenly, aged 74, on 26 October 1954. Ethel Bennett died, aged 78, in 1961. Bennett had served the government of the Falkland Islands and the Dependencies for 26 years with great distinction. He had a wide variety of skills and interests, and he made a significant contribution to the understanding of the flora and fauna of the South Atlantic.

Editorial comment: (1) Arthur and Ethel Bennett's youngest son Arthur (1918-1941, and born in the Falkland Islands)  served in the Pioneer Corps. during World War 2; he was killed on 26 February 1941, during the London Blitz  (2) George Albert Bennett (the eldest son) was born in London on 11 November 1909; he married Lilian Gladys Alazia at St Mary's RC church, Stanley, on 6 March 1935. In 1944, George and his family emigrated to the UK. 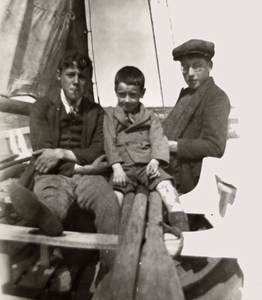 The Bennett boys sailing in Stanley...

Arthur George Bennett; A list of the birds of the Falkland Islands and Dependencies; Ibis; Vol 68 issue 2; April 1926

Hello. My name is Tony Bennett.

I am so happy to have found this page as Arthur Bennett is my great-grandfather. I remember grandpa telling the stories his father would tell him about being on the whaling ships (including exploding whales) or about the penguins.

I noticed here that my grandfather, George Bennett, is not named as one of the children. Was there a reason for this?

I try and keep our connection to the Falklands for our kids and hope to find a way to visit soon.

Thank you again for the great biography.
Tony

Good Afternoon;
I was searching the Last Will and Testament of George Author Bennett, who became the manager of St George's, Bermuda!
I am the granddaughter in law, the spouse of his grandson and daughter in-law of Alice South well Bennett!