lay reader and carpenter, was born in Fulham, London on 14 December 1911, the second of five children of Arthur George BENNETT and his wife Ethel Eliza Bennett, née Axton.

His mother took him to the Falkland Islands with his elder brother when his father took an appointment with government as whaling officer and magistrate based at Deception Island in the Antarctic. Bennett senior was away from his home in Stanley for each summer until 1928. 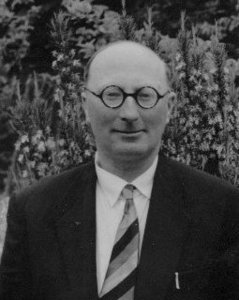 Stanley Bennett had poor eyesight and was taken to England for consultations, but the result was a prescription which remained constant all his life (and it did not prevent him becoming an excellent marksman with the ·22 rifle and shotgun). His last journey to England coincided with the return of the cadet crew of the sailing ship Fennia (which remained for many years as a floating store in Stanley Harbour).

Although an Anglican, Bennett was educated in the Sisters' School at St Mary's Church, and in Palmers Green on visits to London.

He was apprenticed to the carpenter's shop in the Public Works Department of FIG and followed that trade all his working life. He progressed from carpenter joiner at the bench to foreman carpenter in 1953-4 and then to general foreman in PWD and assistant superintendent. Apart from the usual repair and maintenance work on FIG property he was involved in the construction of the Gymnasium on Ross Road, the erection of Darwin boarding school, the Port Howard school and numerous other projects. He took on the job of undertaker/funeral director for 13 years. 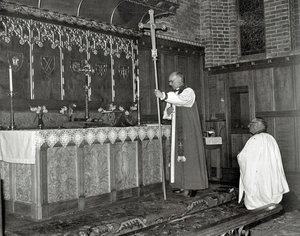 Bennett was an active person walking many miles in pursuit of wildfowl and was well-known as an angler first with a hand line and then with a rod, fishing for mullet. He was famed for his ability in foot events, especially the one mile. He was a Sea Scout and became a Rover Scout and a member of their racing crew.

Through the classes held for the Scouts by Dean Lumsdale he became interested in the Cathedral and joined many committees. He became chaplain's warden, then bishop's warden, and was finally licensed as a lay reader by Bishop EVANS. He campaigned to ensure that the Cathedral remained under the aegis of Canterbury, rather than in the diocese of Buenos Aires. 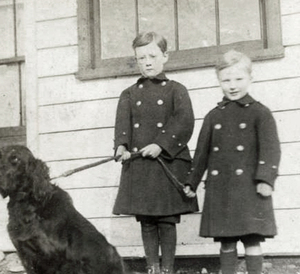 Stanley Bennett (right) with his...

During the Conflict, on 2 April 1982, he spoke indignantly to his son about the hauling down of the Union flag at Government House, in full view of his front room. He promised to look out each day until it was put back again - unfortunately when that happened, he was taking an after lunch nap!

Editorial comment:  Neville Bennett  (1937-2021) - the author of this article  - travelled to England onboard RSS Shackleton in 1958.. He trained in London as a dental technician – learning the vital skill of making false teeth. Neville Bennett's daughter, Rachel, has written: 'On his return home went on to put a smile on the face of hundreds of islanders. The Falklands then population of 1800 could never provide him with enough work to keep him in fulltime employment, so he took on a number of other jobs over the years.' Bennett served as a fireman during the Falklands Conflict in 1982. His wife Valerie, was the senior nursing sister and a midwife in the hospital.  An account of the  family's experiences during 1982 have been published in A Falklands Family at War'  (published May 2021)  See:  https://www.pen-and-sword.co.uk/A-Falklands-Family-at-War-Hardback/p/19020 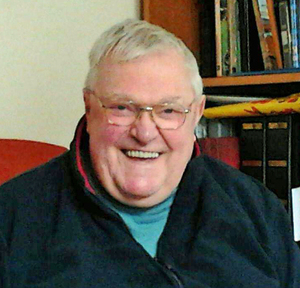