bishop, was born at Lampeter, Wales on 5 July 1900, to David Evans and Mary Rowland.  He served in the RNVR in the years 1916 to 1918 and subsequently attended university at Lampeter, graduating in 1922. He was ordained in 1924, and served as curate at St John's, Swansea for the following three years, and a further three years at St Martin's, Roath, Cardiff. Evans then moved to South America. In the beginning he served as assistant chaplain at St John's Pro-Cathedral, Buenos Aires, from 1930 to 1935. During that time he was given additional duties: as Bishop EVERY's chaplain (1933-7), and at the same time served as camp chaplain in various parts of the republic. Between 1936 and 1938 he was chaplain serving the parishes of Hurlingham and Villa Devoto in Buenos Aires; he then moved to Río de Janeiro to become vicar of Christ Church (1938-46). 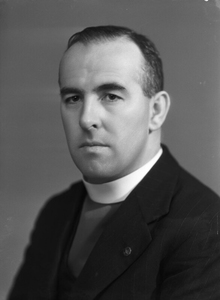 Evans was consecrated to serve as assistant diocesan bishop on 24 February 1939. He made a pastoral visit to the Falkland Islands in 1940, even reaching South Georgia. Accompanied by the Rev GK Lowe, he spent nearly a month on horseback, visiting the farms and settlements. On 31 July 1940  he married Leone Ernestine Helene Lefevre (1900-1977) in Buenos Aires.

In 1946, Evans succeeded Bishop WELLER as diocesan bishop in Argentina and Eastern South America with the Falkland Islands (and dean of Port Stanley). He was enthroned twice, in St John's Pro-Cathedral on 21 August 1946, and in Christ Church Cathedral, Stanley on 3 January 1947, thus marking the reuniting of the two former dioceses. His jurisdiction once again covered the whole of South America. He was awarded the CBE in 1952.

In 1950, it is recorded that of the 275 days occupied by his visits to the churches outside the River Plate region, 70 were spent visiting the Falkland Islands. Such an arduous life took its toll on Evans. On 30 July 1962 in Southern Chile, following the service of ordination of four priests, he died on the on the Pan American Highway at Parral, Chile  during the return bus journey to Santiago.

News of Bishop Evans' death was reported in the Falkland Islands Monthly Review on August 1962. It reported that Evans was buried in Buenos Aires. A memorial service was held in the cathedral in Stanley on Sunday 5 August 1962. He had first visited the Falklands in February 1940 in his capacity as the assistant bishop. The Monthly Review records: 'His Lordship always took an active interest in the well-being of the people, and the children will especially, will long be remembered with affection by the people of these islands.'

1. When the Governor of the Falklands - Sir Allan Cardinall was advised that the Archbishop of Canterbury had nominated Daniel Evans as the next Bishop the Falklands in succession to Bishop WELLER, the Governor telegraphed Evans "Please accept my sincerest congratulations and good wishes on your nomination as the Bishop of the Falklands." Governor Cardinall had met Evans previously on a number of occasions when Evans was visiting the Falklands as assistant Bishop.  Evans replied to the Governor "Greatly appreciate your warm greetings and shall not delay in visiting premier cathedral and colony."

2. On Easter Monday 1940 Bishop Evans published an open letter in the Falkland Islands Monthly Review expressing his concern and disappointment about the total absence of organised entertainment for the crews of visiting ships - both Royal Naval and Merchant Navy. He suggested the establishment of a de facto 'Mission to Seafarers' in Stanley - as is the case in many parts of the world. 'Every household in Stanley should be given an opportunity to participate in establishing what is bound to be a blessing to all who come to this harbour in search of a happy rest and change from the monotony of patrolling the seas.'