bishop, was born at Blackwell Hall, Chesham, Buckinghamshire on 6 October 1880, the son of Edward Weller and Edith Weller, née Aylward. His maternal grandfather had been Vicar of Chesham, Buckinghamshire, and three of his own brothers would eventually be ordained. His intention on leaving Bedford School had been to join the Royal Navy, but that was thwarted when he failed one of the eyesight tests during his medical.  Instead he worked his passage on a merchant ship to Ceylon (Sri Lanka) and found work as a tea-planter. 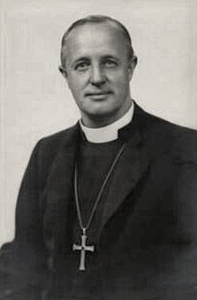 He was a volunteer during the Boer War in 1901. Weller spent the following years in the USA and Canada (which included working as a lumberjack) until 1910, when he attended Selwyn College, Cambridge, graduating in 1913 (BA).

At the age of 33 Weller was made a deacon by the Bishop of Ely in the University Church of Cambridge (Great St. Mary's) in 1913, and went out to serve in Delhi with the Cambridge University Mission.  He was ordained priest in Lahore Cathedral in 1914. Then from 1914 to 1916 he was a railway chaplain at Lahore, and in 1917, chaplain in Waziristan. In 1917-18, as a temporary chaplain to the Forces, Weller served as divisional chaplain in the 3rd Lahore Division in Mesopotamia, Egypt and Palestine, and then as divisional chaplain, 4th Quetta Division in Afghanistan in 1919. 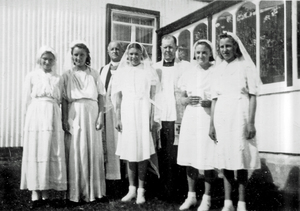 Confirmation by Bishop Weller at Fox...

Weller married Alexina Caley in 1916  - who had been an undergraduate at Girton College, Cambridge, at the same time as Weller was at Selwyn College. There were no children of the marriage and she died in 1934. 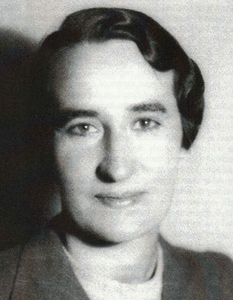 Shortly after the death of his first wife Weller received a very unexpected letter from the Archbishop of Canterbury, Cosmo Lang:

[He was] invited to stay the night at Lambeth Palace. he wondered what this might mean, and he was "astounded" when the Archbishop asked him if he would accept the post of Bishop of the Falkland Islands - a diocese which at that time included all the Anglican work in South America to the west of the Andes, from Panama to Tierra del Fuego , as well as the Falkland Islands themselves and South Georgia. The cathedral was at Port Stanley, which was the only part of the diocese that was British territory ... His answer was that he did not feel that he had the necessary qualifications, to which the Archbishop replied "that is my business".

Weller was consecrated bishop in Southwark Cathedral on 29 June 1934, having the same jurisdiction as his predecessor, Bishop DE JERSEY and again based in Valparaiso. However, three years later, Weller was translated to the Diocese of Argentina and Eastern South America in succession to Bishop EVERY. He continued to have the supervision of his former diocese of the Falkland Islands.

Bishop Weller arrived in Stanley on 26 January 1935, after a four month journey from Liverpool, and travelling through South America. He preached his first sermon in the cathedral on Sunday 27 January.  The Penguin newspaper recorded that on that on Thursday 31 January 1935 Bishop Weller was formally enthroned in Stanley cathedral - an event that had not been held in the Falklands for sixteen years, and only seen in the Falklands four times previously. The following evening Bishop Weller conducted his first confirmation service in the Falklands, (there were twelve candidates including Stan BENNETT, John BOUND, and Howell EVANS)  On 11 February the Bishop held a confirmation service in West Falkland as part of his round trip around the Islands onboard SS Lafonia.

Bishop Weller was part of the welcoming party for the new Governor, Herbert HENNIKER HEATON on his arrival in the Falklands on Sunday 10 February 1935.

Throughout February and March Weller was responsible for the parish of Port Stanley, as the dean was on leave.  He lived alone in the Deanery, but he found life somewhat frustrating. "There was nothing for me to do, a few sick people to visit and a few services to take". He could not leave town as there were no roads ... At the beginning of April there came a chance to break the monotony. A ship was going to South Georgia and he was offered the opportunity  to visit the southernmost part of his diocese. No bishop had ever been there before. though a former dean had visited the island some years previously. ... One morning he took a Communion service for ten people in the Magistrate's drawing room - "no one remembered when there was a previous service " ... Another highlight of his visit was a trip out to a huge whaling factory ship, the British-flagged Svend Foyn. The only way to get on to the 22,500 ton ship was by going up a rope ladder which was covered in whale grease, "the stench was  anything but pleasant." He was shown all over the ship and given an excellent lunch; the Norwegian food made a welcome change from the everlasting mutton he usually lived on in those parts. 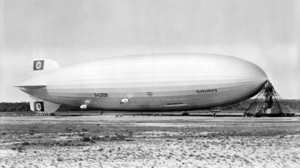 On his return from South Georgia to Stanley, Weller stayed with a doctor and his wife; he received a cable asking if he could find someone to take services in Santiago, as the Chaplain was seriously ill. His comment was "Not a hope - soon I shall be the only man in the diocese."

During Holy Week and Easter, He conducted services in the cathedral and was rewarded with a good response from parishioners. One old lady said "I have never known such a congregation dear Bishop, you know it is your face that does it." He urged them to continue to attend services, but sadly he doubted if the progress made would continue after the return of the dean, who was not popular. 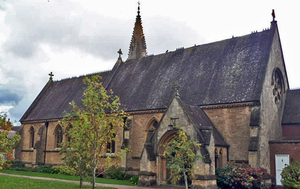 After the Easter celebrations in the Falklands Weller travelled by ship to Montevideo, with the intention of travelling acroos the River Plate to Buenos Aires. This involved obtaining a visa for entry into Argentina:

An application from someone styled 'The Bishop of the Falklands' was not regarded with much favour. First there was a refusal, then a demand for $80, which Weller eventually managed to reduce to $20.

In 1936 Weller flew by seaplane from Buenos Aires to Rio de Janeiro en route to England in an attempt to recruit at least six chaplains for unoccupied stations in his diocese. He flew to Europe onboard the airship Hindenburg on a four and half day flight to Fredrichshaven, before and onward passage to England. On arrival in Germany, one journalist wrote:

The first person to descend the gangway after the huge airship was moored was the fair haired, blue-eyed, ruddy faced smiling bishop. This led to some of his nephews to dub him 'the ruddy bishop', but the title 'Flying Bishop' was the one that the press used in subsequent reports.

Weller's trip was widely reported in the newspapers; the Daily Express reported that he had commented:

“One of the engines ‘conked out’ over the African coast, but the airship carried on perfectly smoothly on three engines.  It was a wonderful trip.  I enjoyed every minute of it. Just think of it -  if I had come by sea the journey would have lasted a month.  Taking ‘plane from Valparaiso to Rio de Janeiro; thence to Germany by the Zepp, and on to England from here, the journey lasted six days. All for an extra cost of only £25.  Zeppelin accommodation is just as good as in a liner, and of course the air voyage is a wonderful experience.”

In 1937 Weller assumed responsibility for the whole of South America and he was enthroned in St John's the pro-Cathedral in Buenos Aires. The extra demands of the job and the extensive travelling made serious demands on Weller and he became seriously ill. He was ordered to take three months rest and in April 1938 he returned to England to recuperate. He was nursed back to health by Frances M Butler, (b.1909 and thirty years his junior)  whom he married in 1938, and by her had a daughter (Elizabeth; b.1941) and a son (John; b.1945). After an absence of 11 months from South America, at the end of 1938, the Wellers returned.

In December 1939 the Wellers planned to visit the Falklands onboard HMS Achilles, but learnt that the ship was 'otherwise engaged' and not planning to return to South America. The Wellers always wondered thereafter if they had just missed being involved in the historic events of the Battle of the River Plate.

Weller remained bishop throughout the war years  -  travelling vast distances from Tierra del Fuego - right up to Panama. He made another visit to the Falklands in 1942 - conducting a Confirmation service at Fox Bay.  By 1946 he had now completed eleven years as a bishop of his enormous diocese travelling vast distances to visit the various chaplaincies and missions, but he now felt that 'the job was no longer suitable for a married man with a family'. Before resigning in 1946. he made one last (and lengthy) visit to his diocese.

He went first to the Falklands, and had the usual difficultly in gaining a passage from there to the mainland until the Navy came to his rescue with a minesweeper which took him to Punta Arenas ... from there he covered practically the whole of the diocese, involving journeys of many thousands of miles, before leaving by air to New York, and then England.

Back in England, Weller, who was now aged 68 and who had no intention of retiring, was appointed vicar of Edwalton, Nottinghamshire in 1946, and also appointed assistant bishop of Southwell from 1946 to 1952. In 1953 he moved to become vicar of Holme Pierrepont and Rural Dean of Bingham in the same diocese. Weller finally retired, at the age of 79 in 1958 after a very fruitful and happy time as a country parson.  The Wellers moved to accommodation for retired clergy at St. Leonard's Newlands - which included the private chapel of the Beauchamp Almshouses (now called the Beauchamp Community)

On the evening of 27 October 1969 he conducted a Confirmation service at St Leonard's Newlands - there were fourteen candidates.

He came home and had supper, and since he had, as always, put a lot into the service he had conducted, he felt the need to rest, and settled down in an armchair with a glass of whiskey. A few minutes later, he died.

Bishop John Weller was buried in the churchyard St Leonard's Newland. His wife, Frances survived him by twenty three years and was buried in the same grave in 1992. A long obituary appeared in The Times and the Church Times; many tributes were paid to Weller - both as a man and as a bishop.

In his years in South America he made an enormous contribution to the subsequent spectacular growth of the Anglican church in the continent  ... 'he was truly a man of God and a man of prayer'.

2. John Weller's nephew (Richard Weller) commented in 2002:  'When their daughter Elisabeth, nursing in Sydney, announced that she was getting married, he was determined to be present at the ceremony with his wife Frances. However, his doctor said he was unfit to fly. Undaunted, Jack took this literally rather than as an instruction not to go at all, and arranged to travel by cargo boat instead! Meanwhile their son John was commissioned into the Worcestershire and Sherwood Foresters Regiment, but his father did not live to see him reach the rank of Brigadier.

John Reginald Weller; Bishop over the Andes;  written in 1949-9, but unpublished.  (Original manuscript in the possession of Weller's son, Brigadier J P Weller)