bishop, was born in London on 11 November 1911, the son of Henry Calesdine Tucker and Lilian Beatrice, née Ridgewell.

After gaining his degree at St Catherine's College Cambridge in 1933, where he received a half blue for the half mile, and then theological training at Ridley Hall, he was ordained in 1935 as Curate in the Parish of St. Mark's, Dalston. He moved to Cambridge for a year in 1937 and was then appointed youth secretary of the British and Foreign Bible Society in 1938. He served as a chaplain in the RAF Volunteer Reserve between the years 1939 and 1946 and was captured in Java in 1942 by the Japanese, remaining a prisoner of war for three and a half years. After the War, Tucker continued to work with young people, until he moved back into parish ministry in 1957 as vicar of Holy Trinity Church, Cambridge. 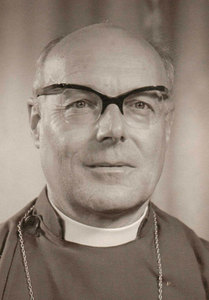 434 The Bishop of the Falklands

In 1963 Tucker was chosen by the Archbishop of Canterbury to be the next bishop in Argentina and Eastern South America with the Falkland Islands and was consecrated in Westminster Abbey on 18 October of that year. He was the last local bishop to have jurisdiction over the Falkland Islands. Tucker was given the task of creating a Spanish-speaking, Latin American, Anglican church, which was gradually to take the place of the then immigrant, English-speaking church. He presided over the division of the diocese, with the creation of the Diocese of Northern Argentina and Paraguay in 1969. This led in due time to the formation of CASA, the Consejo Anglicano Sudamericano, in 1974, which for the first time gave a collective voice and governance to the dioceses of the southern part of South America.

Up to this moment, the senior chaplain in Stanley and his congregation still remained under the jurisdiction of the Bishop of Argentina and Eastern South America. But CASA gave its member dioceses independence from the Archbishop of Canterbury, in particular in the appointment of diocesan bishops, and it was realised that this implied that the Anglicans living in the Falkland Islands would in time find themselves under the leadership of an Argentine bishop. This provoked a strong reaction from Islanders, so that arrangements were immediately made for Anglican work in the Islands to remain under the jurisdiction of Canterbury. 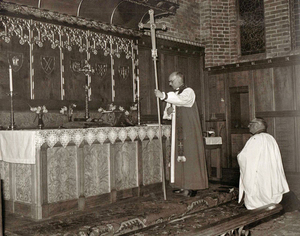 Tucker made many episcopal visits to the Islands, some of which were for weeks at a time. In 1975, he retired from the Diocese of Argentina but continued as bishop of the Falkland Islands for a further year until arrangements could be made for Canterbury to assume direct responsibility. During this latter period, he did not visit the Islands. In 1975 he was awarded a CBE.

After retirement he settled in Cambridge, with his wife Kathleen, née Merry, where he continued his enthusiastic support for the church in Argentina for many years more. He also derived much pleasure in building a modest philatelic collection of the Falkland Islands. He died in Cambridge on 2 September 1992, being survived by his widow and his three children, John (b1941), Rosemary (b1946) and Susan (b1949).

Editorial comment:   From Tucker's obituary the in St Catherine's College Cambridge magazine:  'There was a certain 'matter of factness' about his way of life; in no sense did you ask if you were happy or enjoyed your work, you just got on with it. In fact he enjoyed life tremendously, but the toughness in his character enabled him to cope with problems, not least when he was a prisoner in the Far East. He saw his friends die, and cruelty all around him; but with fellow Christians he celebrated the sacrament with water in a cracked cup behind the latrines.'