German sea-captain, circumnavigator, polar explorer and whaler became in 1936 the manager of the first German pelagic whaling company to operate in the Antarctic following a period spent gaining practical experience of the industry at South Georgia. 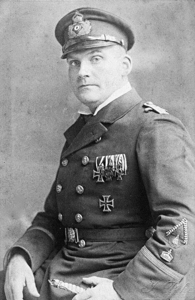 Carl Kircheiss (or more correctly in German: Kircheiß) was born on 17 July 1887 the fifth of six children of an innkeeper and hotelier Carl Kircheiss (1853-1904) and his wife Johanna Marie Louise (1860-1944) in Harburg (Elbe), Germany. After his primary education, in 1901 he joined the Hamburg barque Nürnberg as a cabin boy and voyaged from Hamburg to South America with a return voyage to Riga. By 1902 he had been promoted to an ordinary seaman sailing to Australia and South America.

After attending navigation school in 1908, he obtained his mate’s certificate and by the end of that year he was serving as third officer on the fully-rigged ship Maipo for a voyage around Cape Horn. In 1912 he obtained his master’s certificate to become, at the age of 25 years, one of the youngest master mariners in the German merchant marine. In the years that followed he served as an officer for the Hamburg South America Steamship Company and at the same time as a reserve lieutenant in the German Imperial Navy. 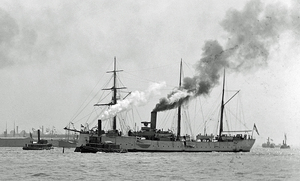 At the outbreak of World War I, he returned to Germany by way of an Italian steamer with false papers and was appointed artillery and navigation officer on board the auxiliary cruiser Seeadler (Captain Lieutenant Felix, Graf von Luckner).  During the war Kircheiss served with distinction. He later described how, disguised as Norwegians, he and his comrades had slipped through the hands of British fleet in the North Sea and sunk no less than seventeen Allied merchant vessels. His activities were only brought to a close following shipwreck and subsequent capture in the Pacific and internment in New Zealand.  He was awarded the Iron Cross 1st Class for his service.

After the war he and a colleague founded a wholesale tobacco business in Bremen and he began life as a lecturer, promoting understanding between the former warring parties and encouraging the revival of German maritime shipping. This led to his giving a series of lecture tours world-wide and his chosen method of transportation was a sailing vessel, the Hamburg, a former fishing cutter. In the period from January 1926 to December 1927 he circumnavigated the globe and became well known. 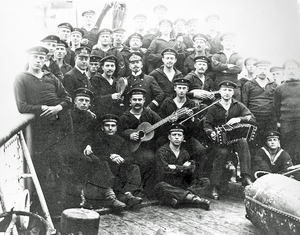 Crew of SMS Seeadler (Kirchleiss is...

Kircheiss took advantage of his growing fame by undertaking further lecture tours and campaigning for Germany to enter the whaling trade. In December 1930 he took passage to South Georgia on board a Norwegian tanker Leiesten, arriving at Husvik Harbour on 19 January 1931. With the co-operation of the Norwegian whaling station owners, A/S Tønsbergs Hvalfangeri, he was able gain valuable experience of the methods of catching and processing whales, spending part his period there on board the whale catcher Busen 4. Many of these operations were captured on film.

On his return to Germany, Kircheiss began to formulate plans to create a German whaling company, in response to the country’s dire need for fat. His collaborator was Otto Kraul (1892-1972), the most experienced German whaler who had gained practical experience as a gunner with the Argentine registered company Compañia Argentina da Pesca at Grytviken during and after World War I. 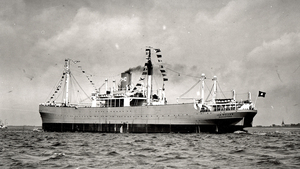 Jan Wellem on her maiden voyage

On 25 March 1935, the Erste Deutsche Walfang Gesellschaft GmbH (The First German Whaling Company Ltd.) was born, with the support of Henkel & Cie as well as German margarine manufacturers like Walter Rau. A factory ship, the Jan Wellem, converted from the HAPAG passenger vessel Würtemberg, was purchased and a fleet of six whale catchers constructed to support the expedition. Kircheiss became one of the two board members as technical and nautical director and Kraul acted as whaling manager of the catching fleet on board his catcher Treff V.

On its first voyage to the Antarctic the ship and its fleet called at King Edward Cove, South Georgia on 29 October 1936 and sailed away two days later for the whaling grounds. The expedition was a great success, capturing 901 whales and producing 61,992 barrels (10,332 tons) of oil. 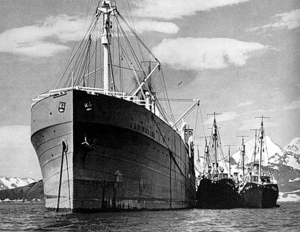 In the following years the Germans increased their whaling fleet so that by 1938, seven expeditions were in operation in the Antarctic. In spring 1938/39 Kircheiss took command of the newly acquired Wikinger, a large modern factory ship that had been constructed at Wallsend-on-Tyne by Swan Hunter & Wigham Richardson Ltd in 1929 for a British company, the Viking Whaling Company, in which the former governor of the Falkland Islands, Sir William ALLARDYCE was a shareholder.

During World War II, Kircheiss was given command of a minelayer, the Kaiser. When this was torpedoed, he suffered serious injuries. After his partial recovery he became a naval instructor in Hamburg and then commanded a military district in Westphalia. 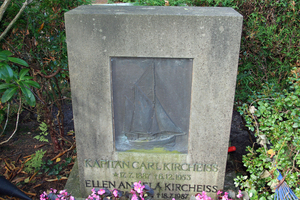 During the war most of the German whaling fleet was destroyed and what remained was sequestered by the Allies. In 1949 Kircheiss decided to go sailing again, so he purchased a small naval boat and re-rigged it into an ocean-going vessel then called Wal hooo. In 1951 he sailed single-handed to the Azores, but soon thereafter he got caught in a hurricane and had to abandon his ship and his planned Atlantic crossing.

Carl Kircheiss died in a traffic accident in Hamburg on 6 December 1953 and was buried in Nienstedten Cemetery. He was survived by his wife Ellen Ilona (1898-1987) whom he married in 1933, and by a son and a daughter.