merchant, was born in Liverpool on 14 May 1807, the son of Samuel Lafone and Mary, née Ellison. His father and grandfather were Liverpool merchants with close connections with the leather tanning industry. Alexander is unlikely to have had many memories of his mother who died when he was only five. Two years later his father remarried but there is no suggestion of any family estrangement arising from this at any time. 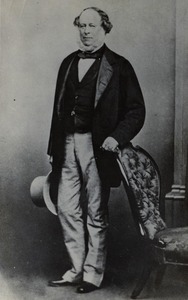 In 1825 his elder brother Samuel Fisher LAFONE had sailed to Argentina to set up business there, and Alexander followed him within the next year or two. He was one of the witnesses at his brother's notorious wedding in Buenos Aires in 1832. As a result he was arrested and fined 500 pesos. He was kept in confinement, with the other men who were party to the ceremony, pending expulsion from the country. Some accounts assert that Alexander Lafone was expelled, but since the others were pardoned this seems unlikely. The result would, no doubt, have been the same for he preceded his brother to Montevideo (Samuel was busy getting married legally) to start the extensive business interests of the brothers in what was to become Uruguay.

After 12 years assisting his brother he returned to Liverpool with offices at 20 North John Street, Aigburth in 1839. There is no doubt that he was instrumental in finalising Samuel Lafone's investment in the Falkland Islands. He signed the agreement with the British Government (on 16 March 1846 in London) and negotiated its finance with Ricketts, Boutcher and Company. As well as his own business interests he was obviously acting as Samuel Lafone's British agent: culminating in his proposal for a company to buy out the Lafone's Falkland interests (the stillborn Royal Falkland Land, Cattle, Seal and Whale Fishery Company), and he convened the initial meeting of what was to be the Falkland Islands Company.

When that Company in frustration took the step of suing its major shareholder, Samuel, for fraud the Chancery bill included Alexander as a defendant. This reflected the importance of his role in forming the Falkland Islands Company, and the fact that many of the statements about which the Company were aggrieved had flowed from his pen. In the early part of 1857 that pen was again put to use on behalf of the brothers in writing an answer to the accusations of the Company, and this was forwarded to each shareholder with a covering letter asking them to 'form their own conclusions on the evidence that he submitted'. This was 'a recommendation with which the Directors had no disposition to interfere' relying (to paraphrase the 1857 annual report) on the judgement of the shareholders, and the fact that the Directors owned most of the shares anyway. It is clear that the younger brother had again played an important role in Samuel's affairs, and those of the Falkland Islands.

At the time these momentous events were taking place, he was living at home in the West Derby suburb of Liverpool with his father (then 81), his wife Emily Featherstone Griffin (1817-72), a sister, a two-year-old nephew, and five servants. He continued to be interested in the Falklands, battling with the colonial administration on behalf of the Company, and in particular about the establishment of a postal service. He obviously ruffled feathers since the Colonial Office described him as not easy to deal with as 'he unsettles matters previously agreed'. When his father died the family had to move from his house. Alexander and Emily Lafone moved to Thingwell Hall in the Wirral but this fine Georgian villa was to be no happy retirement home. Emily's last 15 years were blighted by mental problems, and, after her husband's death, she spent her final three years in a nursing home. Alexander had retreated to Hastings, where he died on 14 June 1869 of kidney failure.

There can be no doubt that Alexander Lafone played a significant part in the formation of his brother's business empire, and the lack of his organising abilities in Montevideo may have led to some of the problems experienced after he left, especially in relation to the Falklands venture. But he was required to pursue these in England where his role was significant. Sadly for Samuel Lafone, and the Falkland Islands, Alexander could not be in two places at once!