Swedish explorer and tour operator, was born in Stockholm on 23 January 1927. His father was a wine expert in the Swedish Liquor Monopoly, and his mother was the daughter of a master cabinet-maker. He was a voracious reader from the age of seven, becoming fascinated by explorers and especially the Swedes Sven Hedin and Nils NORDENSKJÖLD. After university in Switzerland, he had planned to work in the steel industry, but a summer job with Thomas Cook in Stockholm changed his mind. He felt confined in Sweden, however, and at the age of 24 emigrated to the wider horizons of the United States, where he obtained a job with American Express on the very day he arrived in New York in 1951. In due course he became a US citizen. 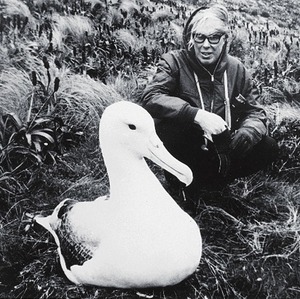 Lindblad's career really took off when he founded his own company, Lindblad Travel, Inc., in 1958. His good fortune was that in those days American tourists were travelling to only a handful of safe, familiar countries. Lindblad's earliest dreams had been of remote and exotic destinations, and he had a passionate and restless desire to explore these distant lands. His enthusiasm easily persuaded others to feel the same way. Over the years his company pioneered the concept of expedition travel, and opened up an extraordinary variety of faraway and often unlikely places to well-heeled tourists. His tours were not cheap because he did not believe in discomfort unless there was no alternative, but from the very beginning he offered imaginative itineraries combined with stimulating lectures and knowledgeable guides.

His interest in the Falkland Islands was sparked in 1968 when the Falklands naturalist Ian Strange called at his office in New York, at the suggestion of the renowned bird artist Roger Tory Peterson. Lindblad was not there but the seeds of interest were sown and Lindblad asked Strange to set up a visit to the Falklands for his chartered cruise ship, the Navarino, in 1968. This was a former Chilean navy ship, converted for passenger use, and was not ideal but it served its purpose and the first-ever tourist cruise of the Falkland Islands was a great success. Ian Strange and his wife Maria had made the local arrangements, choosing West Point and Carcass Islands for passenger landings. 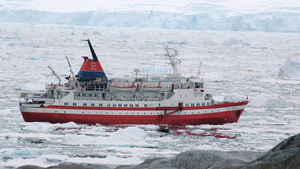 Meanwhile, a very special ship was taking shape in a Finnish shipyard. The Lindblad Explorer, purpose-built for out of the way and unusual destinations, was relatively small, ice-strengthened, and fitted with bow-thrusters for manoeuvrability and evaporators for ensuring ample supplies of fresh water. Most important was the small fleet of rubber Zodiac landing craft which enabled passengers to land anywhere in the world, without the need for a dock. This single idea undoubtedly revolutionized cruising to remote places. And that included the Falkland Islands.

After an eventful maiden voyage during which the Lindblad Explorer caught fire in mid-Atlantic, and had to enter dry dock in Montevideo for extensive repairs, the ship departed Punta Arenas, Chile, in February 1970 on a sub-Antarctic cruise bound for the Falkland Islands, South Georgia, Gough Island, Tristan da Cunha, and finally Cape Town. Aboard were a team of lecturers including Roger Tory Peterson, Robert Cushman MURPHY, an eminent American biologist, and Keith Shackleton, the British marine and wildlife artist. 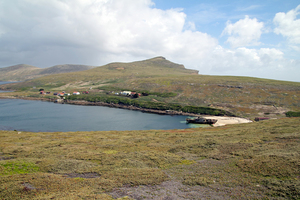 New Island - one of the destinations...

The ship was given a very warm welcome in Stanley where people invited the passengers into their homes. In return Lindblad arranged a buffet lunch in the cathedral hall for over 400 Islanders. He then invited some eighty 'leaders', including the governor, Sir Cosmo HASKARD, to dinner on board the ship. This had its funny side. During cocktails Lindblad had discovered that the main dish was to be lamb, which he knew was hardly a treat in the Falklands. The frenzied efforts to substitute steak for lamb were successful, but must have distracted Lindblad, who managed to welcome 'all of you from the Galápagos Islands' in his speech. This faux pas was greeted with roars of laughter. He gamely carried on and finished his speech, only to end by making exactly the same mistake. As he sat down amid further friendly laughter, the governor rose to respond. Taking the microphone, he said 'As Her Majesty's representative at the Gilbert and Ellice Islands, I'd like to thank the nice Mr Blomqvist for his hospitality and welcome his new ship, the Beagle.'

The next stop was a memorable first visit by a cruise ship to South Georgia, where 25 British Antarctic Survey staff came aboard for dinner, and willingly repaid their hosts' hospitality by guiding the passengers on their trips ashore. 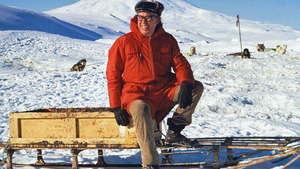 Lindblad's cruises to the Falkland Islands continued over the years, often combined with Antarctic cruises, and have been copied by an increasing number of other companies. He would be pleased that the smaller vessels making landings at places like Carcass, West Point, and New Island, as well as Stanley, still follow the Lindblad pattern of combining conservation-conscious travel with adventure, pleasure and learning, the latter provided by specialist lecturers. And he would be especially proud that his son's company, Lindblad Expeditions, is a leading exponent of this type of low-impact travel.

Unfortunately, towards the end of his career Lindblad's passionate belief that travel leads to understanding and thus to peace was his undoing. Tours to Cambodia and Vietnam in 1987-89 had violated the United States Trading with the Enemy Act, and the legal costs of defending his actions caused Lindblad Travel to close. Lindblad was unrepentant: 'To embargo travel is like burning books or imprisoning journalists.' 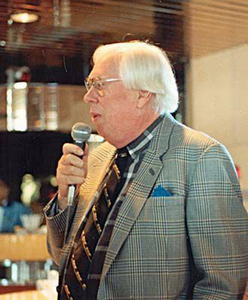 Lars-Eric Lindblad - the father of...

Lindblad received a host of honours and awards. The King of Sweden made him a Knight of the North Star, and Prince Bernhard of the Netherlands awarded him the Order of the Golden Ark. He was elected to the Hall of Fame of the American Association of Travel Agents, while the American Express Company gave him a special trophy. He was an innovative pioneer who was described by the President of the United States Tour Operators' Association as 'probably one of the most creative people who was ever involved in organizing travel'.

He was the father of Falklands' tourism.

Lars-Eric Lindblad married Sonja Buschinker in 1948, and had one son, Sven-Olof. Divorced in 1979, he married Cary Ann Butera, who died in 1984. He married Ruriko Hosaka in 1986. He also had two daughters, Cristina and Ana-Maria, with Esperanza Rivaud.

He died of a heart attack, by coincidence in Stockholm, the city of his birth, on 8 July 1994.

Some of his ashes were placed under some endemic Felton's flowers in the garden of Roddy and Lily Napier at West Point Island.

Writer and editor specialising in natural history and travel.