colonial secretary, was born on 1 July 1842 at Aberdeen, the son of G Melville of Culdrose, Fife. He was educated at Edinburgh Academy and by private tutors and entered the imperial civil service by competitive examination in 1862. He remained in London working for the Inland Revenue and was also a lieutenant in the Kent Artillery Militia. In 1869 he married Marie Elise Louise, daughter of Capt FitzLanders of Charlton Hall, Northumberland. Owing to his wife's health, he transferred to the colonial civil service in 1874, though his first three postings were all in tropical climates. He went to Sierra Leone as treasurer and thereafter he served in British Guiana {Guyana} and British Honduras {Belize}. In British Honduras he administered the government in 1890-1 and was awarded the CMG. 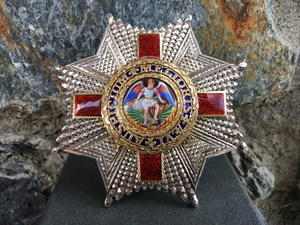 Knight Commander star of the Order of...

Melville came to the Falkland Islands in March 1893 as colonial secretary to administer the government until October while Governor GOLDSWORTHY was on leave. It was a time of some tension between Goldsworthy and the landowners, who were resisting his attempts to make land available to colonists, and who had refused to act as Justices of the Peace (JPs). As sometimes happened, the officer administering the government (Melville) pursued a different policy from that of the governor. Melville was able to report that the JPs (effectively the landowners) had returned to their duties. He also held a high opinion of the magistrate ROUTLEDGE, whom Goldsworthy distrusted.

In 1894 he played a similar role as officer administering the government in the Bahamas and went on to a succession of West Indian posts: the Leeward Islands, Antigua, St Lucia and the Windward Islands. He was knighted as KCMG in 1902 and retired in 1905.

He died of pneumonia following influenza in London on 24 February 1924, leaving one son and two daughters.