chief police officer, was born on 2 August 1938, a fourth generation Islander and one of eight children born to James Peck and Ellen (Nellie) Peck, née MacAtasney.

He attended the infant/junior and senior schools in Stanley leaving at 14 years and joined the Public Works Department. After a spell at Ajax Bay he was re-employed by PWD as apprentice plumber and heating engineer. 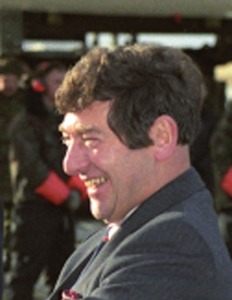 On 1 January 1960,he joined the police, learning the tasks of policing from serving members, and law from the few available textbooks. In March 1964, he was sent to the Metropolitan Police Training School in London, moving on to Hendon Police College and attachments in Leeds and Durham.

Back in the Islands, Peck was promoted to senior constable in 1965, and in 1966 was made acting officer in charge, with the rank of sergeant.  In September 1966 the CONDOR Group hijacked an Argentine DC4 and force-landed on Stanley racecourse.  Peck was taken hostage by the terrorists, but managed to escape. The group of 18 surrendered after 36 hours, and were guarded by the Police, with assistance from the Falkland Islands Defence Force, until their repatriation three days later. 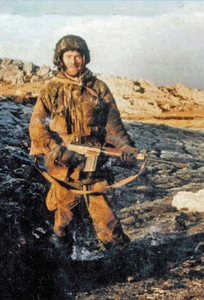 Terry Peck with the Paras on Mt...

In 1967, he was commissioned with the rank of inspector and in 1970 promoted to the rank of superintendent, becoming chief police officer. In 1976, he was awarded the Colonial Police Medal for Meritorious Service and attended the Overseas Command Course at the National Police College, Bramshill.

In October 1976, he carried out extensive investigation into the crash of the FIGAS Beaver aircraft in which Captain Ian CAMPBELL died. He retired from the Police in early 1980.

In October 1981, Peck was elected to the LegCo in a landslide victory. He was recalled to police duties on the eve of the Argentine invasion. To avoid being taken prisoner he acquired a motorbike and left Stanley on 21 April, spending the next five weeks organising resistance and sabotage in the hills in the North Camp. He joined British forces on 24 May and was attached to the patrol company of 3 Battalion the Parachute Regiment, carrying out reconnaissance missions near Argentine positions and taking part in the bloody battle of Mount Longdon. 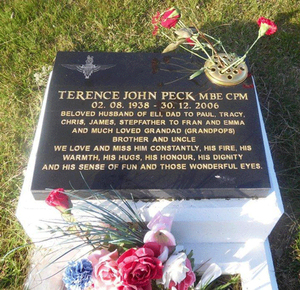