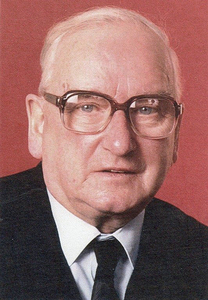 While Joe Booth was still very young the family moved to Punta Arenas. Along with his two brothers and sister, he was educated at the British School in Punta Arenas. Aged 11 he was confirmed into the Anglican church at St James Church, Punta Arenas, by Bishop Norman de JERSEY.

Joe Booth was trained as an electrical engineer and at the age of eighteen he did his national service in the Chilean Navy. On leaving the Navy he joined his brothers in the family company which owned and operated a garage servicing cars and other vehicles. At the outset of World War II John Booth returned to the UK and enlisted as a trooper (service number 14123450) in 5th Royal Inniskilling Dragoon Guards – serving with the Royal Armoured Corp. He was killed in France on 2 August 1944 and is buried in the Bayeux War Cemetery. Joe and Alex Booth decided that following their brother’s death that they would close the garage and pursue other careers. 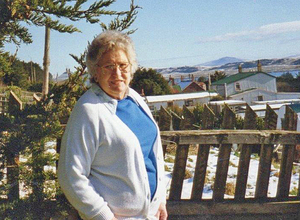 In 1941 Joe Booth married Maruja (known as Mary) Bonacich (b.1 December 1914 in Punta Arenas) who was of Croatian ancestry. There were four children - Myriam Margaret Lucia (b.1943 in Punta Arenas), Nancy Elizabeth (b.1948 in Punta Arenas), and twin sisters Sandra Beatrice and Mary (b.1958 in Stanley). Sadly, Mary Booth (known in the family as ‘Little Mary’), died after a few hours of life and is buried in Stanley cemetery.

Joe Booth continued to work as an electrician, and he was particularly interested in radios. With a friend he opened a radio repair shop. He was much involved in installing electricity to many farms in the Magallanes region, and he became very well known in the British and Croatian communities in Punta Arenas. He was a member of the Red Cross and a volunteer and Captain in the No 5 fire brigade company. 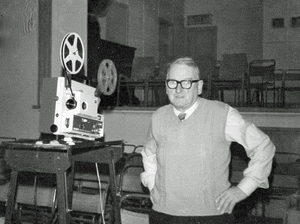 On 15 August 1955 Joe Bootharrived in the Falklands having worked his passage as an engineer on M/V Gentoo. He signed a five-year contract, as an electrician, with the Falkland Islands Company, primarily to instal electricity to the farm settlements, as he had done in Southern Chile. This was done over a period of time with the help of his apprentice/assistant Les Harris. starting by connecting the FIC owned settlements, then later the privately owned farms. Booth eventually worked for the FIC for 31 years.

In October 1955 the family joined him in Stanley.

Booth was an extremely skilled electrician, with the ability to complete a huge range of tasks – everything from wiring many houses in Stanley and on the farms and settlements – to rewiring complex electrical machines. During a period of leave in the UK he attended training courses to enable him to repair radar sets.  The family recalls how his interest in ship’s radar came about: 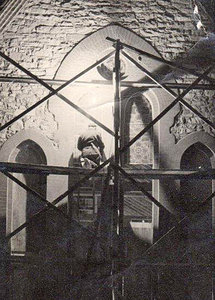 After one arrival of the cargo ship A.E.S. the captain reported that the radar was not working. A technician working with a local communication company was asked to repair the radar, but after various attempts to find the cause of the malfunctioning radar no solution to the problem was found. Joe, who had been standing back and watching proceedings, asked the captain for his toothbrush, the captain knew not to second guess Joe, handed his toothbrush to Joe, who then brushed all the connecting wires clean, reconnected them and the radar was again functioning. 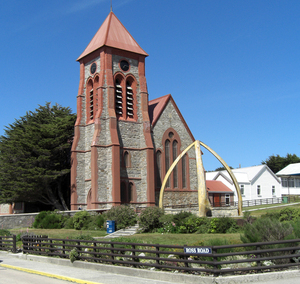 Booth was fully active in the local community. He was a member of the Cathedral choir and he helped to organise the annual winter cathedral bazaar. He was a long-standing member of the Falkland Islands Philatelic Study Group. He produced a range of philatelic covers for a number of stamp collectors.

He re-leaded and repaired the stained glass in the west window of the cathedral in Stanley. He underpinned the foundations of the cathedral Parish Hall by climbing under the building and constructing, by hand, new concrete supports for the floor. 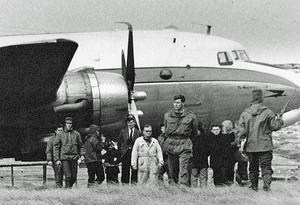 DC4 incident - Joe as interpreter in...

The Parish Hall became the location of a twice weekly film show after Booth had obtained a cine projector. He obtained many of the 16mm films he showed from the Government Film Library, which contained hundreds of feature films going back to the 40s. He did get a few films from the UK, and he imported films from Montevideo. The Parish Hall film shows were initially intended as a fund-raising venture to pay for a new boiler for the Cathedral. When sufficient funds had been raised for the new boiler, the Cathedral council decided there would be no further need for the Parish Hall film fund raising, it was then that Joe formed a business and continued to have the film shows in the Parish Hall.

From the early 1950’s, there were also film shows in the Town Hall on Sunday nights, operated initially by Les HARDY and later his son Tony (owners of the Kelper Store).Tony Hardy continued to operate the Sunday night film shows at the Town Hall, but on his death in the mid 70’s., this ceased, and as the cinema going public missed this extra entertainment, Booth then took over the running of the Sunday shows in the Town Hall, and these continued until the conflict of 1982. He was assisted in these film shows by Phil SUMMERS and Ted Clapp, who acted as the assistant projectionists. These film shows left a lasting impression on the community and they became a Falkland tradition that was greatly appreciated by many. 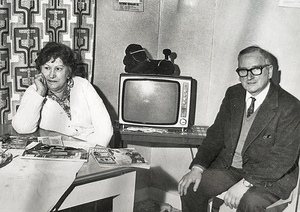 An early television set in the home...

One local resident has commented about the Parish Hall film shows thus:

At the Parish Hall film shows I clearly remember that Joe would make a habit of standing at the door at the end of a show saying goodbye to people and asking if they enjoyed their evening. He was proud of what he was doing - and rightly so… The Sunday night shows in the Town Hall were also really important. He took huge pride in providing such an important social service at both locations. Especially in the winter, life in Stanley could be very dull indeed, and the cinema was very popular.

He was very interested in all forms of radio communication, and he built his first transmitter as a radio ‘ham’ he operated with the callsign VP8BN. His home in Stanley was soon equipped with various kinds of wire aerials supported by poles around his property. 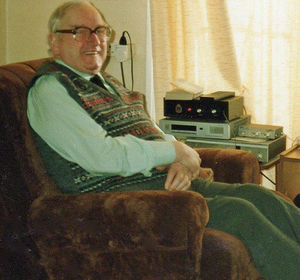 Joe in retirement on the radio

Booth was a fluent Spanish speaker. On 28 September 1966, on seeing an Aerolineas Argentinas DC4 flying over Stanley, he accompanied L W YOUNG (Manager of the Falkland Islands Company) to the aircraft which had landed on Stanley Racecourse. The aircraft had been hi-jacked as part of Operation CONDOR and there were armed hi-jackers on board. Despite attempts to negotiate with the hi-jackers, with Booth acting as interpreter, he, along with several other bystanders, were taken hostage and spent several hours onboard the aircraft until they were safely released later that evening. He remained at the scene after being released and continue to translate.

In the early 1980s he became keenly interested in television and after having designed and built his own receiving aerial he became able to receive television in his home. Later he built his own satellite television dish (with mixed results) before he purchased a commercially available dish – which then enabled him to be one of the first in the Falklands to receive television from all around the world. On occasions when there was a major boxing match, and also during World Cup football matches, he would invite fans to come to his house and watch the various events.

Booth was one of the first people in the Falklands to have a video camera. His brief clip of Argentine troops advancing aggressively but cautiously along Fitzroy Rd during the invasion on 2 April 1982 may be the only moving images of the actual invasion, and certainly they are the only moving images captured that day by an Islander.

Maruja Booth had a slightly complicated issue with her Christian name – she was named at birth Maria, but she was to be called Maruja. Her legal registered name was Margarita, but her British passport: had the name Mary. She was a dedicated wife and mother, despite not being fluent in the English language, she settled in well into the Falklands community. She was an active member of St Mary’s Roman Catholic Church, assisting with their annual Christmas Bazaars. She had been trained as a hairdresser in her youth and was in high demand by ladies for their ‘home perms’.  She was also an excellent home baker, producing tasty cakes for her daughters’ birthday parties, which were enjoyed by all. She is probably best remembered for her introduction of Chilean empanadas to parties and social events in the Falklands.  She was also a keen radio amateur operator with the call sign VP8DR.  It was her hobby, and she spent many hours communicating with worldwide radio ‘hams’.

Joe Booth was a great conversationalist and his knowledge of a wide variety of subjects was underpinned by his prodigious reading habits. Those that took time to listen found that he was both wise and well-informed. He was a devoted family man.

Joe Booth was a very well-known character in the Falklands – forthright and direct in speech but friendly in manner. He was a pioneer in many aspects of community life to which he made a considerable contribution.

Excellent article about a wonderful man with whom I spent time talking about his past, a man who always had an interesting story to tell.