civil servant, was born in Stanley on 10 November 1925, second son of Sidney Summers and Alice, née Lanning. He and his older brother Len were educated at the Government School, Stanley. His father Sid was well known as the Radio Telephone operator, keeping remote farm settlements in touch with Stanley at a time when there was no inter-island telephone link. 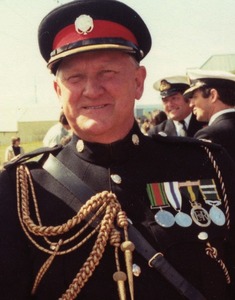 Phil Summers began his working life as a messenger for the Electrical and Telegraph Department in August 1942, rising to clerk by 1944. In 1950 he was in the Posts and Telecommunications Department, then moved on to the Public Works Department in 1952. During this time part of his duties involved taking wages in cash to the government peat cutters wherever they were working, and to the lighthouse, where new accommodation for the lighthouse keeper was under construction. He was promoted to senior clerk in 1960.

Summers was a long serving member of the Falkland Islands Defence Force, joining as a band boy in 1943 and rising to the rank of major in 1978. He was in command of the force from then until his retirement in 1983. During the royal visit in 1957 he acted as chauffeur to the Duke of Edinburgh. Summers was also a volunteer in the Fire Brigade. 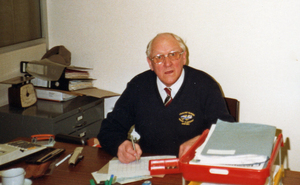 Phil Summers in the Falkland Islands...

In the early 1950s Summers led a very popular six piece dance band called the Melody Makers, obtaining sheet music of the latest dance tunes from England. In partnership with Ken Mills he also had 'the radiogram', described as a modified radio and record player, with microphone and two ex army loudspeakers, which produced music from 78rpm records for dances. This venture brought in much needed extra funds for both families. Summers also spent some evenings working as technician and announcer in the Broadcasting Station, and helped out as projectionist at Joe Booth's cinema in the Parish Hall.

In March 1967 Summers was appointed acting administrative officer at Grytviken, South Georgia for eight months, accompanied by his wife and the three youngest children. On his return to Stanley he joined the Treasury as senior clerk and in 1973 was promoted to deputy financial secretary. In 1981 he was appointed deputy chief secretary, a post he held until his retirement in 1983, when he and his wife left the Falkland Islands to live in England. Not content to rest, Summers then worked as accountant two days a week in the Falkland Island Government Office in London, until his death. 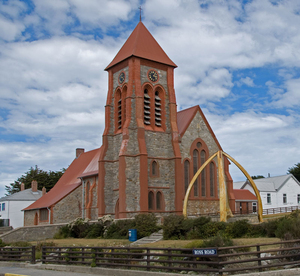 The church was an important part of his life, and Summers was a church warden at Christchurch Cathedral for many years. Until the 1970s the diocese included South America and in 1976 Summers went, with Desmond KING and Leslie Halliday, to meet Donald Coggan, the Archbishop of Canterbury, at Lambeth Palace to discuss the split in the diocese, when the Islands became directly linked to Canterbury. After his retirement to England Summers continued his personal contribution to the church as a member of the Falkland Islands Cathedral Restoration Committee.

Summers' rapid rise in government service was due to his exemplary record, integrity and sheer hard work. The amount of other community based activities he packed into his spare time was exceptional, in an age when it was necessary to do everything for yourself, including cutting peat for fuel and growing vegetables. He died at his home in Market Deeping, England in 1991.