FIDS and policeman, was born in Stanley in 1929, the eldest child of a Falkland Island mother and an English father who had settled there after World War I.

In the mid ­l930s, his parents moved back to England with their five other children, leaving him in the Falklands with his grandparents.

As a teenager, he worked as a Morse-code operator in the Post and Telecommunications Department and took an active part in the Boys' Brigade and in the Defence Force, and in sport. He was a crack rifle shot, who represented the Falkland Islands at Bisley, narrowly missing the Queen's Hundred. 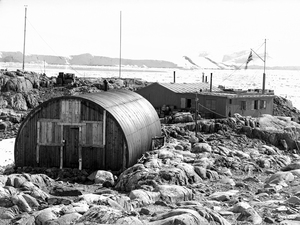 Early in 1948. Richards found himself at Port Lockroy, Wiencke Island, in a four-man party under the leadership of George Barry, his other two companions being the Falkland Islander John BLYTH and Ken Pawson, an adventurous young man responsible for a minor incident during their stay. Pawson had already taken Blyth - no mountaineer - on an ascent of the local snow-covered Jabet Peak (545m) and now planned to row in the base dinghy with Blyth and Richards the few miles to Doumer Island for a one-night visit. They reached Doumer Island safely but were then held there for several days by drifting ice. Meanwhile, Barry at the base was extremely worried, as the party carried no radio. He passed on his concern to Dr (later Sir) Vivian FUCHS, the overall field commander based at Marguerite Bay, many miles to the south and powerless to assist. The three travellers eventually returned to the base after an absence of six days, following a change in sea-ice conditions.

Richards spent his second year in the Antarctic, 1949/50, at Deception Island under the able leadership of Gordon Stock, a veteran of the 1947/48 winter at the Argentine Islands.

In 1951 Richards married Thora Biggs, a Falklands girl, and in the same year they took up a two-year posting to the government station at Grytviken, South Georgia. In 1956 the couple followed the rest of his family to England. Richards then joined the Metropolitan Police, in which he rose steadily through the ranks to become chief superintendent of Greenwich Borough, controlling 'R' Division, before retiring in 1985. 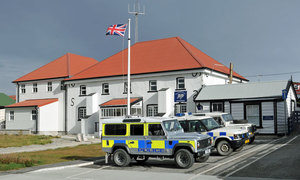 During the Falklands War in 1982, Richards advised the Foreign and Commonwealth Office on possible landing sites for British forces, and he later made several journeys down to the Falklands to advise on reforming the local constabulary.

In England he was especially solicitous of wounded Falkland veterans by visiting them in hospital. In 1983, for the last two years of his police service, he was seconded as chief of police in the Falklands. 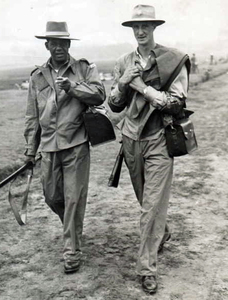 Following the death of his wife in 1995. Richards remarried in 1997 and moved back to Stanley. He was survived by his second wife, Shirley, and by a son and a daughter of his first marriage.

See: The history of the BAS base at Port Lockroy