His grandfather Christian Salvesen had arrived in Scotland from Norway in 1851 and built up a successful shipping and agency company based in Leith. Christian's son, Theodore, bought and started whaling stations in Iceland, the Faroes and Shetland.

In 1908 the company went south to start a whaling station in the Falklands at New Island, followed a year later by one at Leith Harbour, South Georgia. Salvesen also ran a fleet of floating expeditions operating first around the South Shetlands and the Antarctic Peninsula and later in the Antarctic oceans round the globe.

Salvesen was educated at Edinburgh Academy. He joined the Indian Army in 1916 and retired as captain in 1923. He then graduated at Oxford and stayed on at New College as a lecturer in economics. He joined Christian Salvesen & Co in 1928. Formidably intelligent and strong-minded, he devoted himself to the Salvesen whaling business, and quickly became the leading expert on Antarctic whaling among the British and Norwegian companies who dominated the industry up to World War II. 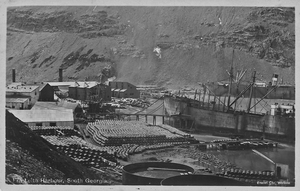 517 Leith Harbour when Henriksen was...

He spent several seasons in the Antarctic in the 1930s both at South Georgia and on the floating factories. He played a prominent part in the negotiations of that time between the whaling companies to restrict catch and preserve stock levels, and successfully defended Salvesen against a Norwegian union claim that all crews should be Norwegian. As a result of this, with the cooperation of the British seafarers' unions, the British share of Salvesen's whaling crews was substantially increased, reaching half after World War II.

He was particularly interested in the technical development of whale processing and the elimination of waste with new by-products to supplement the traditional whale oil. The Salvesen floating factories and Leith Harbour stood out in technical efficiency. 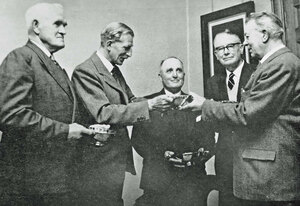 The neighbouring station of Stromness was incorporated and a large new floating dock set up there. Salvesen continued to go south at least once in three seasons, and took with him younger managers for their training. 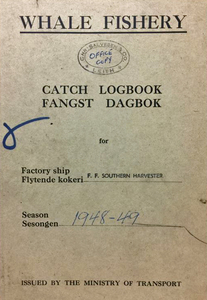 At home he became deeply involved in the International Whaling Commission and the problems of limiting catch to stop depletion of whale stocks when the original British and Norwegian companies had been joined by Dutch, Russian, Japanese and Panamanian operators. These efforts were fruitless and Antarctic whaling effectively ended around 1970. Salvesen's floating factory operations finished in 1963, and Leith Harbour finally stood down in 1965.

Salvesen was suspicious in his dealings with the Falkland Islands Government. He had inherited from his father Theodore the conviction that officials were not to be trusted, and this was confirmed by misunderstandings on a post World War I scheme, fortunately not carried out, for Salvesen to start a new whaling and sealing station in the Falklands. (New Island had closed in 1916). He also thought that the pomp assumed by some governors on their occasional visits to South Georgia was absurd (as did the whalers). But his relations with the succession of magistrates on the island, who shared many of his enthusiasms, were close and friendly. 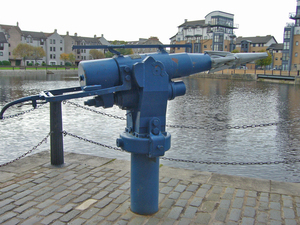 Salvesen harpoon on The Shore at...

He married Moira, neé Cameron, in 1933 and had two sons (one of whom died young) and four daughters. He died in Edinburgh on 1 February 1970.

See:  The last of the Salvesen Whalers (YouTube video)