manager, was born near Bolsover, Derbyshire on 23 June 1880, the third of the eight children of Dr John Slaughter and Edith Slaughter, née Jarvis. The early death of his father meant that money was too short to allow him to study medicine, and after two years on a dairy farm he sailed for Patagonia and joined the Waldrons and Wood farm at Delgado. Here he learnt every aspect of sheep farming, which also included hunting pumas and bartering with Twelshe Indians for guanaco skins, as well as such unpleasant tasks as plucking wool from disintegrating sheep carcasses. He soon proved himself a good rider and was allowed to choose his own colts and break them himself - which entailed staying in the saddle until the bucking ceased - a skill for which he became renowned. 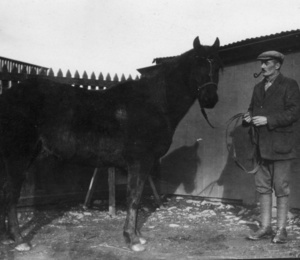 In 1908 he agreed to help a Chilean company with a sheep drive northwest through the Andes towards Lake Cochrane. Slaughter met up with the drovers on the River Baker: their flock had dwindled from 20,000 to 16,500 after three months on the trail. Descending the river, with repeated crossings, the sheep were caught by a flash flood with only 20 miles to go, and 12,000 drowned. Keeping two of the drovers (who were wanted for bank robbery) Slaughter camped out through a harsh winter, before returning by ship to Punta Arenas where he learnt that the Chilean company had gone bankrupt. He then went on leave to England.

In 1909, he went to run Waldrons' lands in the Matto Grosso in Brazil. It was a wild area, beyond the railhead, with Indians, squatters, a corrupt police force and tropical diseases afflicting men and horses. Deals in cattle were all for cash and Slaughter was an unusually good judge of character, who would advance money to buyers to acquire cattle for him. Although not normally a fighter, he led the workers from the railhead against the police who were brutal and corrupt. The police were routed and law and order restored. In 1914, he returned to England to enlist in the XVI Lancers and was wounded in France. He was then commissioned in the Glosters and served out the war, becoming a captain. 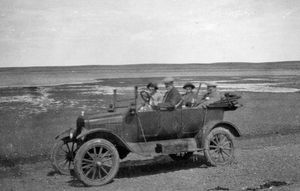 Still affected by malaria, he did not return to Brazil, but accepted the post of Camp manager for the Falkland Islands Company, based at Darwin. Slaughter arrived in 1919, and was soon engaged to Muriel, the daughter of George BONNER at San Carlos. They married in 1921 and had two children: Dick (b1922) and Eileen (b1923). As babies they were carried on horseback and from the age of four rode on cojinillas (sheepskins). Although there were no roads, Slaughter imported a Model T Ford and pioneered motoring south of Stanley. (The car featured on a Falklands stamp of 1988). Sometimes in summer he would drive as far as Mount Pleasant and then complete the journey to Stanley by horse. Family fishing picnics often ended with the shepherds coming with horses to tow the car out of soft ground. In 1925 the Irish yachtsman, Conor O'BRIEN, stayed at Darwin and through him Slaughter ordered a boat for the FIC - the Ilen, later sailed down to the Islands by O'Brien himself, arriving early in 1927.

The family left the Falklands in 1931 and the following year rented a farm in Gloucestershire. But prices were poor and in 1937 Slaughter sold up. In 1939 he managed a farm in Herefordshire originally to export Corriedale rams for Reginald POLE-EVANS and Robert Greenshields. The war put a stop to this, but he farmed on until 1948, when he retired. He settled by the Debden estuary in Suffolk, where the sailing was good. On 20 March 1962 he died at Wickham Market in Suffolk. He had been a highly respected employer, able to do any task he asked his men to do. He was quick tempered but never harboured a grudge and had a dry sense of humour. His horsemanship, both in the hunting field and abroad, was legendary.