Irish patriot, yachtsman and writer was born in London on 3 November 1880, the son of Edward William O'Brien and an Englishwoman, Julia Mary, née Marshall.

He was a grandson of William Smith O'Brien of the 'Young Ireland' political movement. Schooled at Winchester College, England, he graduated with a fourth class degree in natural sciences from Oxford in 1903 and practised as a naval architect from 1906 to 1914. 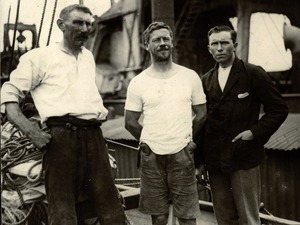 He was a patriot, a mountaineer, a fluent Irish speaker and outspoken Home Rule supporter who was involved in the gun running to Howth, Co Dublin, on behalf of the Irish Volunteers in July 1914 - an activity combining his sailing and political enthusiasms. This did not prevent him serving as a lieutenant in the Royal Naval Volunteer Reserve in World War I.

O'Brien designed two famous yachts both of which had close connections with the Falklands - the Saoirse and the Ilen. In Saoirse, ('Freedom') a 20 ton, 42 foot ketch designed and built in 1922 in Baltimore, Co Cork he made a famous circumnavigation between 1923 and 1925 - the first recorded by an amateur skipper from west to east. His account of the voyage, Across Three Oceans, (1927) became one of the classics of maritime literature. 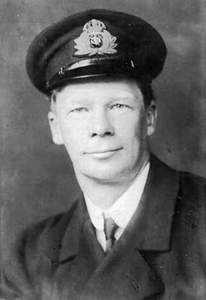 O'Brien as a Royal Naval Reserve...

On 6 December 1924 he 'put in most properly to the Falkland Islands being again short of potatoes'. He had sailed directly from Auckland, New Zealand in 46 days, covering almost six thousand miles and was, by chance, accompanied in to Port William by the Government yacht Gwendolin. He decided to spend just a few weeks in the Falklands (he stayed until 28 February 1925) and was famously entertained by both civic and private society in the Islands. His normally ascetic and critical description of landfalls was mellowed for the Falklands, apart from commenting on 'the amenities of Stanley - of which there are none' and the harshness of the climate:

'There is no soil, no warmth in the sun, no trees will grow, and only the hardiest weeds; though it is true that a few enthusiasts have constructed gardens in the lee of a stout fence and even reported to have raised potatoes therein.' 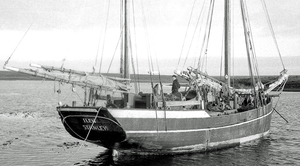 Indeed, he describes horticulture in even 'the more genial West Falkland' as 'a farce'. Otherwise he speaks highly of the hospitality received (especially in the West) and of the services given (freely) to him, his crew and the Saoirse. Nowhere else had he been afforded the luxury of lying up at the Government Jetty and Boatyard. The governor commanded the Seal Protection Cruiser to take him round the coast and he has vivid descriptions of colonies of penguins at West Point (which 'might have been in West Cork') and Carcass Island and fur seals on the Jason Islands. He commented on the favourable qualities of Tussac Grass as a cattle fee

O'Brien spent Christmas in Stanley and afterwards took his yacht to San Carlos to beach her and scrape down the hull. He eventually beached her in Camilla Creek to undertake the job. He humorously recalls being taken in the Ford at Darwin (imported by TG SLAUGHTER, the FIC camp manager) despite the absence of roads. O'Brien 'was commanded' to go on the mail steamer to the South Shetland Islands (past O'Brien Island) and he provides valuable and vivid descriptions of the nature of the whaling business at that time - 'apart from whales the South Shetlands have no excuse for existing'. During his absence Saoirse was well looked after at the Government Dockyard. He carved a coat of arms for the colony at the request of the Colonial Secretary. He returned to Ireland on 20 June 1925. 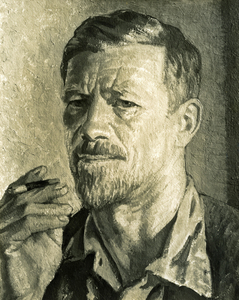 Portrait of Conor O Brien by his wife...

Either through his direct contact with TG SLAUGHTER on the Falklands, or a reported chance contact in London (when he went to change a Falkland Islands one pound note) he was asked to design a service vessel for the FIC. The Ilen (named after the river which flows into Baltimore where she too was built) was finally launched in the spring of 1926. O'Brien, having personally supervised the construction of the 56 foot auxiliary ketch, also undertook to deliver the vessel to the Falklands. She sailed for the Falklands from Ilfracombe, Devon on 31 August 1926 with O'Brien as skipper and two local Cape Clear seamen as crew (the cousins Denis and Con Cadogan). During her delivery voyage Ilen put in at several ports including Mar del Plata in Argentina, whose claim to the Falklands found favour with O'Brien.

O'Brien and the Ilen reached the Falklands on 8 January 1927 to a warm reception. The vessel subsequently plied the waters of the Falklands profitably for nearly 50 years. She was eventually returned to Ireland (in November 1997) for restoration in Dublin and exhibition in the Hunt Museum, Limerick. The Ilen featured on the 35p value Falklands stamp in the 1998 issue 'local vessels'. 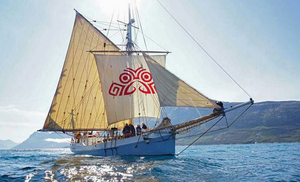 O'Brien continued to sail but was deemed too old for active service in 1939. He did however serve the Allied cause as a skipper for the Small Ships Pool, delivering support vessels across the Atlantic. In 1928 he married the artist Katherine Clausen, though she died tragically in 1936. O'Brien retired in the west of Ireland, living with his sister, and died on Foynes Island, Co Limerick on 25 April 1952. 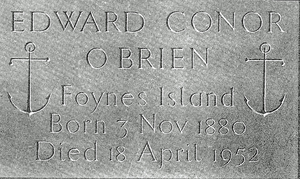 Judith Hill, Judith; In Search of Islands. A life of Conor O’Brien. Cork. The Collins Press; 2009