FIC colonial manager, was born in East Wemyss, Fife, Scotland on 28 October 1928, the only child of James Sloggie and Agnes Sloggie, née Smith.

He was educated at Dumfries Academy, gaining his Scottish Highers in 1946. After a short period with the Clydesdale Bank he was conscripted into the Kings Own Scottish Borderers and later the Royal Engineers serving as a cartographer in the Middle East for most of his two years service. Back in civvy street, again with the Clydesdale Bank, and dissatisfied with career prospects, he applied for and gained a post with the Standard Bank of South Africa, working in London before being transferred to Nairobi, Kenya in December 1951, where he was put in charge of a department. Postings to Dar es Salaam, Lindi and Mtwara in Southern Tanganyika followed: where he thoroughly enjoyed life, sailing, swimming and fishing in the wonderful waters of the East African Coast. 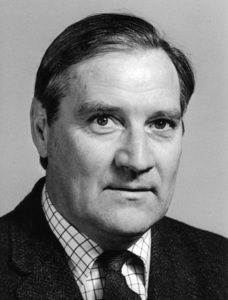 In 1955 he was again posted to Nairobi where he met and married Noeline, elder daughter of Noel BIGGS, late of the Falkland Islands. They had two daughters, Allison (b1956) and Fiona (b1959). In 1957 he joined Kenya Co-operative Creameries as accountant and in 1962 was transferred to Uganda Creameries in Kampala, Uganda. With life becoming increasingly difficult after independence, he noticed an advertisement in the East African Standard. The Falklands Islands Company was looking for an assistant manager in Stanley. Frank MITCHELL of London Office flew to Entebbe for the interview resulting in the family leaving East Africa in 1964.

Passage to the Falkland Islands was on board RMS Arlanza to Montevideo and onward by RMS Darwin to Stanley. The family arrived together with the new governor Cosmo HASKARD and his wife. Captain White, Master of the Darwin told Sloggie that the large welcoming crowd for the new governor were mostly Noeline's relatives curious to see the man she was bringing home! 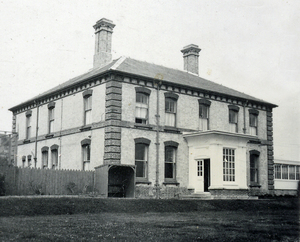 Quickly settling into the Falklands he enjoyed the varied life, learning how the FIC worked and meeting farmers and the local people, and sorting out the relationships! His first four year tour saw many changes and one or two excitements. Always a keen rifle shot, he joined the Falkland Islands Rifle Association and during his leaves in 1968 and 1974 formed part of the Islands team at Bisley.

Whilst on leave in 1968 he was offered the position of colonial manager in Stanley. He accepted, and held the post for the next six years. He and his family moved into Stanley House which had been the residence of all colonial managers since it was built in 1878 and provided a wonderful setting for the hospitality and entertaining that the job required. 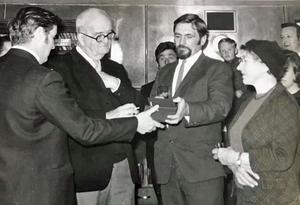 During these years the Islands and the Company were in a state of flux. The British Government was encouraging Argentina to take an active interest in the Islands resulting in visits from many 'experts', politicians and journalists from both the United Kingdom and Argentina. The FIC steamer was withdrawn. The Argentines were invited to provide a temporary airstrip and air connection to take her place. Sloggie was appointed to ExCo by Governor LEWIS. He was very involved in the various negotiations, always with the real interests of the Falkland Islands much in mind and not happy about the way things were going.

In 1974 the Company decided to abolish the position of colonial manager and to close Stanley House. After much heart-searching Sloggie decided not to return to the Islands at the end of his leave. He joined the National Farmers Union as a group secretary, firstly in Yorkshire and then in Suffolk where he remained until he retired. He loved the work and soon gained the friendship and respect of everyone he met. He retired in 1993 and enjoyed eight very active years wood-turning, sailing and travelling, before succumbing to cancer.

Editorial comment:   See image 1567; The RMS Darwin was first commissioned in 1957 and came off service in the Falkland Islands, (and was sold) in 1972.  Captain Ken Archibald was the last  ship's Master of the Darwin - but only for six months. The previous long-serving Master - Captain Nigel Miller - had secured another post on a banana boat. Under Ken Archibald the Darwin did a couple of long trips - one to Punta Arenas, in Chile, for some prospective buyers,  and also a trip to Comodoro Rivdavia, in Argentina, to land school children travelling onward for education at the British School in Buenos Aires.