businessman, was born in Barking, Essex on 5 April 1923, the only son of Francis and Lena Sophia, née Edwards. Educated in Essex, the outbreak of war in 1939 disrupted his further education and career plans and following service in the Home Guard he joined the Army at 18 in January 1942. He served with an amphibious unit of DUKWs in Europe in 1944-5 and was then sent to Palestine until demobilisation at the end of 1946. 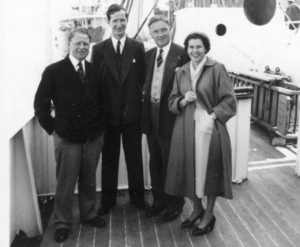 He followed a strict career plan in civilian life, gaining experience in manufacturing, wholesaling and insurance whilst acquiring a professional commercial qualification. He joined the Falkland Islands Company in June 1950 and relished the challenges of working for a Royal Chartered Company with its diverse interests. His first visit to the Islands was in June 1953 when he stayed for some months to learn about the Company's trading and their agency operations in Punta Arenas and Montevideo. During this first visit he developed a high regard for Islanders and their way of life but realised that the Company needed to make changes at farm settlements, particularly in the treatment of single workers after working hours and in the greater utilisation of farm buildings.

Mitchell was also concerned over the economic struggle of the Falkland Islands Government and the disparate taxation payments of the British registered companies, including the FIC between the UK and the Falklands. The Korean War, for example, brought about a sharp increase in wool prices and farm profits reached record levels but for FIC aggregate taxation exceeded 66% of which only 17½% accrued to the Islands. Relations between the Falkland Islands Government and the FIC were strained after the Ajax Bay freezer debacle and representations about taxation were particularly sensitive. However, the situation changed when Edwin ARROWSMITH became Governor. Mitchell prepared and submitted a paper on behalf of all British registered companies proposing changes in the system of taxation which would be highly beneficial to the Falklands. These were, basically: 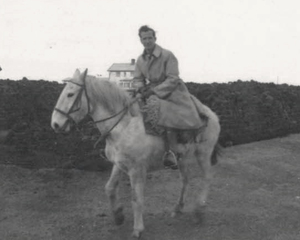 Frank Mitchell at Fitzroy in...

The proposals, although not affecting locally registered sheep farms, were surprisingly not well received in treasury circles in Stanley but the governor wanted them pursued and invited Mitchell to attend a meeting of ExCo to elaborate on them and to respond to questions, which he did. Legislation was introduced and resulted in very substantial revenue increases for the Islands without increasing the overall taxation liabilities of the British companies. At the same time Mitchell brought to an end the anomaly of a high proportion of FI Government subsidy for the mailship operation being lost to the UK by registering Darwin Shipping Ltd locally, which resulted in a taxation liability only arising there.

In 1968 Mitchell became embroiled in political controversy following the disclosure by unofficial members of ExCo that the British Government had reached a Memorandum of Understanding with the Argentine Government over sovereignty of the Islands. With no independent presence in the UK, AG BARTON sent Mitchell a copy of their appeal to British parliamentarians with a request that he organise media support and meetings for him prior to his arrival in the UK. This Mitchell did and shortly afterwards was introduced to a Lincoln's Inn barrister, Bill Hunter CHRISTIE, by the FIC chairman, a Lincoln's Inn solicitor. The two quickly formed a strong relationship which proved crucial to the Islanders' cause with Christie providing the political contacts and lobbying experience and Mitchell the organisational expertise, although it was vital that he remained in the background because of his commercial links which could be misconstrued. Mitchell was hon secretary of the Falkland Islands Committee from 1968 to 1972 and subsequently from l972, following the takeover of the Falklands Islands Company, joint hon secretary with Bill Christie. Their campaign was wholly successful. 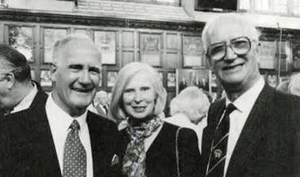 Frank Mitchell (on right) at...

Mitchell recognised that there was little alternative to paternalism for the Company's employees and set about improving their lot. The Provident Fund was switched from Company contributions related to dividends to contributions based on profit. The fund which had been wholly invested in gilt-edged securities was reinvested substantially in equities utilising a facility which was available to residents of the colony but not to those of the UK. The change brought about very substantial increases in the value of the fund which exceeded one million pounds prior to his retirement. All employees were given a written form of agreement outlining their rights, notably to pensions which were non-contributory and generous. A prosperity bonus was introduced based on wool prices.

He was appointed company secretary in 1955 and later London manager before being appointed managing director in 1973. He retired in 1987. He recalls one incident in his career with particular satisfaction. In 1975 the Port of London was brought to a standstill by a strike which occurred when the Company's charter vessel was at Gravesend. Because locking the vessel in port would deprive Islanders of essential supplies he prevailed upon dockworkers to work the vessel, with the normal payments for loading and unloading being made to the dockworkers' committee and donated to charitable causes. The agreement brought about threats from the union involved that if the payments were not made to them future ships of the FIC would be blacked, but nothing ever happened.