colonial secretary, was born in Edgbaston, Warwickshire on 8 June 1881, the son of Edward Cocks Johnston, surgeon. (The addition of 'St.' was a later affectation.)

He was educated at Queen Elizabeth College, Guernsey and Cheltenham College, going on to Birmingham University, to study law at the Middle Temple and medicine at Westmister Hospital. 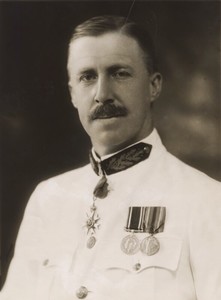 From 1907 to 1917 he served in various judicial, medical and administrative appointments in Fiji, until he was seconded for war service in France. He was then attached to the War Office for special duty (for which he received the thanks of the Army Council) and was promoted brevet lieutenant-colonel.

In 1919 he was posted to the Falkland Islands as colonial secretary, and in effect acting governor as Sir Douglas YOUNG was about to depart on retirement leave. St Johnston's health was poor - the Spanish influenza 'had played so much mischief with me in France'. 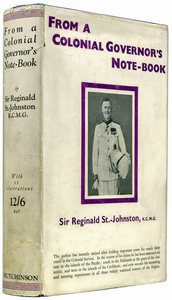 From a Colonial Governor's notebook

He saw himself as an up-country administrator and observed that he had 'not the remotest idea about the many little observances that appertain to a Governor's life ... I should particularly have to take on two new spheres of work, those of Governor and Colonial Secretary simultaneously'.

He believed he was the first doctor on record to be made colonial secretary or acting governor. St Johnston arrived on the SS Kenuta on 19 September. He enjoyed his relatively brief spell on the Islands: he conducted a census of trees in Stanley (there were 54) and had the track to the Naval Wireless Station at Moody Brook made into a driving road. He claims to have worked out a scheme for a metalled road system across Camp, to be marked by permanent posts. He presented a baked clay Babylonian inscribed brick to the new Museum in the Town Hall, but alas it was placed under a skylight and dissolved when snow leaked through. 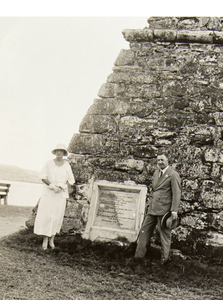 Colonial Governor and his wife...

Leaving the Islands in April 1920 on the Orcoma, he was presented with an address. He was in good spirits:

By this time my health had very much improved, I had put on weight and lost the blueness of my lips which had previously so much worried my doctors; so that in a way the Falklands became for me a health resort, rather than the reverse.

He had a distinguished career in the West Indies thereafter: as colonial secretary in the Leeward Islands (1920-25), administering Dominica, Antigua and St Kitts/Nevis on various occasions between 1925 and 1929.

He was governor of the Leeward Islands from 1929 until his retirement in 1936 and was awarded the KCMG in 1931. During World War II he returned to military duties and joined the Ministry of Supply in 1942.

In 1906 he married Alice Lethbridge. St Johnston was a prolific writer: he lists sixteen books in his entry in Who's Who. One of them published in 1919 was The Falkland Islands whose author was simply given as St J. Most of his writing is on colonial themes and From a Colonial Governor's Note-Book has a chapter on the Falklands, from which the quotations above are taken.