salvationist and clergyman, was born in Stanley on the 24 February 1924, son of a Norwegian sailor named Ole Albert Stevensen and his wife, Alice Maud Stevensen, née Rowland. His father had jumped ship, from an inbound whaler, in Stanley; hiding in the peat stacks until the ship left. Albert Stevensen's life in the Falklands was uneventful apart from two life-changing events. Through the ministry of Forrest McWHAN he came to know Jesus Christ as his personal saviour when in his mid-teens. The second was the outbreak of World War II, and the garrisoning of the Falklands. He volunteered to join the British forces, with other young Falkland men, and left the Falklands in 1944, returning only once for a short visit thereafter. 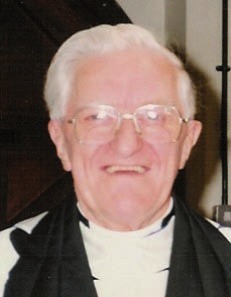 Their journey to the United Kingdom took nearly two months via the west coast of Africa, and Stevensen, no Viking, was seasick for much of the time. He was in uniform within a week of landing, and attended a reception on the 30 March 1944 at the Colonial Office, with his comrades. Of his service career his time in Jerusalem was especially significant, and on demobilisation he sought the full-time Christian ministry that he knew to be his vocation. On the 14 May 1948 he was commissioned into the Salvation Army in a ceremony at the Royal Albert Hall. On the same day Forrest McWhan led a service at the Tabernacle in Stanley to mark the event, and at which a letter from Stevensen was read. Most of his Salvationist career was based in East Anglia, and this may have been because, with no other British geographical ties, he had seen RAF service there. In this peripatetic ministry he met his wife, Madge (Margaret) Hill, also a Salvationist, and they married on 29 July 1950. They had two sons.

Then a further career change took place. He joined the Church of England and after training at Wycliffe Hall Oxford in 1961 he was ordained priest in 1963 and took up the demanding role of chaplain at Brixton Prison from 1964 -70. He had contact with some of those he met in that ministry for the rest of his life, and could count a number of successful conversions during these six years. Such a role could not be endured for long and his next step was to parish ministry at St Stephen's Wandsworth. In doing so he became the first and only Falklander to be a Vicar (and probably the only Salvation Army captain and prison chaplain too). Retirement at 64 was occasioned by heart problems that finally resulted in one of the first quadruple bypass operations to be carried out in Britain. He and his wife retired a few miles from Wandsworth to a house owned by one of their sons. Stevensen was a fine preacher, often adding tales of his childhood in the Falklands to his talks to the children in church, and a kind and generous man. He was proud of his Falklands heritage, and much enjoyed the annual reunions in London. He died on 7 January 1996 in Wimbledon, following a stroke. His wife died on 19 February 1999.

Bert was commisioned in 1949. I was at the Albert Hall, with his two sisters, Joyce and Thora, and other members of the family. I still have the programme.