dentist, was born on 7 June 1912. He qualified as a Licenciate of the Royal College of Surgeons, England, in 1936. In 1937 he arrived at the Falkland Islands when his registration date for that year enabled him to function as colonial dentist, a Government appointment which at that time allowed private practice additional to the requirement to treat Government employees and their dependents free of charge. He thus became a member of the staff of the King Edward VII Memorial Hospital then headed by the senior medical officer, Dr George Kinnaird. 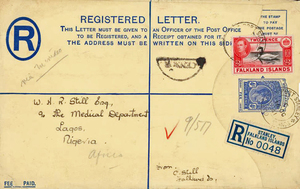 Still's scientific contributions to the history of health in the Falkland Islands were noteworthy and the most important of these was his disproving the allegation that Islanders were constitutionally subject to excessive bleeding so that all Falkland Islanders undergoing surgery suffered excessive blood-loss after operations. This myth was widespread so that Still was told before he left England that there were many haemophiliacs in the Islands. He therefore, during his three-year tour, examined the records of 1500 dental patients of whom 1200 had had dental extractions and found that only three showed evidence of such a tendency and none were true haemophiliacs. Nor did patients in the hospital theatre show evidence of excessive bleeding after general surgery in this period, despite the allegations of severe problems in this respect by Dr Innes Moir, principal medical officer, in his report for 1932. Still's investigations were in part included in Dr Kinnaird's annual Medical and Sanitary Report for 1939.

From 1943 to 1949 Still practised in Lagos, Nigeria, returning to Colchester in 1950. He later practised in Suffolk. Still arrived in the Falkland Islands as a young single man but when he left he had a wife, for he married Miss Christine Hoare, daughter of the headmaster of the government school. He later married again and Maire Esther Still survived him when he died on 6 August 1983. Roland Still was a popular, caring and efficient dental surgeon whose thorough research disproved a harmful myth about the health of Islanders.